Inside the music of mexican drummer-composer-singer Israel Varela is a rare mix among mexican, andalusian, and contemporary jazz colors. Ultimately, though, the surprising Mexican artist from Tijuana has figured a way to integrate all three seamlessly in this dynamic and creative drumming and compositions, blending traditional forms with contemporary flamenco, and mexican traditional rhythms”.

Born in 1979 in Tijuana, Mexico, Israel grew up in a family filled with singers, pianists, guitarrists and orchestral conductors. He began to perform in public at the age of five, singing and playing piano. Years later at the age of twelve he began doing gigs as a drummer with the best Tijuana local Jazz bands, and studied under Gonzalo Farrugia, and Andrei Tchernizev. A major turning point in his life happened in 1995 when his talent was discovered by the great Alex Acuna. At the age of fifteen he was studying in Los Angeles privately under Alex Acuna (1995-1998), and later under Dave Weckl (1998-2000) also privately. On 2000 he moved to Milan where he studied at the G. Verdi Conservatory. On 2003 he moved to Seville to explore all the demanding techniques, rhythms & harmonies of Flamenco Music under the great Diego Amador, Luis Amador, and Miguel Vargas at the gipsy village 3000 viviendas. This became an important period for Varela as during this period he developed his own voice as a drummer and as a composer knowing the flamenco tradition and using his own original style to add to it. Currently he lives in Rome, leads his own Israel Varela Trio and Made in Mexico duo w/ Karen Lugo.

photo: from booklet ‘As Above So Below’ 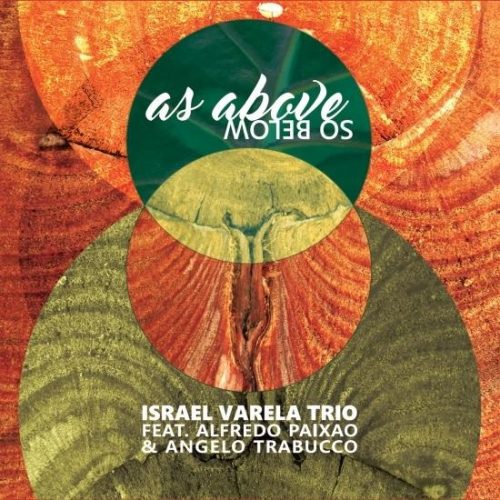