The Festival Strings Lucerne was established in 1956 by Wolfgang Schneiderhan and Rudolf Baumgartner. The regular ensemble consists of 17 string players and a harpsichordist but also expandable to a larger chamber orchestra according to the specific repertoire. The Strings owe their special sound both to the masterful instruments owned by the ensemble, which were produced in the legendary workshops of Cremona by Stradivari, Guarneri, and Amati, and most certainly to their great performance tradition. The concertmaster Daniel Dodds served as Artistic Director since 2012.
The orchestra tours extensively throughout Europe, appearing at prominent festivals or concert halls and is a frequent guest ensemble at Lucerne Festival. Past overseas tours have taken the Strings to South America (2007), USA (2008), Japan (2009) with concerts at TokyoSuntory Hall, South Korea (2010) with concerts at Seoul Arts Center, and to China (2010, 2011) with concerts at among others Beijing’s NCPA, Beijing Music Festival, Festival Internacional de Música de Macau, Shanghai Oriental Art Center and Guangzhou Grand Opera. The Strings has been back to South America in 2013. 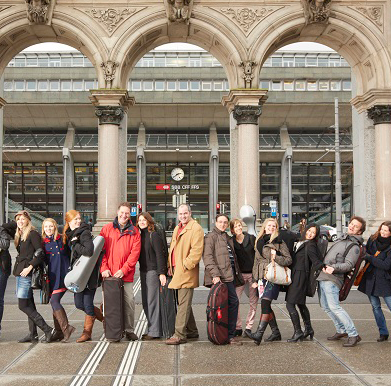