Dutch mezzo Ruth Willemse studied at the Conservatory of Amsterdam and graduated at the Prince Claus Conservatory in June 2013. As a singer with a strong and easy high register, she is currently moving into the higher mezzo Fach in the French, German and Italian repertoire.

At Dutch National Opera, she debuted as Maddalena in Reimsreisje (an adaptation of Rossini’s Il viaggio a Reims for children). At Dutch Touring Opera, she could be heard as both the Old Lady and Paquette in Bernstein’s Candide, Kate Pinkerton in Puccini’s Madama Butterfly and Berta in Rossini’s Il barbiere di Siviglia. Other roles include Miss Todd in Barber’s The Old Maid and the Thief, Concepcion in Ravel’s L’heure espagnole and Cornelia in Handel’s Giulio Cesare (the latter under the baton of Michael Chance). At the Royal Concertgebouw, she participated in a concert performance of Madama Butterfly. Ruth Willemse has performed several times on Dutch national radio.

Ruth Willemse participated in a Wagner masterclass by Nadine Secunde, Dunja Vejzovic, Siegfried Jerusalem and Wolfgang Brendel. Moving into the Zwischenfach/Falcon repertoire due to her strong top register, she is currently preparing roles such as Brangäne, Venus, Vitellia, Komponist, Cleopâtre (Massenet) and Desdemona (Rossini’s Otello).

photo: from booklet ‘Where Corals Lie’ 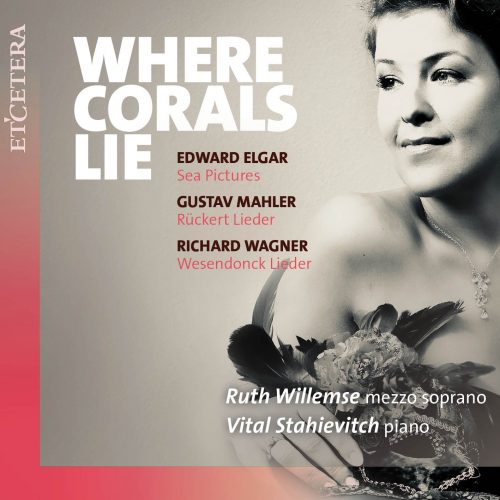