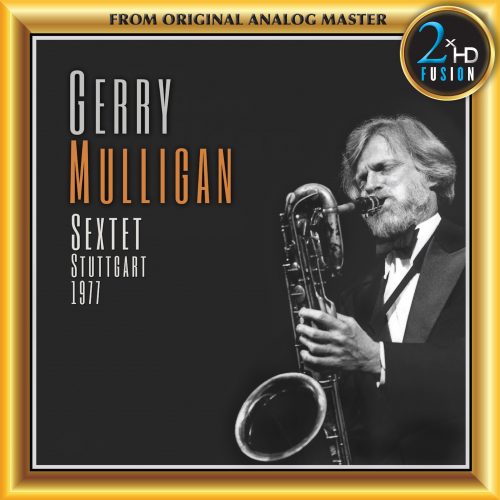 [Not available to listeners in the U.S. due to licensing restrictions]

Together with Gil Evans and Miles Davis, the 20 year old Gerry Mulligan conceived the revolutionary nonet music for Birth of the Cool. In Stuttgart, at age 50, he was already looking back on a career spanning almost thirty years and was much in demand. The fact that he wrote fascinating film scores and won Grammys for them in the ‘70s, not to mention his burgeoning interest in jazz-rock fusions, once again highlighted this extraordinary musician’s exceptional openness and creative potential.

This Stuttgart concert shows that the ever self-critical jazzman never let his identity slip. It was evident in his choice of players; rising stars such as vibraphonist Dave Samuels or guitarist Mike Santiago proved they could harmonise with experienced greats such as bassist George Duvivier as if they had been doing it all their lives. Like Ellington, Gerry Mulligan always preferred his jazz “IN A STATE OF BECOMING”.

The first and last tracks are worth the price of admission. These tunes travel all over, visiting several different styles, showing the resourcefulness of the players. What most surprised me, the casual Mulligan fan, is how fresh and contemporary these performances still sound. Unlike some cheesy recordings from the late ‘60s through the ‘70s, this is serious jazz, without gimmicks or compromise. While the players visit older styles and tunes, they never sound like they are “mailing it in.” Every tune is played with passion (and an attention to detail you don’t often hear). It’s easy to recommend this recording. Though I’m offering it as an afterthought, the sound is as good as the playing. This record is a treat and recommended for serious jazz listeners.

Mulligan is as much the master of the progressive sound in ’77 as he was in ’54. And while back then he was intent on showing what an ensemble could do without a piano, the piano is back for the sextet. Thomas Fay plays piano, Dave Samuels, the vibes, Mike Santiago, guitar, George Duvivier, bass and Bobby Rosengarden plays drums. It is a tight ensemble and the music is cool jazz with a fine touch and a modern edge.

“For An Unfinished Woman” opens the album with an extended opportunity for solo work by all members of the sextet. Fay does a nice bit on the piano and Duvivier works with the bass. Together, the ensemble builds to a dynamic climax. The laid-back “Line for Lyons” is Mulligan’s tribute to West Coast DJ Jimmy Lyons and dates back to the ’50s. “K-4 Pacific” closes the album with a dynamite 13 minutes of power with some big-time work by Rosengarden on the drums.

Gerry Mulligan in 1977 is at the top of his game. You can never have too much Gerry Mulligan. Listen to his elegant “My Funny Valentine,” and you’ll hear what I mean.

Should you have any questions as to why Miles chose Gerry Mulligan to accompany him on the precedent-setting Birth of the Cool, this previously unreleased 1977 recording will settle whatever querulousness or qualms that may briefly arise. In Legends Live, Gerry and the band are muscular and inventive, as modern as anything of the time, and when the ensemble lays back in the opening cut, For an Unfinished Woman, letting Mike Santiago loose on guitar, it’s evident that they’d been listening to everything, letting nothing slip by. Half way through the solo, Bobby Rosengarden breaks things down in a righteous drum sidestep and, from there, all the solos enhance and break with the melody, at times bordering on dissonance yet never losing sight of the vision.

Besides the aforementioned, you of course get Mulligan on baritone sax, Dave Samuels on vibes, Thomas Fay on piano, and George Duvivier on bass. Not a one of those cats is less than stellar, turning in work that must’ve had the audience turning backflips in their seats. For ten minutes, the cut wends on until all and sundry are in bliss. This concert took place in Germany, and Europe has always loved jazz, perhaps even more strongly than American audiences, so that affinity is returned to the onlookers in the band’s performances. There’s a backbone to the gig that’s solid as the rock of Gibraltar.

Most of the cuts here are Mulligan’s own compositions, with two outstanding standards for garni, and you’d swear the sextet had all chipped in, so strong are the contributions. It’s just one wave of traditional, West Coast, and new-groove cool after another. The recording’s extremely well converted from source masters, retaining all the old analogue warmth so that not a gram of, say, the melancholic asides in Funny Valentine goes wanting for nuance. This album shows that the glory days of jazz are about to undergo a renaissance.

A great live side of Gerry Mulligan that we hardly ever get to hear. A cool set of cuts from that time in the 70s when Mulligan was really opening up his sound. Working here on both familiar baritone and fresh soprano sax, in a combo that also includes great vibes from Dave Samuels and guitar from Mike Santiago too! The tunes are loose and free – almost a later Stan Getz sort of approach, and quite a change from the tighter Gerry of earlier years. The vibes are especially nice, and help bring a rhythmic pulse to the album that really works well with the soprano sax. Tracks include “K4 Pacific”, “For An Unfinished Woman”, “Line For Lyons” and more.