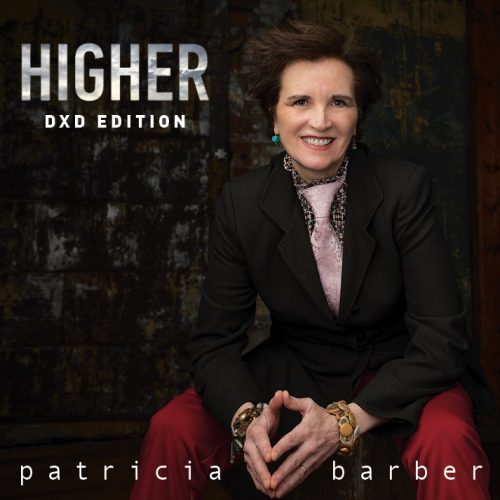 (Though labelled as ‘5ch’, this recording’s multichannel download is 5.1.)

At High End Munich in 2019, the world’s largest audio show, a special event was held.  It was a preview of what Merging Technologies calls “a remarkable album” – singer, pianist, and composer Patricia Barber’s latest music project “Higher”. Barber is a veteran of the Chicago Jazz scene and has received rave reviews of her albums in the audiophile world for many years.  The preview at High End Munich provided the invited listeners with a rare opportunity to hear the album in its recorded DXD resolution in Stereo and 5.1 Surround Sound.

Until now, listeners could experience Higher as a Stereo CD and Stereo Download.  There were also a few chances for audio show attendees to hear Higher in DXD Stereo if they tracked down a Merging Technologies audio demo – or knew the way to Claude Cellier’s listening room. Since that time, many have wondered when they might have a chance to hear this album in its full Stereo and Surround Sound glory.

Now, NativeDSD is very proud to join Patricia Barber, the production and engineering team of Jim Anderson and Ulrike Schwarz at Anderson Audio NY, Seth Godin (Artist Share), and Abey Fonn and Robert Bantz at Impex Records with the worldwide debut of Higher in DXD Stereo, DXD 5.1 Surround Sound as well as DSD Stereo (up to DSD 512) and DSD 5.1 Surround Sound (up to DSD 256).

DXD has been a revelation for veteran producer and recording engineer Jim Anderson, an 11-time Grammy Award Winner.  He has established a formidable reputation as an engineer specializing in jazz and acoustic music. His initial involvement with surround came from film music mixing, but his first music-only project was with Patricia Barber and her album “Modern Cool” that won the Grammy and led to two highly successful surround sound albums with Jazz Soprano Saxophone player and Composer Jane Ira Bloom.  Ulrike Schwarz sums it up by noting “Once you start with DXD, there is no going back.”

“Throughout my career as a singer, pianist, and songwriter, I’ve been pushing the boundaries of songwriting. I’ve recently been drawn to writing songs that combine lyrical poetry with a rich harmonic language, pulling from classical music as well as the circumscribed system of harmony in jazz and classic American song. Shulamit Ran, composer, friend, and mentor, has been instrumental in teaching me how to access a limitless harmonic vista. This album features “Angels, Birds, and I…,” a new song cycle that portrays this musical adventure, pushing the frontiers of my songwriting all the way into art song. I’m happy to say that classical singers as well as jazz singers are performing these songs.

In 2015 I had the honor of performing “Angels, Birds, and I…” along with other songs of mine at Chicago’s Harris Theater with the incomparable Renée Fleming. Together we also toured my songs in concerts in NY and Washington D.C., and in 2016 Renée sang them at a Carnegie Hall recital. Her performance of “Higher,” a song I wrote for my mother, at the sold-out 4,152-seat Krannert Center for the Performing Arts in Champaign-Urbana, was a gift she gave me I will never forget.

In 2016 Augusta Read Thomas and the Ear Taxi New Music Festival asked me to open the festival with these songs. I was honored by the request. The songs are at once “contemporary” and indebted to traditional jazz and classical harmony—art songs that are unique to my synthesis of sonorities and forms, and offer a new landscape for singers and instrumentalists.

In addition to “Angels, Birds, and I…,” this album will include some instrumentals and covers, just for fun. We also hope to find an operatic soprano to sing one of the art songs, for my listening pleasure! and yours, of course.

Please join me as I share with you this very personal journey.”

Though labelled as ‘5ch’, this recording’s multichannel download is 5.1.

Listening to the 2 Channel. JRiver covert to 192kHz to play through my Marantz SA-14SE. Wonderful dynamics and layered Sound Stage. Thinking how it could sound when played in Native 352.8kHz.
I am not familiar with DXD, this is my first download of this format.
Waiting to check the Surround version, hopefully another level.