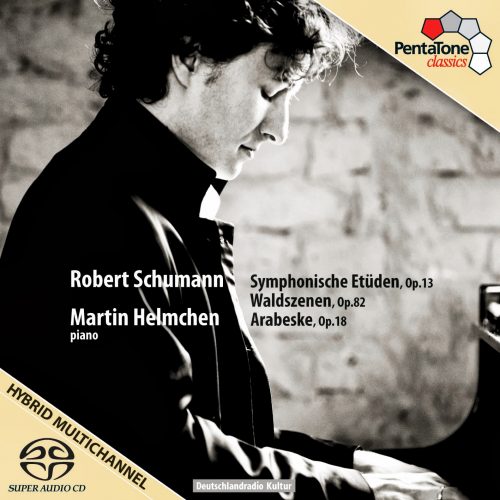 I am affected by everything that is happening in the world, politics, literature, people – in my own way, I think about everything, which then bursts to the surface through music, trying to find a way out.  That is why so many of my compositions are so difficult to understand – because they are linked to distant interests – and often also striking: for all that is strange grabs my attention, and I then have to express it again in music”.  Thus Robert Schumann wrote to his fiancée Clara Wieck in 1838.

The Waldszenen (Forest Scenes) comprises nine short pieces and has similarities in both style and character to the famous set of Kinderszenen (1838). These are not merely light and affectionate as the title might suggest and soloist Helmchen fluidly communicates a broad range of feelings and emotions including a strong sense of determination, drama and mystery.

As the basis for his Symphonische Etüden Schumann used a C sharp minor theme by Baron von Fricken, an amateur musician who was the adopted parent of Schumann’s sweetheart Ernestine von Fricken. On this recording Helmchen has included additional pieces that Schumann had withdrawn from the set prior to publication. Helmchen here blends precision and penetration with subtle shades of colour.

Schumann composed his Arabeske during a time of considerable emotional turmoil. He had been forbidden to see his future wife Clara by her disapproving father and could only communicate with her through letters and music. Helmchen adeptly and crisply negotiates the changing moods with fluency and charm.

Recorded in 2011 Helmchen has the benefit of fairly close and crystal-clear sound. Helmchen plays splendidly and is beautifully recorded.