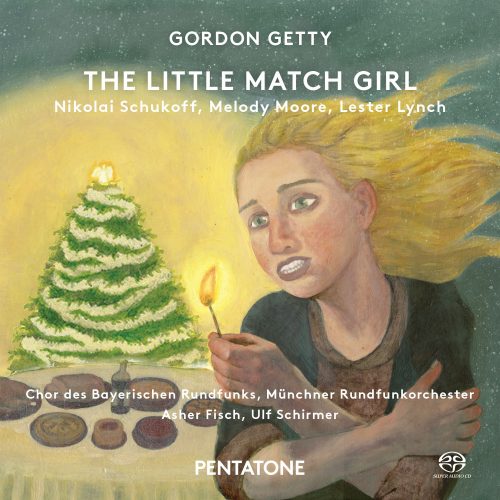 As is often the case in the vocal compositions of distinguished American composer Gordon Getty, many of the pieces collected in The Little Match Girl are based on, or inspired by, poetry from the nineteenth and early-twentieth centuries. This SACD starts with “A prayer for my daughter” for chorus and orchestra, based on the poem by William Butler Yeats which is, according to Getty, “…one of the most admired works by one of the most admired poets of the age”. It is followed by “Poor Peter” for tenor, chorus and orchestra, with lyrics by Getty himself inspired by Poe and again Yeats. Then follows the titular “The little match girl”; the heart-breaking fairy tale by Hans Christian Andersen, put to music more or less word-for-word in a challenging setting for the orchestra and particularly the chorus. The disc concludes with “Joan and the bells”, Getty’s own narrative of the trial of Joan of Arc, about which he said, “It was the genius of Shaw that inverted this safe literary tradition and brought out the spunky teenager in Joan. Jean Anouilh went farther, in The Lark, and gave her the simplicity of preadolescence. Joan and the Bells owes much to these masters, particularly Anouilh, and takes the same poetic license. It is a tale of a child’s faith in an age without childhood, of a valour undeflected, and of the redemption these qualities commend.”

Multichannel Album of the Month Award for December 2015

This is one of the most dramatic and involving recordings I have heard in a long time. The orchestra, chorus and soloists are precise and appropriately dramatic. The recording is amazing in it’s emotional wallop and dynamic range. The soloists are placed across the front spread between the front speakers, while the surrounds get a sense of the hall. It’s demonstration quality and reminds me of the old thrilling Columbia recordings with Leonard Bernstein, but here the impact is greater with a high resolution DSD recording from start to finish. If you have doubts about multichannel and the extended frequency response of DSD, this recording will put all of those reservations to rest.

This recording by the Münchner Rundfunkorchester and the Chor des Bayerischen Rundfunks was conducted by Asher Fisch and Ulf Schirmer respectively. It features magnificent soloists such as tenor Nikolai Schukoff (“Poor Peter”), soprano Melody Moore (“Joan and the Bells”) and baritone Lester Lynch (“Joan and the Bells”).

I’ll search out more of Getty’s music after hearing these compositions. He’s an intriguing composer with a highly interesting background. Pentatone has created one of the finest recordings I’ve heard this year. It is a superb collection of Gordon Getty’s works, with a stunning surround sound DSD recording. Recommended!