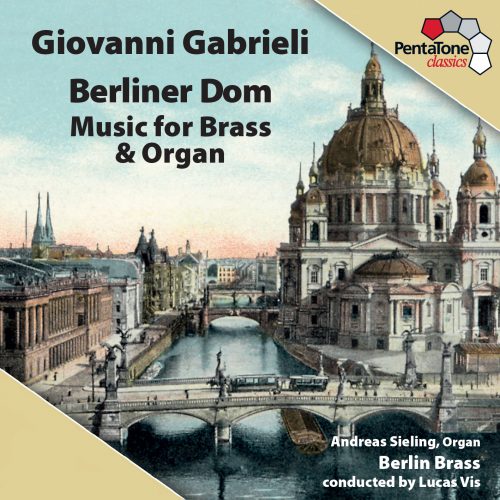 Giovanni Gabireli was born in Venice somewhere between 1554 and 1557. His Father died at an early age, so he was probably brought up by his uncle Andrea Gabrieli. The latter was the organist of the San Marco, as well as a repsected composer, and a former pupil of Orlando di Lasso.  Following in his uncle’s footsteps, Giovanni Gabrieli spent several years as a young man at the court of Albrecht V in Munich. However, he returned to Venice no later than 1585 and, as his uncle before him, was appointed organist at the San Marco.

“For those with surround sound systems, this PentaTone release of works by the 17th century Venetian composer Giovanni Gabrieli (ca.1555-1612) will be an absolute must have. It was recorded in February 2013 in Berlin’s largest church, a building whose vast interior is capable of evoking the sonorous spaces of San Marco, Venice where the composer was organist for much of his life. Amazingly for a building with such a large reverberation period the sound of the various groups on this 5.0 DSD recording always remains clear and distinct. This is due not only to the skill of the engineers from Polyhymnia in managing the challenge of a cathedral acoustic, but also to the clean articulation and incisiveness of the playing throughout. Both musically and sonically this disc is a feast for the ears! ”

“An outstanding recording that should be part of every audiophile’s collection thanks to its magnificence of sound.”

“Pentatone’s Gabrielli SACD is a knockout! Gabriell’s music and here it is heard as the composer intended when he wrote it. We are taken back to the 17th century and find ourselves in a spacious resonant cathedral, in this case the Berlin Dom. This is a sonic multi-channel treat taking full advantage of the SACD medium. Don’t miss this one!”