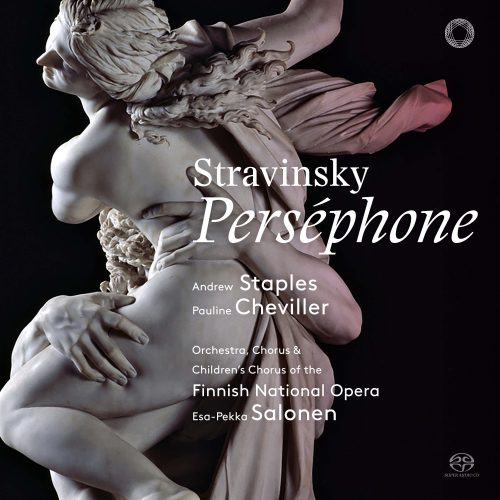 Stravinsky’s Persephone (1934) is a dynamic music-theatrical narration of the myth of Persephone’s abduction to the underworld and return to earth. The transparent, sober but evocative music epitomizes Stravinsky’s sensuous take on Neoclassicism, and the piece showcases Stravinsky’s eclectic, original and highly personal approach to music and musical drama through a playful mixture of several genres melodrama, song, chorus, dance and pantomime. Ultimately, Persephone offers Stravinsky’s second ode to spring, albeit without the brutal excesses of Le Sacre.

This album was recorded live during the Helsinki Festival 2017 with a star cast featuring English tenor Andrew Staples and French actress Pauline Cheviller. They join forces with the Finnish National Opera’s chorus, children’s chorus and orchestra, conducted by Esa-Pekka Salonen, in a breath-taking performance that lifts out the piece’s transformative power.

Radiant beauty is not a quality that is automatically associated with Stravinsky’s music. But in Perséphone, the “melodrama” for tenor, female narrator, chorus, children’s chorus and large orchestra that he completed in 1934 to a text by André Gide, he composed one of the most radiant and lyrically beautiful scores to be found anywhere in 20th-century music. It’s one of Stravinsky’s greatest achievements, and alongside his opera-oratorio Oedipus Rex, one of the high points of his neoclassical period, though perhaps because of the forces it requires and its curious hybrid nature – part ballet, part cantata – performances and recordings have always been rare.

Perséphone was written for the dancer Ida Rubinstein, who had already commissioned Stravinsky’s Tchaikovsky-based ballet Le Baiser de la Fée six years earlier. Rubinstein both danced and spoke the title role at the Paris premiere, which was not well received. Gide’s text puts a Christian spin on Homer’s original story; instead of being abducted and raped by Pluto, Perséphone goes down to Hades of her own volition, out of pity for the lost souls of the underworld. But the text is a discursive patchwork of short episodes, and Gide also objected to the way in which Stravinsky set his jewelled words; the two parted with the composer accusing the writer of “a complete absence of rapport, which obviously originated in your attitude.”

But the extraordinary thing about Perséphone is how the score as a whole utterly transcends the dramatic shortcomings of the text, as well as its own stylistic unevenness. There’s choral writing and narrative passages for the solo tenor, who takes the role of the priest Eumolpus, that seem both to hark back to the French classicism of Gluck and to echo elements of the Russian Orthodox liturgy, alongside other moments that almost recall Offenbach and even Massenet.

As Esa-Pekka Salonen’s beautifully modulated performance demonstrates, however, those inconsistencies do not matter at all when the music is unfolded with such meticulous attention to detail. Nothing is forced, and all the elements, sung, played and spoken, are integrated so carefully. Salonen conducted the score in London two years ago with the same tenor soloist, Andrew Staples, and the same Francophone narrator, Pauline Cheviller, as on this recording, which stems from a concert performance at the Finnish National Opera in Helsinki a year ago. There are moments when the sound of the orchestra seems recessed slightly too far behind the voices, but every morsel of detail in the scoring, which uses a large orchestra with chamber music-like fastidiousness, is there, and glowing.