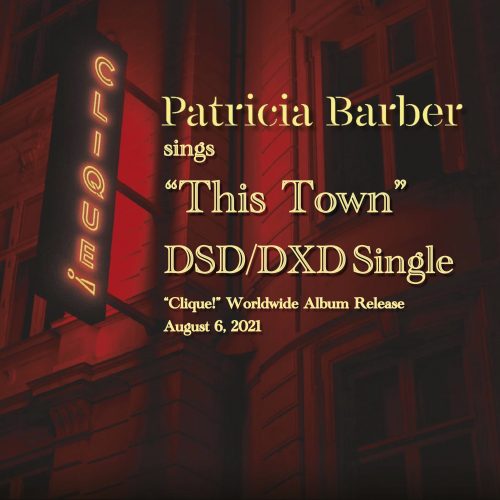 This Town, a song composed by Lee Hazlewood and made famous by Frank Sinatra, is now available to listeners worldwide as the first Single from Patricia Barber’s upcoming album Clique!

This Town (DSD & DXD Single) is available to listeners worldwide from NativeDSD in Stereo and 5.1 Surround Sound DSD (up to DSD 256) and DXD as well as Stereo DSD 512.

Patricia Barber breathes new life into her latest single, “This Town” — the 1967 song made popular by Frank Sinatra.

Her tender approach to the lyrics of this Lee Hazelwood hit comes juxtaposed with the fiery edge of her piano playing, in signature Barber fashion. Her new album Clique! due out August 6 finds her reimagining standards by the likes of Thelonious Monk (“Straight, No Chaser”), Stevie Wonder (“All in Love is Fair”) and Rodgers and Hammerstein (“Shall We Dance?”).

Her solid cast of players includes Patrick Mulcahy on bass and Jon Deitemyer on drums, who join her on “This Town.” Elsewhere on Clique, she also features Jim Gailloreto on tenor saxophone and Neal Alger on acoustic guitar.

And as on her 2019 album Higher, a product of the same recording sessions, Barber links up once again with multiple Grammy award-winning producer Jim Anderson — who recorded, mixed, and mastered the sessions in DXD.

For the moment, I can only talk about the first track of the new Patricia Barber album Clique! – This Town.

I’m waiting for the availability of the full album. 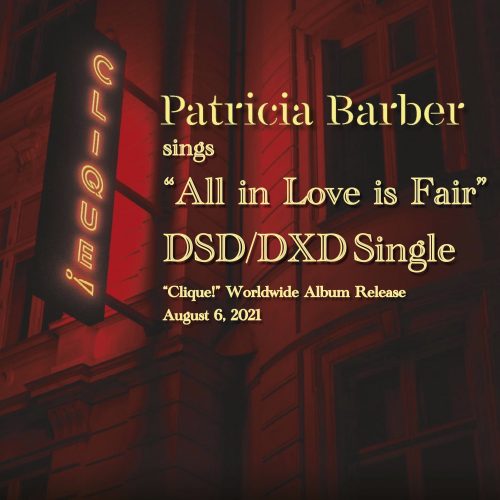 Patricia Barber sings All In Love Is Fair (DSD/DXD Single)