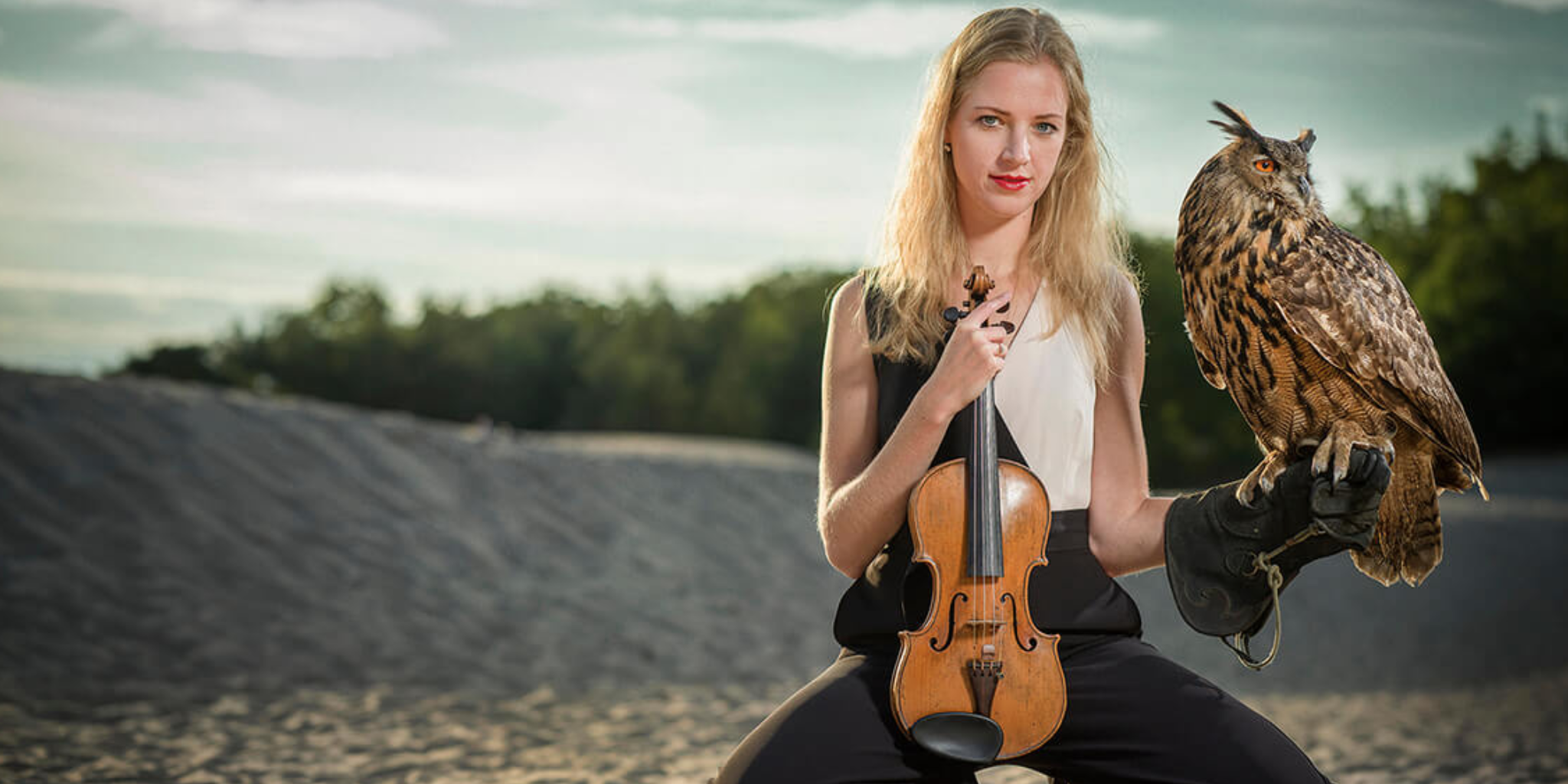 Reviewer Mark Werlin returns to the NativeDSD Blog with three DSD reviews. Each of them features works for duos and they are all recorded and released by the TRPTK team. We hope you will enjoy the read!

Dark Fire”, TRPTK’s new DSD album of solo and duo works for cello, brings the immediacy and excitement of a house concert into your listening room. A house concert is a great way to hear live music. The barrier between performer and listener is removed. Audience members can talk with the players, meet the composers, and become acquainted with works that do not often appear on mainstream concert programs. The musical performances on “Dark Fire” recreate the house concert experience.

For this album, cellist Joachim Eijlander selected a group of early-20th century works for solo cello, and cello duos with duduk (a double-reed instrument of Armenian origin), guitar, accordion, and piano. The range of the cello extends from deep, guttural low notes to a supple high register, offering composers a broad spectrum of sound for creating unaccompanied works. The template of solo cello compositions was perfected by J.S. Bach, whose unaccompanied suites for cello still challenge students of the instrument. In the 20th century, the rediscovery of Bach’s cello suites paralleled the development of new solo works for the instrument.

The first composer in the program, Achmed Adnan Saygun, was a musical prodigy. He left his homeland of Turkey in 1928 to study in France; the encounter profoundly shaped his subsequent work. A research trip in Anatolia with Hungarian composer Béla Bartók deepened Saygun’s appreciation for his own country’s musical traditions. Conversations with Bartók during that time led Saygun to explore in greater depth the expressive character of string instruments: violin, viola and cello.

Joachim Eijlander opens “Dark Fire” with Saygun’s “Partita for Solo Cello”. Threaded with folk themes and Near Eastern scales that convey the traditional culture which Saygun aimed to preserve, it also belongs to the musical world of Saygun’s teacher, Vincent D’Indy, and the great French composer Claude Debussy.

This was my first exposure to Saygun’s music. Something magical happens when hearing a new piece that doesn’t imitate other works, yet feels familiar. Eijlander reveals deeper layers of emotion and meaning that made an impact on this first-time listener.

Two short duets for cello and duduk, played by Eijlander and Kadir Sonuk, complete the first part of the program. The duduk’s voice-like tone resonates with the antiquity of its 5th-century origins. Eijlander writes that playing with Sonuk encouraged him to improvise; you can hear him stretch out beyond the written notes.

The next solo work is Gaspar Cassadó’s “Suite for Solo Cello” from 1926. The Spanish cellist and composer Cassadó enjoyed a long and successful career, from his early student days with the cellist Pablo Casals, to his close friendship and musical partnership with the preeminent interpreter of Spanish piano music, Alicia de Larrocha. The Suite is one of Cassadó’s most popular and enduring works. Under Eijlander’s bow, it sings, springs and glides through three delightful dance-form movements.

Guitarist Izhar Elias is the partner in two duets by Cassadó. The guitar’s range overlaps that of the cello, making for a dialogue in similar registers. Elias brings out the Iberian soul of these works, especially in the melancholy “Lamento di Boabdil”. Balance between the two players is skillfully managed by engineer Brendon Heinst. The Spanish portion of the program now concluded, Eijlander dazzles us with a virtuoso performance of the showpiece “Toccata for solo cello” by the Georgian composer Sulkhan Tsintsadze.

The final portion of the program transports us to Soviet-era Georgia, the musical landscape of composer Sulkhan Tsintsadze. Like Cassadó, Tblisi-born Tsintsadze was a performing cellist, and a prolific composer of chamber music, symphonies, concertante works, and film soundtracks.

The five pieces by Tsintsadze are firmly rooted in 19th-century tonality, with branches that enfold the song forms of the composer’s homeland. The seamless interplay of Eijlander with pianist Helena Basilova and accordionist Vincent van Amsterdam in these brief works leaves the listener with a desire to hear more by these exceptional artists.

Credit for the high quality of this release belongs not only to cellist Joachim Eijlander and his duo partners, but to TRPTK engineer and label chief Brendon Heinst, and to his partner in this venture, executive producer Gilles Stoop. A music lover and audiophile, Gilles Stoop took the next step of musical patronage beyond attending performances, to organize house concerts in his home and support the production of albums on the TRPTK label.

In this ambitious project, violinist Merel Vercammen explores a multitude of musical styles in improvised duets. If an unaccompanied solo is the most unguarded form of performance, duets are the most intimate form of dialogue. In classical music, duets are often structured as a soloist supported by an accompanist, but in Merel Vercammen’s “The Zoo”, duets are the framework for equal instrumental voices. In each of the 25 improvisations, performed with cello, fortepiano, grand piano, organ, vocal, accordion, and baritone saxophone, there is an encounter, a meeting of minds.

Improvised solos are recognizable as a hallmark of jazz music, but classical musicians also build performances on improvisation. Beethoven was celebrated for his keyboard improvisations, which he later recast in the formal structures of piano sonatas. In modern-day concerto performances, cadenzas, unaccompanied passages by the solo instrument, are often improvised by the soloist.

Improvisation is not playing the first notes that come into your head. Musicians carry around a personal encyclopedia of music they have studied and performed. Jazz musicians know by memory hundreds of popular standards and jazz instrumentals. Classical musicians who trained at conservatory draw on a different but equally rich musical tradition.

“Seal”, the entrance into “The Zoo”, is the first of four duets with cellist Maya Fridman. Listen for the response of the two players to each other’s ideas. The piece begins with soft, sustained, bowed notes by both cello and violin. When Fridman begins to play pizzicato (plucked strings), Vercammen echoes her. The players pause for a measure of rest, then the cello re-enters with a minor key melody accompanied by plucked strings on the violin. Roles are exchanged; the violin picks up and further develops the theme to the accompaniment of plucked cello strings.

Merel Vercammen’s selection of the order of the 25 pieces on “The Zoo” emphasizes differences between the various combinations of players, contrasts in style and mood, and I recommend playing the album in that order. Because I planned to review Maya Fridman and Vercammen’s duo EP “Silent City” for this article, I also listened to the four violin and cello duets in a playlist sequence, as if they were movements of a musical suite (tracks 1, 11, 15, 20). Try this yourself; it’s like finding a secret place in “the zoo” where you can hear the intimate and intuitive communication between the two players.

It is impossible to do justice to the breadth and scope of this album in a few paragraphs. Briefly: the duets with fortepianist Rembrandt Frerichs weave together strands of 20th century classical and new improvisational music. (I recommend Frerich’s Just Listen album “The Contemporary Fortepiano” to interested listeners.) The first of three duets with baritone saxophonist Ties Melema, “Elephants”, lurches into the sonic territory of free jazz. A furious onslaught of saxophone bellowing sends the violin into a dust cloud of double-stopped chords. The meditative “Snow Leopard” draws softer sounds out of the baritone sax. The three duets with organist Jaap Zwaart elicit flourishes from the violin, in dramatic contrast with the towering sounds of the church organ.

In the liner notes, the selections on the album are divided between “The Zoo” and “Endangered Species”, animals that are disappearing due to encroachment from human development and the effects of climate change. It is possible to listen to this remarkable album as pure musical expression, but it deepens in meaning when heard as an artistic perspective on this global challenge.

In the early months of 2020, the pandemic closed concert halls and curtailed the work opportunities for professional musicians. In response, violinist Merel Vercammen and cellist Maya Fridman performed a set of three duets, without an audience present, in the hushed environment of the Nicolai Church in Utrecht.

Producer-engineer Brendon Heinst conveys the meditative character of the music, allowing home listeners to imagine we are present with the musicians in the chapel’s spacious acoustic.

The brief program consists of a piece by Latvian composer Pēteris Vasks, “Castillo interior”, and two improvisations, the second of which was based on J.S. Bach’s Invention in E minor. The musicians are clearly in communion with the music, and with each other. “Castillo interior” flows like surging and receding waves through alternating slower and faster passages. “Silent City” builds on the thematic material of a folk-like melody; as the piece develops, listen to the contribution of the ‘third player’ – the chapel walls and towering ceiling.

Extempore variations on Bach celebrates the spirit of invention that runs through all three albums discussed in this article. It is a hopeful sign that classically-trained musicians such as Merel Vercammen, Maya Fridman and Joachim Eijlander, are crossing the boundaries of musical genres and taking up the time-honored tradition of improvisation.

Over the past year, many of us have watched livestreams and YouTube videos of musical performances, as we wait for the positive developments that will allow restarting of live concerts. A beautifully-produced companion video of “Silent City” can be seen here: