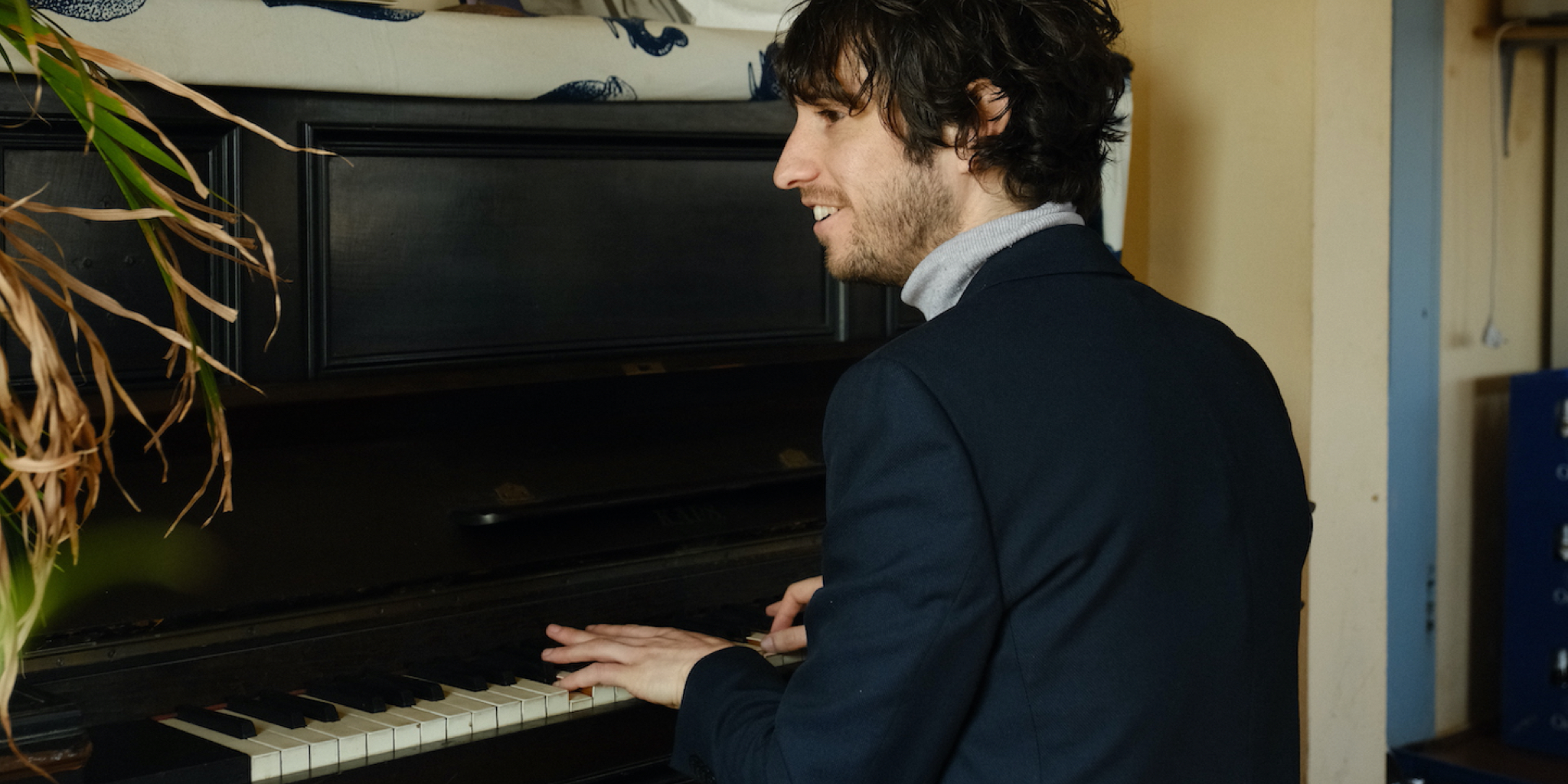 In a time when distancing and division override our common human need for social contact, a musical collaboration that bridges the distance between England and the Netherlands delivers a message of hopeful optimism with a strong dose of emotional honesty.

British singer-songwriter Matt Arthur’s encounter with Dutch singer-songwriter Jara Holdert at an open-mic evening in Amsterdam’s Café De Koe led to a long-distance musical exchange of ideas, with periodic meetings for in-person rehearsals and live shows. It’s a measure of their commitment to the project — and to each other — that they persisted in writing songs together via WhatsApp and FaceTime. Two years after that first meeting, they were invited by NativeDSD Co-Founder and Just Listen Records’ Co-Producer Jonas Sacks to record a performance in the intimate acoustic of Amsterdam’s Uilenburgersjoel synagogue, live in front of a small and quiet audience.

The well-crafted songs of The Coo evoke the British folk-rock of the late 60s and early ’70s while giving voice to the tone of contemporary experience. From the opening “Low Country Girl”, which sets the stage of a romantic encounter that was over too soon (“I cut the weight of my aching past, and she cut the line”), to the sharply-observed declaration of emotional independence in “About Time”, the songs progress through the troubled phases of a tenuous relationship. With deceptive simplicity, bolstered by the balance between the two songwriters’ voices, the narrative unfolds through crises of doubt and disillusionment towards a hard-earned goal of authentic, if imperfect, love.

The jazz studies curriculum that songwriter Jara Holdert mastered at the Conservatory of Amsterdam infuses her vocals with first-rate technique and expressiveness. Her harmony with partner Matt Arthur is that of two voices blending together while remaining distinct; each is muse to the other.

Too often, musical projects are one-off, owing to the economic constraints of the record business, and this year, the closure of live music venues. Support for projects like “The Coo”, on the label side from perceptive producers like Jonas Sacks, and on the listener side through download sales and streams, are the best hope for further developments in new, creative songwriting.

“Amsterdam Moon” is highly recommended for fans of the classic albums of Nick Drake and Sandy Denny, and for all listeners who appreciate thoughtful contemporary folk-style songwriting in superb audio.

Many musicians can play jazz and blues, but few can sing the blues with total conviction and emotional authenticity.

Dutch singer-songwriter Carmen Gomes is one of those few.

A father from the Mediterranean region endowed Carmen Gomes not only with a Spanish-sounding name, but by her own description, with a Mediterranean temperament. At the margins of the culture, the world’s differences meet; for Carmen Gomes, the language that gave her freedom of expression was not her native Dutch, but English; and the mode that encouraged her creativity was American jazz and blues. With a dozen previous albums in her catalogue, this accomplished singer, songwriter, teacher and vocal coach distills more than two decades of live performance and recording experience into “Don’t You Cry”, an hour of compelling jazz vocal music.

The selection and sequencing of the songs tells the story of a woman’s growing recognition that she must throw off the chains of love—false illusions, fears and insecurities—before she can find a more honest way of loving. From the opening “Unchain My Heart”, a 1963 hit for Ray Charles, through two songs associated with the great Nina Simone, “Don’t Let Me Be Misunderstood” and Simone’s own assertion of female sensuality “Do I Move You”, with stops along the way in the Deep South of the songwriter’s imagination (Ira and George Gershwin’s “Summertime”) and the historical reality (“How Long”, credited to Leroy Carr, originally written by blues woman Ida Cox), the listener finally arrives at Gomes’ original “As I Do.” It’s a one-hour trip from the depths of love’s oppression to the renewed hope for a relationship between equal partners, cast in the languorous mode of sultry jazz singing and subtle instrumental accompaniment.

Gomes’ stylistic technique extends past the conventions of behind-the-beat phrasing. Listen to how she teases out the syllables, as if the lyrics themselves were musical notes, not just words on a page. On “Don’t Let Me Be Misunderstood”, she prolongs the vowel sounds through several shades of inflection. With her flawless pitch, the effect is entrancing. You might hear echoes of Billie Holliday, but her vocal sound has developed well beyond imitation to distinctive individuality.

The ensemble Carmen Gomes, Inc. is more than a singer and a backing group. Bassist and Sound Liaison Co-Founder Peter Bjørnild, whose session notes are posted on the Sound Liaison website, produced the record, and arranged the songs in collaboration with Gomes, guitarist Folker Tettero and drummer Bert Kamsteeg. Tettero plays an archtop semi-hollow body guitar that has a warm timbre; his stylistic ears are well-tuned to blues idiom, especially the minor-key blues of the mid-1960s. Kamsteeg uses brushes throughout, and keeps superb time without ever overpowering the singer or other players. In bassist Peter Bjørnild, Gomes has found the deep instrumental ‘voice’ that complements her vocals, the glove that perfectly fits the hand. Their musical partnership is longstanding, and the trust that only years can bring is clearly in evidence.

The decision to record with a single-point stereo microphone came about after the group had already finished a recording session done with conventional multi-mic technique. The late delivery of a Josephson C700S stereo microphone prompted a test recording of a single tune. Afterwards, engineer and label co-owner Frans de Rond was so convinced that the sound qualities of that track should be heard on a full recording, he reconvened two more sessions that consisted of the group’s working repertoire, done almost entirely in single takes. Those sessions were recorded at MCO Studio 2, Hilversum, The Netherlands, on 26 October and 15 December 2018, in DXD (32 bit, 352.8 kHz PCM).

“With only one mic… mixing was no longer possible. We would have to make the complete sound stage right there by carefully moving each instrument closer or further away, as well as left and right, in relationship to the microphone.”

With an engineer of the capabilities of Frans de Rond, mixing is no longer needed. The careful placement of the musicians and the control of group balance makes “Don’t You Cry” one of the best-sounding “live in the room” audiophile recordings I’ve heard.

Not surprisingly, NativeDSD awarded “Don’t You Cry” NativeDSD Vocal Album of the Year for 2019. I eagerly await the next release from Carmen Gomes Inc.

The art of the poetic chanson flowered in the cabarets and coffee houses of post-war Paris within a tight circle of literary luminaries, musicians and performers. Many of its foremost figures came from elsewhere, drawn to the City of Light as the darkness of the preceding decade was just beginning to lift.

Throughout the 1950s and 1960s, these singer-songwriters exercised a profound influence on French popular culture, appearing on records, in concerts, on radio and television. Some of their songs became jazz standards, others inspired later generations of English and American pop musicians. To this day, the genre label “chanson” refers to the poetic songs of that era.

In this survey of chansons, singer Diana van der Bent and guitarist Paul den Bakker explore the many modes of the lyrics, from social satire to personal tragedy, in thoughtfully conceived vocal/guitar arrangements. The accompanying album booklet sets the context for the musical presentation, with excellent graphics, brief and pertinent biographies of the songwriter-performers, French lyrics, and English-language translations.

Tout Finit Par Des Chansons (It All Ends With Songs) was originally developed as a live theatre performance by conservatory-trained jazz singer Diana van der Bent and guitarist Paul den Bakker. The show was performed in The Netherlands at festivals and theatrical engagements, one of several different programs of music and poetry that van der Bent has conceived and staged. TRPTK label founder – producer – engineer Brendon Heinst invited van der Bent and den Bakker to record the show in the studio. Cellist Maya Fridman, whose remarkable albums on TRPTK should be in every NativeDSD listener’s collection, added cello parts to two songs on the album.

It is clear from the first notes of Leo Ferre’s “St. Germain-des-Pres” that Diana van der Bent possesses a fine, supple voice. Even more important for this material, she is an accomplished actor. These songs were written to be performed in front of audiences; to communicate the gamut of emotions and life experiences in the presence of listeners who shared those experiences.

This video of the Serge Gainsbourg song “La javanaise”, shot at Midvliet studio for the television program “And the Beat Goes On”: offers a closer view of the emotional shadings that van der Bent so vividly communicates not only through her voice, but through gestures and dramatic expression.

In the album liner notes, special attention is given to the life and work of singer-songwriter Barbara, neé Monique Serf. A French Jew born in 1930, Barbara spent her childhood in hiding during the Occupation of France by Nazi Germany. Her song “Goettingen”, recorded in 1964 after a stay in that German city, had a significant impact in the effort towards reconciliation of the French and German people. Diana van der Bent sings the German lyrics to the song in a deeply affecting performance.

Producer-engineer Brendon Heinst brings the intimacy of a performance directly to your home listening room. TRPTK’s original DXD-resolution recordings have a detailed and transparent “house sound” that captures the presence of the performers. Through a pair of Brauner tube microphones, the softly plucked strings and the luxurious roundness of the vocals seem to transport the listener back in time, to the smoky cabarets of post-war Paris, where the poetic chanson was born.