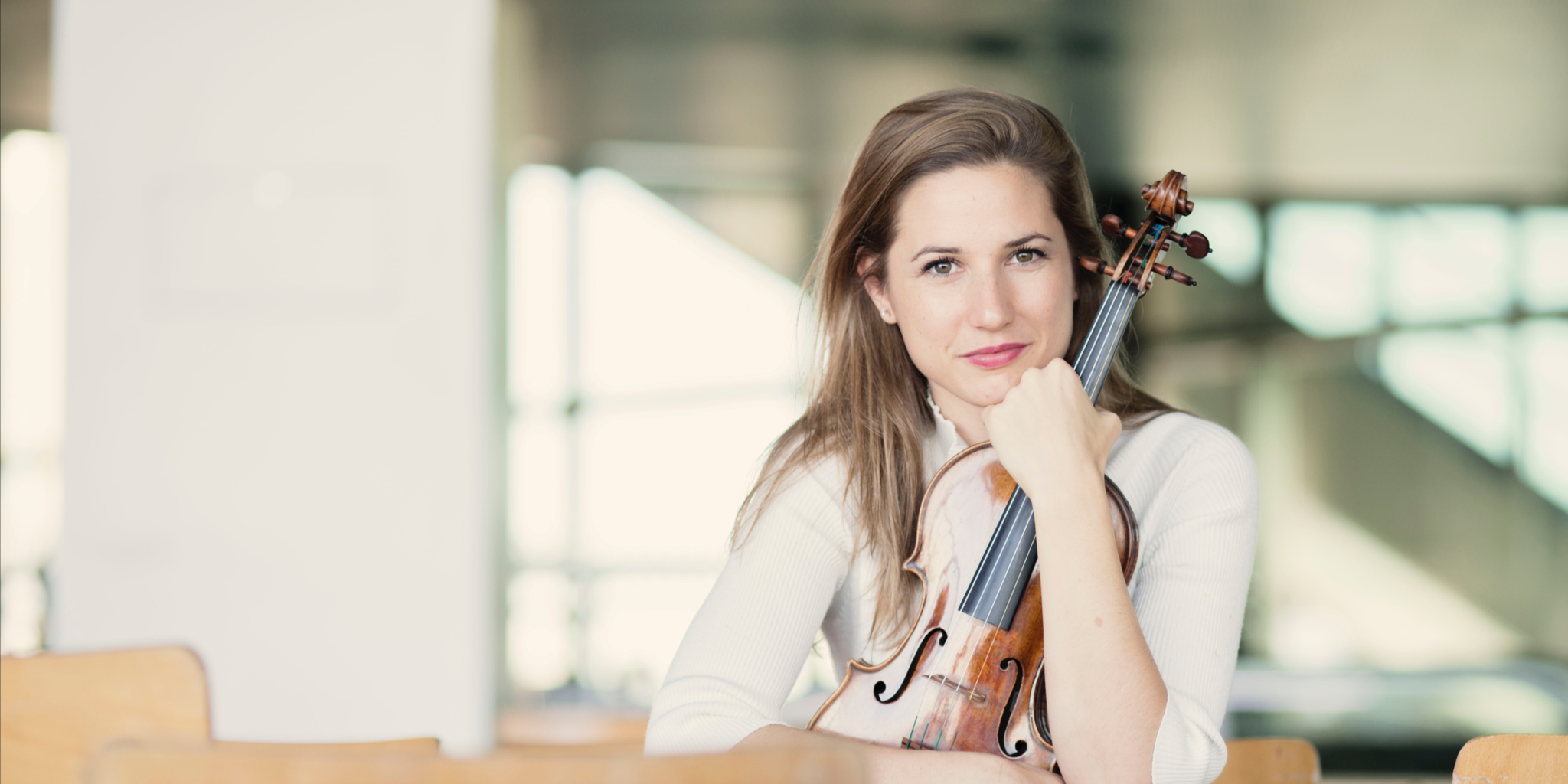 It is said that many good things have their origin in bad times.
The proof is here.

No matter what national policies had to be followed, fact is that over the past two years most of international cultural life came to an abrupt halt. Empty venues, concerts postponed, musicians hoping for better times. However, and thanks to creative minds, solutions were found. Like concerts given over the internet. The Dutch violinist, Rosanne Philippens, shaped her answer with this release.

In a personal comment (see the booklet) she writes: “Preparations for the present album have offered us much lightness in the dark months of the corona crisis. The timing was right: I dreamt at length about forming an ensemble of Dutch top musicians to record the Haydn violin concertos and the arrangement of the Stravinsky Divertimento in a play & direct setting. Empty corona diaries suddenly presented a short-term opportunity”.

The result is simply breathtaking. With imaginative and audacious programming, we are regaled to a dazzling account of two violin concerti embracing a gorgeous arrangement of Stravinsky’s ‘Le baiser de la fée’, signed James Ledger. And looking at the list of musicians, one wonders where all this talent comes from.

Less than a year ago, the Dutch violinist and teacher, Coosje Wijzenbeek, passed away, leaving behind a legacy of invaluable importance to the international world of music. She was, in fact, much more than a teacher. As a professional music pedagogue, she educated young and promising talent from the age of three onward with remarkable and far-reaching success. Janine Jansen and Noa Wildschut spring to mind. With this new recording, Rosanne Philippens confirms Coosje’s magic. A former pupil of Mrs. Wijzenbeek, she, too, developed into a world-class phenomenon.

A tribute to Vera Beths & the late Anner Bijlsma

I suppose that many will know that Vera Beths, violin teacher at the conservatoria in Amsterdam and The Hague, has also been instrumental in educating talented youth. But what is more, she went one step further by putting, together with her husband, the late cellist Anner Bijlsma, their stately home at Amsterdam’s Vondel Street generously at the disposal of numerous young musicians. Not only for ‘lessons upstairs’, but also, as we are told in the liner notes, and I quote: “downstairs life was discussed at the coffee table”. In short: ‘The Vondel’ was a breeding ground of talent in the widest sense of its meaning.

By drawing on these resources, it seems only logical that Rosanne Philippens named her newly formed ensemble “The Vondel Strings”, thereby paying at the same time tribute to the always welcoming hospitality of Vera Beths and Anner Bijlsma.

An inspiring leader makes the difference

Being a soloist in high regard is one thing, being able to lead an energetic group of aspiring players is quite another. Rosanne clearly is a person that can do both. Apart from listening to the recording, I took the time to watch the same on the YouTube channel of the Dutch Public Broadcasting NPO4. Standing with her musicians on the stage of an empty Concertgebouw in Amsterdam, known for its sublime acoustics, Rosanne doesn’t lead them like ‘ein strammer Stehgeiger’; she leads with Body, Soul & Eyes, thus inspiring her friends to give their very best.

There are, of course, similar bands, and Rosanne’s initiative caused me to draw a parallel with the Ensemble Esperanza, promoted and supported by the International Music Academy Liechtenstein, and led by an equally talented violinist, Chouchane Siranossian. It is a slightly larger group of young people, recruited from among the best Europe has to offer. No less than four from The Netherlands. One of them, Ruña ‘t Hart – another of Mrs. Wijzenbeek’s pupils – whom I knew from a recording session of Ensemble Esperanza in Austria, is now one of Rosanne’s top talented ‘Vondel Strings’.

Comparing both, my prime observation must be that it is the gift of youth to play with such eagerness and buoyantly ‘addictive’ engagement. There can be no doubt: With such genuine commitment, they will not fail to enchant any audience.

Is Stravinsky in good company, or is Haydn the lucky guy ?

It is good concert hall practice to pair familiar pieces with something modern, something that otherwise most of the audience would not go to a concert for. Unfortunately, not always an encouraging match.

Rosanne did it the clever way by selecting a piece from a contemporary composer that fits so remarkably well in between the two concerti that I believe it is not Haydn (or Tomassini) who should get most of the attention. Why?

‘Le Baiser de La Fée’ (The Fairy’s Kiss) “a bright work in romantic style” may not be Stravinsky’s best-known ballet, nor is its reduction for violin and piano entitled Divertimento often heard in concert. It is James Ledger’s finely tuned arrangement for violin solo and strings that is the lucky shot, recognized by Rosanne as a worthy centrepiece to shoulder the two lively violin concerti. One of which (No.1) is, by the way, said to be composed by the leader of Haydn’s small but capable Esterhazy court orchestra, the Italian virtuoso, Luigy Tomasini.

I suggest readers consult the well-written liner notes on these and other informative matters. Also, to get to know the names of all players, of which I should like to draw readers’ attention to one name in particular, the up-and-coming ‘next generation’ Dutch Violinist, Coraline Groen.

In the final analysis

James Ledger’s orchestration of Stravinsky’s Divertimento is new to me. But judging it on its own merits I admire the kind of craftsmanship put into it. Rosane’s playing is technically supreme, negotiating the virtuosi elements with ease without giving in to ‘showing off’, whilst expertly painting the different modes from sensitive to resolute into a most convincing Fairy Tale. The players follow suit with impeccable precision, turning Ledger’s Fairy into a balanced performance of equal souls.

If Haydn’s violin concerti were only made to amuse the Esterhazy household, then we should be pleased that Philippens cs. ably lifted them to a higher level, bringing out its delicate delight. To give them more weight I’ve heard them played too fast in the outer movement and too slow in the central part. Rosanne’s take is one of modest yet vibrant excellence, remaining with her Vondel friends honestly respectful towards the playful character of both concerti. A wonderful experience!

As good as it sounds

Jared Sacks must have put all his engineering, editing, and mastering skills into this recording. Not only to give Rosanne Philippens and The Vondel Strings their full due but also to lend full support to Rosanne in her wish to dedicate this release to the late Coosje Wijzenbeek.

This is a recording that we should all cherish for what it is: A guarantee that with such gifted players excellence and creativity can be safeguarded for many, many years to come. I do hope that this is not a one-off and that, with the end of Covid restriction hopefully near, The Vondel Strings and its spiritual Captain will continue to excel and enchant live audiences