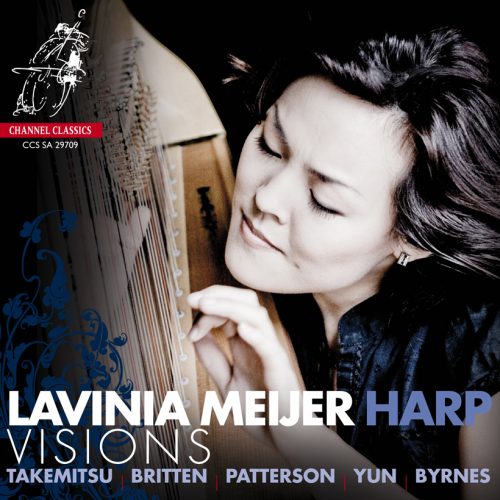 I am sometimes asked to name my favorite stylistic period. It doesn’t matter to me, as long as we’re talking about good compositions and I can give them my own personal interpretation.

It’s true that even as a young performer I discovered that I had an affinity for modern music. I am particularly interested by the technical and interpretative possibilities. It gives the performer a sense of freedom. I also enjoy the challenge of making modern music, which is experienced by so many people as “difficult”, into something not only approachable but exciting.

Personal contact with the composer is a priceless advantage here. I would never have been able to perform the works which were written especially for me by Garret Byrnes, Carlos Michans, and Jacob TV (Jacob ter Veldhuis) with such conviction if the composers hadn’t been around. Music for the harp has been composed in every imaginable style over the centuries, and in the process, certain structures and “rules” have come into being which were largely obeyed by every self-respecting composer.

But in the last century things changed. The limits were extended. A few composers, such as Carlos Salzedo, deliberately departed from the beaten path, even though it was sometimes a struggle before they could ultimately realise their personal visions. My experience has been similar. I have more or less demanded the right to experiment with new music in order to establish my own place on the concert platform.

one of the best of all harp recordings now available. (…) needle-sharp precision in realizing every moment in each of these pieces. Never popular generally, it receives an account of great refinement. (…)

This recital offers an inspired programme of 20th- and 21st-century pieces recorded in a gorgeous acoustic by Jared Sacks, one of the industry’s foremost producers and engineers. So, very high expectations, but does this disc deliver? Oh yes, yes and yes again.
Brittens’ Toccata (from Suite, op. 83) is a miraculous miniature, with some lovely arpeggios, the Nocturne a moody little number, distinctly Satie-esque in its unquiet ramblings. But it’s in the short Fugue that Meijer produces some of the most liquid tones imaginable, the closing Hymn a discreet set of variations on a Welsh tune. Rarely have I heard harp playing of such delicacy and poise, the crisp upper register counterbalanced by a dark, woody bass that beguiles the mind and caresses the ear. But make no mistake, this is muscular, trustful music, and Meijer delivers it with plenty of passion and power.

I was so taken with this disc that I promptly went out and bought Meijer’s earlier recording, Divertissements (CCS SA 28908). That, too, is a pleasure from start to finish, but really Visions is in another league entirely. Channel’s solid production values – reflected in the high standard of its artwork, liner-notes and general presentation – would be sorely missed if downloads and DIY documentation become the norm. A must-have for harp aficionados and audio buffs alike.

Meijer’s brilliance is undeniable throughout this quirky repertoire.
(…) Her brilliance as a harpist is amply demonstrates in all of the pieces making up this recital (…)
(…) Spectacular in glissandos and chordal effects in Britten’s Suite (…)

Without doubt, here is one of the most magnificent recordings devoted to the harp of the past ten years. This monument – for that is what it is – is dedicated to contemporary composers or those from the last century.
(…) Lavinia Meijer once again performs with communicative passion. Each instant of her brilliant playing, colorful and inspired from beginning to end, is absolute magic. Her fingers glide on the chords with both grace and virtuosity. Time then seems to stop its forward advance, leaving the silence of these poetic resonances melt into our most intimate thoughts. This, quite simply, is a masterpiece.