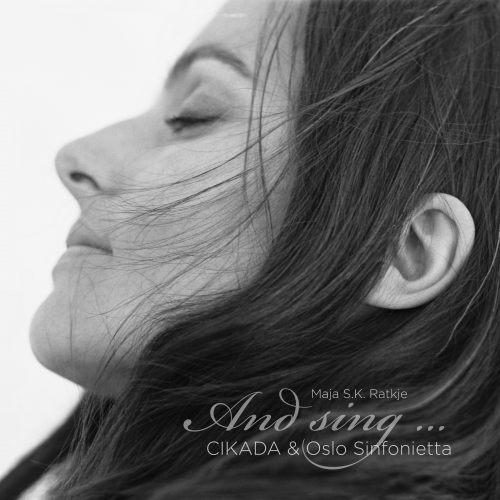 This album interleaves the composer’s own voice as a performer with the ensemble sound of Cikada and Oslo Sinfonietta.

In “And sing while thou on pressed flowers dost sleep” the voice is pre-recorded, and the sound files are played through loudspeakers placed among the musicians. In Concerto for Voice (moods IIIb) the composer is performing live a solo part for amplified voice, using much wider dynamics and improvisation.

While performing has influenced and inspired Maja S. K. Ratkje’s composing, the opposite is also true – even though it’s too simple to say that she improvises like a composer and composes like an improvising musician: “The process of composition is primarily about mastering form and contextualising elements – both the actual sounds and the formal units – musically,” she says.

I recently reviewed the last 2L Recordings release from Cikada, Carola Bauckholt’s Ich muss mit Dir reden (We Must Talk). “You can’t just listen casually,” I wrote. “You have to crawl inside these sounds and inhabit the same space.” I described this thrilling recording as something that “might sound like a recording of random sound effects” that will make you “occasionally leap out of your chair.” I also mentioned that repeated listening sessions reveal the structures underneath the sounds, and it all starts to make sense and even sound glorious in a sharp and bracing manner.

And Sing…takes this a step further. The Cikada Ensemble is still very present with its moments of startling and unearthly sounds via percussion as well as other traditional instruments played in unorthodox manners to create unusual timbres. There’s even a typewriter that’s featured somewhat prominently. The Oslo Sinfonietta expands this palette of sound into a much larger space with many more traditional instruments—woodwinds, brass, and strings. That makes the crescendos far more dynamic than with the Bauckholt album (which sounded like someone wandering in a dark, cluttered attic without a flashlight), something more in line with atonal 20th-century classical music.

But the element that pushes And Sing… into even darker corners is the focus on the human voice, which is delivered by Maja S. K. Ratkje herself. Her voice isn’t lovely or charming—it’s a pure expression of noise, albeit one with curious tethers to real human emotion.

Here’s where the spectacular 2L sound quality comes into play—on the first piece, “And sing while thou on pressed flower doth sleep,” Ratkje’s voice is pre-recorded and played through single speakers placed among the musicians. On the second piece, Concerto for Voice (moods IIIb), Ratkje improvises live with the other musicians, although her voice has been amplified. An uninformed yet attentive first listen may quickly reveal these two different deliveries of the human voice, but it’s even more fun to go in with a familiarity to these contrasts and see how these sounds interact differently on the stage in a spatial manner.

It’s very clear that Morten Lindberg of 2L Recordings is appealing to rarer intellects with some of these oddly inventive recordings he’s been putting out over the last several years. While the audience for these truly unusual musical sojourns is decidedly small, they do perform an important function other than chasing people out of trade show exhibit rooms when it’s closing time. 2L has been a pioneer when it comes to exploring digital formats and technologies. While I still listen to a majority of my 2L collection through a more traditional two-channel system, I’ve recently been able to take advantage of the multi-channel tracks and that’s when the brilliance of these strange sonic adventures starts to gel.

Oslo’s well-respected 10-member Cikada ensemble has been playing avant-garde music for more than a quarter of a century. On this album, the Cikadas collaborate with Norwegian composer/singer Maja S.K. Ratkje on the first of two extended works for voice and instrumentalists. Ms. Ratkje next joins forces with the Oslo Sinfonietta, Norway’s oldest contemporary music group, that shares its artistic director Christian Eggen with Cikada.

“And sing” takes its title from Titania’s response to Bottom in Act III of Shakespeare’s A Midsummer’s Night Dream although the connection with the iconic comedy is not obvious. It features sound clips of Ratjke’s recorded vocalizations interspersed with the sounds of the individual instruments and although the sounds frequently resemble electronic music, everything in this piece has an acoustic origin. The composer describes this work as follows: “the recorded voice sounds that are played back also serve as a score for all of the instrumental parts. This means that the work cannot be realized with a soloist singing live. It is the exact contents in every recorded sound that determine everything in the score. … The work’s long final session has also been constructed based on an idea which has impinged itself on my original compositional idea: one by one the musicians are replaced by a recording of me singing, peeping or whistling their part, while they instead switch to playing a pattern of short notes that we heard earlier.”

“The Concerto for Voice” has a live Ratkje and is cast in a more traditional soloist/ensemble form. Again, in the composer’s own words: “Thematically, the work begins with a progression of chords—these are so-called spectral chords derived from spectrum analysis of the tenor saxophone. …The harmonic side theme to the spectral chords is a three-tone-based motif taken from common frequencies in selected multiphonics—these, too, from the saxophone….the idea of using an old typewriter occurred to me, as a sort of sidekick to the solo voice.”

Both of these works share a very pronounced modernity that often substitutes interpolated and seemingly random sound effects for a continuous melodic line, particularly apparent in “And sing.” Ratjke’s voice is a spectacular instrument that generates a wide range of sounds in the manner of the old-style radio sound effects yet without reference to a traditional lyrical framework.

Did the election leave you on the edge, and wishing to scream? If so, and the need for catharsis remains, I have for you the scream to end all screams: And sing. . ., 2L’s multi-format recording of two works by the astounding composer/artist Maja Solveig Kjelstrup Ratkje. Showcasing Ratkje’s unforgettable vocal effects — to call them “haunting” is to vastly understate her ability to rattle you to the core — the recording includes accompaniment by the Oslo-based contemporary music ensemble, Cikada, and the 30-year old Oslo Sinfonietta.

Easy Listening? And sing. . . is not, but essential listening it is. For far too long we have allowed ourselves to wallow in music that portrays suffering and agony in the sweetest of terms. Many of us, in fact, intentionally invest in sweet-sounding, warm amplifiers and cabling in order to experience our world through the aural equivalent of rose-colored glasses. (I once sold an otherwise astounding Krell amplifier because it made everything, including Shostakovich’s music of suffering and rebellion, sound unnaturally sweet.) For those whose listening tastes range no farther that Nat King Cole and early Mozart, And sing. . . likely will not a good day make.

Ratkje strips away all semblance of sweetness. After listening to the entire, superbly recorded album late in the evening, I found it so disturbing that I spent a deeply fitful night imagining what it feels like to be tortured to death, or locked in a gas chamber and discovering gas coming through the supposed shower heads. I even had flashbacks of those horrible images of emaciated corpses being plowed into graves after the Allies liberated Nazi concentration camps, and found the bodies of the dead that war criminals and people who were “just obeying orders” had left to rot. Yet I still urge you to hear this recording. No one in recent memory, save for the amazing, still performing Diamanda Galas and some of the great heavy metal/punk exponents, has dared to enter the darkest fields of human existence and render from them music so equally compelling, fascinating and unflinchingly tortuous.

The first of the two compositions on the 46-minute recording, And sing while thou on pressed flowers dost sleep, was commissioned in 2012 by the Cikada Ensemble. Deriving its title from Shakespeare, it features untreated, pre-recorded vocal sounds that were inspired by electronic music. As Ratkje begins to scream like a siren, I imagined the advance of a threatening, lumbering beast or a monster rising from the midst. Slimy, ghostly organisms appeared before my eyes as Cikada’s sensationally recorded percussive effects left me equally amazed and repelled. As everything got going at once, to the point that I couldn’t easily tell which bizarre sounds were produced by voice, and which by instrument, I felt as though I was being whirled around in a particle accelerator and then hurled into the void. By the time the music faded out, I was beyond words.

Ratkje’s initially performed Concerto for Voice with the Norwegian Radio Orchestra in Paris before reworking it in the form heard here, as Concerto for Voice (moods IIIb) for sinfonietta-sized orchestra. The piece begins with a growing tumult, as slow rumbling paves the way for Ratkje sounding like chalk screeching on a blackboard (or worse). The dynamic swings are huge, as the music’s quasi-mystical sounds veer between agony and ecstasy. Screams and utter chaos ensue before the virtual cataclysm cedes to softer sounds.

As a vocal tour de force, you’ll have to go to recordings of Galas or Joan La Barbara performing Berio to find anything nearly as astounding. At times, Ratkje sounds as if in the death throe agony . . . until she begins whistling or making clicking sounds or snorting like an exotic bird or pet pig, and a typewriter begins clicking away in the distance. The instrumental forces are equally hell-bent for leather, leaving little standing in their wake.

The recording, which was made with the performing forces arranged in a circle around a special microphone array, may take you the closest you’ve ever been to the surround experience via two-channel. My just-installed Synergistic Research Tranquility Base UEFs, which sit under Pass Labs XA200.8 monoblocks, along with the company’s Grounding Block and other enhancements from Bybee, Stein, and Grand Prix, sure helped convey engineer Morten Lindberg’s astonishing three-dimensional layering and image weight. 2L’s engineering is perfect for what Ratkje does.

By the time the concerto ended quietly, I was in a state of disbelief. Thank God I had already walked the dogs, because I was in no shape to do so after listening. Unless the heaviest dose of reality you can possibly bear must come via Reader’s Digest or an Oprah special, do whatever you can to hear this recording on a good system. 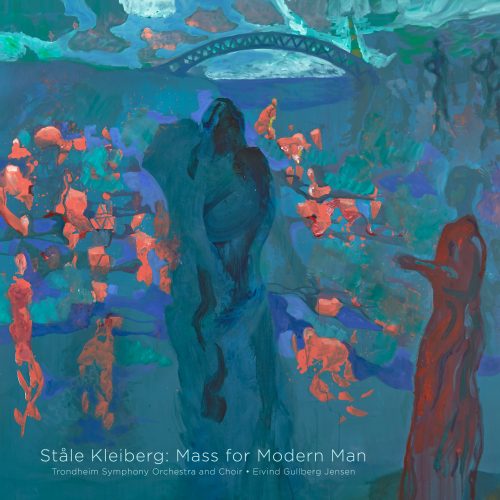