Empress of the Blues 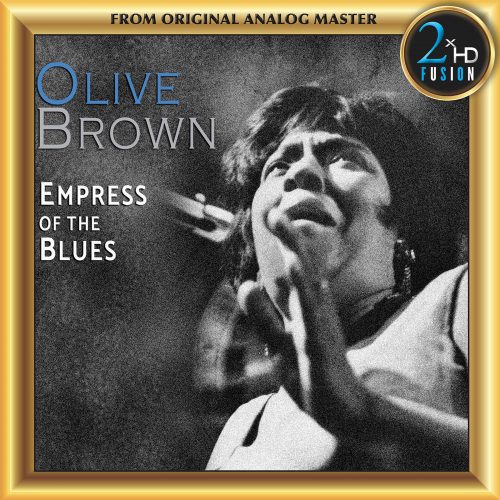 Empress of the Blues is a compilation drawn from the Original Analog Master Tapes of three albums by Blues Singer Olive Brown from the Jazzology Records catalog issued in the early 1970s. The albums include classic blues interpretations excitingly performed of “Empty Bed Blues”, “Aggravatin’ Papa”, “Back Water Blues”, “Gimme a Pigfoot and a Bottle of Beer”, and similarly earthy material.

The songs have been transferred from Analog to DXD and DSD by Rene Laflamme at 2xHD Mastering (DXD, DSD 256, DSD 128, DSD 64) and Tom Caulfield at NativeDSD Mastering Labs (DSD 512).

Olive Brown was a treasure in the world of blues. On “‘Deed I Do”, the band catches fire. Mike Montgomery dominates on piano, and there is evidence Brown felt most comfortable in a piano and voice pairing going back to her youthful singing in the sanctified church. Her voice and style have authenticity when applied to these songs and it’s nice to enjoy them.

Not having discovered Olive Brown until now is my loss. As is clear from a listen to this latest restoration project from the wonderful 2xHD label.

Drawing on three of Brown’s 1970s albums for the Jazzology label, this compilation has been put together by converting the original analog tapes via a custom-tubed Nagra and the label’s in-house-designed Analog to Digital Converter, and pretty special it sounds.

Yes, the tracks are period pieces.  But it’s clear that Brown, who died almost 40 years ago at just 60, both had serious pipes on her and could make even familiar music by the blues greats her own. She’s aided here by a band made up of old-school battle-hardened Jazzers. Listen to them delivering ‘How Come You Do Me Like You Do‘, and I defy you not to smile.

Empress of the Blues is a compilation drawn from albums issued in the early 1970s by St. Louis native Olive Brown, who made her mark as a blues and jazz singer in her hometown, as well as in Detroit and Chicago, and was particularly associated with the traditional jazz scenes in those locales. Brown, who passed away in 1982 at the age of 60, was sometimes referred to as the “New Empress of the Blues,” but this collection, despite its title, certainly proves that she had a much broader stylistic range than her affinity for channeling Bessie Smith.

The compilation features all ten tracks that make up Olive Brown and her Blues Chasers (1973) on which she is accompanied by a quintet featuring pianist Mike Montgomery, trumpeter and trombonist John Trudell, clarinetist/saxophonist Ted Buckner, bassist Bill Bolle, and renowned drummer J.C. Heard.

Four of the tracks are drawn from Smith’s songbook (Aggravatin’ Papa, Back Water Blues, Gimme a Pigfoot and a Bottle of Beer, and Empty Bed Blues), and Brown’s versions feature a strong, emotive bravura that conjures the classic blues diva but also exhibit a brighter sense of swing that emerged from subsequent generations of jazz/blues singers. And, those influences are given overt nods in other selections, including Sweet Man and Go Back Where You Stayed Last Night (Ethel Waters); Sugar (Waters and Billie Holiday); ‘Deed I Do (Holiday, Ella Fitzgerald, and Lena Horne); and That Old Feeling (Fitzgerald). The band locks in behind her and delivers tight, inventive solos. If anyone can add a swinging spark to an ensemble, it is Heard, an underrecognized jazz drum master.  Montgomery truly shines in a duet on Back Water Blues.

If the name Olive Brown doesn’t ring any bells you can forgive yourself. She wasn’t a Golden Age blues singer or even a chanteuse of the swing era. She was never the frontwoman for a legacy band hopping the globe in the 50s and 60s. Indeed, her career as “The New Empress of the Blues” spanned a mere decade, peaking in the early seventies when she was already in her 50s.

The tracks on this album include “Empty Bed Blues”, “Aggravatin’ Papa”, “Back Water Blues”, “Gimme a Pigfoot and A Bottle of Beer”, and similarly earthy material.  These are classic interpretations excitingly performed. Particularly on “‘Deed I Do”, the band catches fire. Mike Montgomery dominates on piano, and there is evidence Brown felt most comfortable in a piano and voice pairing going back to her youthful singing in the sanctified church. Her voice and style have authenticity when applied to these songs and it’s nice to enjoy them crisply recorded rather than on scratchy transfers from the early ’20s.

After her brief time in the spotlight, captured on these definitive recordings, she drifted back into obscurity dying at age 60 in 1982.