Love You Madly – Live at Bubba’s 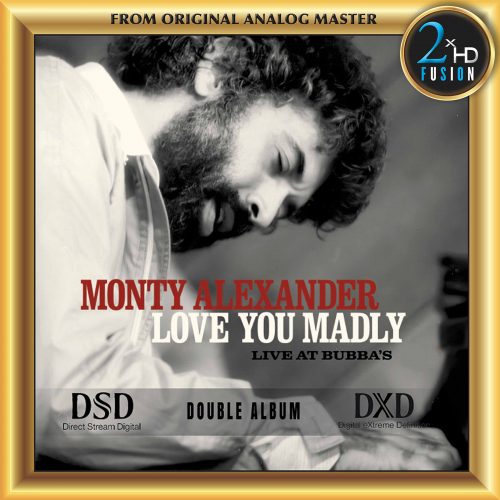 Drawn from Alexander’s personal collection, the vigorous, imaginative performances on Love You Madly were recorded at the titular Fort Lauderdale, Florida nightclub on August 6, 1982. The recording engineer was the late Mack Emerman, legendary founder of Miami’s Criteria Recording Studios, the state-of-the-art facility where the Bee Gees, Eric Clapton, the Allman Brothers Band, and Aretha Franklin, among many others, had cut some of their biggest hits.

The Kingston, Jamaica-born keyboardist had lived in Miami since his family moved there in 1961, and had known Emerman, a Jazz buff who had played trumpet in his alma mater Duke University’s big band, for many years.

Alexander recalls in a new interview with Resonance Records co-president and Jazz Detective Zev Feldman, “Mack just had this idea, ‘Hey, can I come and record you? I’ll bring the truck.’ He already had a remote truck [unit]. So, he brought the truck and he put the mic on the bass and the drums, and the whole thing, and, son of a gun, this tape, which he gave to me, was all a gift.”

In his overview essay, Jazz historian Willard Jenkins says of the resultant recording, “For this date at Bubba’s, Monty Alexander drew up neatly balanced set lists that touched upon several facets of his expansive bag, including standards, ballads, blues, island perspectives and southern exposures ranging as far south as Brazil. Love You Madly provides a wonderful survey of the leader’s gifts and his enormous rhythmic palette on the wings of his consummate piano artistry.”

Hearing this album, you’ll agree with pianist Christian Sands who says: “Listening to Monty is like eating a great meal made by a master chef. He musically cooks with the grits and gravy of the blues, adds the smokiness of NYC swing, all while simmering in the rich island flavors of his Jamaican roots. He satisfies all of the senses and leaves you wanting to hear more.”

The more of these albums the 2xHD label uncovers, remasters and releases, the more you appreciate the work it’s doing in letting us rediscover superb performances.

These live recordings, taken from pianist Monty Alexander’s own collection and made in August 1982 at a Florida ‘Jazz Restaurant’, were captured by engineer Mack Emerman, founder of Criteria Studios – home of many a big-selling recording.

You really don’t have to be a beard stroking Jazzer to enjoy this. An ear for a great recording of fine performances will do.

Audio items can surprise you. In the case of “Love You Madly”, the surprise is so positive that you just have to tell the world about it.

Once again someone found an analog tape in a drawer, a live recording that had never been published. In spite of this, it also completely satisfies today’s HiRes standards. And although the recording is from 1982, it is fresh and dynamic.

The pianist Monty Alexander has fascinated me – at least since a live experience at the Montreux Jazz Festival in January 1997. When I heard excerpts from the live performance at Bubba’s, I had to hear everything. Assuming that I would discuss the best of the best in terms of sound quality, I chose the 2xHD version in DSD 128 format, mastered by René Laflamme from NativeDSD Music.

And now suddenly a previously unpublished live recording appears, which reproduces Monty Alexander’s musicality and joy in improvisation, his fireworks-like outbursts, rhythmic gimmicks, but also his gentle empathy in full dynamics, as the album is not only sound technically flawless, but convincing.

From Burt Bacharach’s hit film “Arthur” (1981) to Milt Jackson’s blues “SKJ”: The 92 minutes of this performance are without exception breathtaking, evocative, tasteful, exciting. There are no “outliers” on the whole album that should have been left out. The alternating tempos and rhythms are perfectly balanced, as it should be in a concert. Probably because of the time limit, the applause was faded out after each piece. Announcements and comments have been left out so that we do not know whether the performance really happened as we are hearing it now. But that is a minor matter.

The three fellow musicians were unknown to me until then, but I learned that bassist Paul Berner only joined Monty’s quartet shortly before these recordings and was previously responsible for the bass foundation for Lionel Hampton. Duffy Jackson repeatedly played gigs with Monty Alexander and was one of the regular drummers of the trio or quartet from 1972 to 1992. Percussionist Robert Thomas Jr., who worked in groups such as Weather Report or The Zawinul Syndicate, was a long-time companion of Alexander whenever he needed a percussionist.

All three have their fair share of solos, but of course Monty’s keyboard acrobatics predominates.

Love You Madly by Monty Alexander and his men is such an extraordinary album that reflects the joy of playing, musicality, ability, but also the mutual engagement and takes you from A to Z.

Live at Bubba’s is an absolute recommendation!

South Florida jazz fans of a certain age have fond recollections of Bubba’s, a Fort Lauderdale nightspot that attracted jazz giants such as Ahmad Jamal, Sonny Stitt, and Carmen McRae. Pianist Monty Alexander, who had moved to Miami from his native Kingston, Jamaica, as a teenager, was already an international star when he played the room with his quartet in 1982. Fortunately, the performances were captured on tape by Criteria Studios founder Mac Emmerman, the music comprising the new double-album release Love You Madly: Live at Bubba’s (2xHD-Resonance).

Culled from Alexander’s own collection, the album reveals the pianist at the peak of his powers.  He delves into a wide-ranging set that dips into Jazz and Brazilian standards, Blues, and Reggae. Each expertly evinced by the pianist and his group.

Doubling down on rhythm, Alexander is supported by drummer Duffy Jackson and percussionist Bobby Thomas Jr. (of Weather Report fame) as well as superb bassist Paul Berner, who had played with Lionel Hampton. Alexander has long been among the most engaging of performers, honing his communicative skills with audiences at hotels, bars, and restaurants throughout South Florida.

That charm is evident from the jump, as the pianist kicks off the set with an instrumental read of “Arthur’s Theme,” the hit from the then-new movie. Alexander and his rhythm team start out with loungey, laid-back swing, before taking improvisational flight into the Caribbean and Latin America for a heart-racing finish.

1 review for Love You Madly – Live at Bubba’s