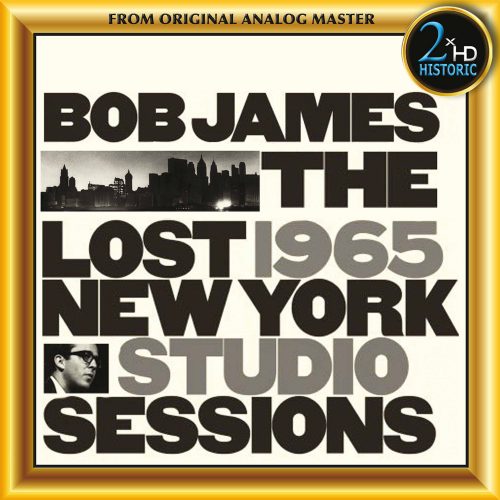 This recording is going to surprise – perhaps even shock – a great many people who think they already know the music of Bob James.

After all, isn’t Bob James the de facto godfather of smooth jazz? The multiple Grammy Award-winning pianist, composer and arranger who found fame and fortune in the 1970s and 1980s by crafting an audience-friendly fusion of light jazz, pop, sweetened funk, and smooth R&B? The founder of the best-selling crossover band Fourplay? The composer of the hit theme to the sitcom Taxi, whose ear-warm melody played on recorder and electric piano was all over the airwaves in 1979-80?

This arresting trio album is comprised of two previously unreleased studio dates that have now been brought to market by the Jazz reissue specialists at Resonance Records. It is Bob James at the age of 25 with one foot in the post-bop vanguard and one foot in the avant-garde. Are these tracks really by the same pianist who wrote the Taxi theme? You bet they are.

Most people have heard the music of Bob James. He wrote “Angela,” the theme song for the popular television comedy Taxi. The show ran from 1978 to 1983, and reruns are ongoing. The Bob James became one of the fathers and most successful purveyors of the smooth/fusion jazz sound, in recordings under his own name, with the group Foreplay and in teaming with saxophonist David Sanborn.

The Lost 1965 New York Studio Sessions takes us to Bob James back in the beginning, in a way we haven’t heard him, before he hit the groove which took him into a lucrative and still vibrant career.

The first impression: the music sounds so un-Bob James-y—no R & B funk moods, no lush and gorgeous backdrops, no high-polish production, no synthesizer sweetening. Instead, the two sessions are two-thirds straight ahead piano trio jazz—not too far from what pianist Bill Evans was doing at that time—mixed with some unexpectedly far out avant-garde.

The first session, laid down in January ’65, opens with Leroy Anderson’s “Serenata,” first recorded in 1949 by the Boston Pops Orchestra. James’ take features the bright, light-stepping melody in front of the bounce and shuffle of bassist Larry Rockwell and drummer Robert Pozar. “Variations,” another James-penned tune, begins in a stately manner that evolves—via the off-kilter instrumental machinations of drummer Posner and bassist Rockwell, along with some more indecipherable vocalizations—into straightforward weirdness, with the piano trying mightily to retain a mainstream mood.

The second session, from October 9, 1965, is straight through, straight ahead.  Sonny Rollins’ “Airegin,” the standard “Indian Summer,” and Miles Davis’ “Solar” all nicely rendered, with pizzazz.

The set, considered in its entirety, seems to say Bob James could have taken several different paths in his jazz journey: one on the sunny side of the street as a melodically bright, Ahmad Jamal-style piano trio guy, or taking a wild ride along a zig zagging road to a Stockhausen-esque avant-garde approach, instead of following his muse to wonderful success in the creation and the shaping the fusion/smooth jazz sound.

And, it should be mentioned, the guy who recorded these two sessions was George Klabin, founder, and co-president of Resonance Records, who was nineteen years old at the time, and continues to find great music from the past, from Eric Dolphy, Bill Evans, Wes Montgomery, Nat King Cole to Bob James and more.

The superb collection Bob James – The Lost 1965 New York Studio Sessions finds acclaimed pianist Bob James leading two separate trio dates during the early years of his career. Recorded by Resonance Records’ founder and co-president George Klabin while a freshman at Columbia University, the recordings capture James during a period in which he was working as a sideman with singer Sarag Vaughan and before he had established himself as a titan of crossover jazz, funk, and pop. The album is an almost perfect balance between the hard-swinging sophistication of his debut and the more avant-garde experimentalism of his follow-up.

The first session here, recorded in January of 1965, finds James backed by a fellow Vaughan bandmate, bassist Larry Rockwell, as well as drummer Robert Pozar, whom James had known since his days at the University of Michigan. Following the dusky, minor-tinged “Serenata,” James moves to the boundary-pushing “Variations,” a spare, classical ballad punctuated by eerie spinning metal plate noises, percussive bass knocks, and James’ own crystalline piano accents.

The second session, recorded in October of 1965, is more straight-ahead with James backed by Detroit-born bassist Bill Wood and drummer Omar Clay (also a member of Vaughan’s band).  Together, they play in an adroit, hard bop style, digging into several standards, including a nuanced version of Miles Davis’ “Solar” and a speedy reading of Sonny Rollins’ “Airegin.” We also get a gorgeous rendition of the classic Victor Hubert ballad “Indian Summer.”

While James would go on to achieve his biggest successes in the crossover jazz field, The Lost 1965 New York Studio Sessions further underlines just how willing he was to both play by and significantly bend the rules of jazz early in his career.

Before he became one of the biggest stars of smooth jazz, pianist Bob James was finding his voice. His first two albums might stun many of his present-day fans. His debut, 1963’s Bold Conceptions, is daring bebop with free-jazz fringes, and 1965’s Explosions is an avant-garde adventure, one of the first jazz records to incorporate electronics. Now, 55 years after its parts were recorded, comes The Lost 1965 New York Studio Sessions, and it continues the explorations James undertook before he went mainstream.

The second trio, with bassist Bill Wood and drummer Omar Clay, takes a more traditional approach, the kind that James would employ again 30 years later with his superb trio album Straight Up. Two standards — Sonny Rollins’ “Airegin” and Miles Davis’ “Solar”— get straightforward hard-bop treatments, and the old big-band ballad “Indian Summer” acquires a makeover as a quiet trio piece. The nine-minute “Long Forgotten Blues” lets each musician put his own imprint on an uncredited blues. Notable is that this ambitious, talented, and very young pianist resists any urge to throw a lot of notes at the wall. The Lost 1965 New York Studio Sessions unearths a missing piece of a major star’s development.