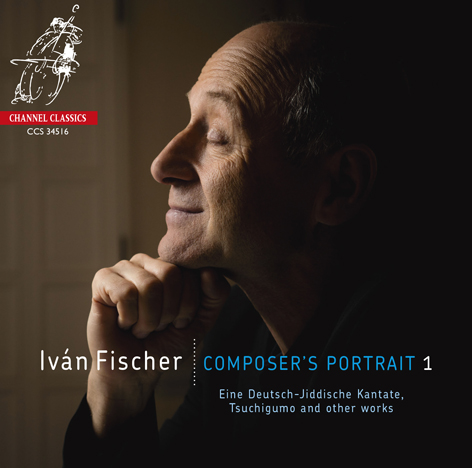 Iván Fischer, known worldwide as a conductor, has recently come to the fore as a composer. Fischer began composing at the age of twenty, writing, as he says, in an avant-garde style fitting for that age. But it all came to an end as he became more and more absorbed by conducting. Some thirty years later, however, the urge to take up the pen again became irresistible: “A feeling as though I found my true self.” He describes himself not as a composer but as a composing conductor, and the many composers whose music he conducts are his teachers and his sources of inspiration.
This CD presents a portrait of the composer Iv.n Fischer. The following liner notes are based largely on his own commentary and on that of Habakuk Traber (who writes for the Deutsches Sinfonie Orchester Berlin).

Notes about the number of tracks:
I have taken the liberty to make the last piece of work ‘Tsuchigumo’ as one track (in the booklet 16 – 25) as many sections play through to the next without stopping.

(…) a fascinating CD (…) Whether it’s a touching solo song in Yiddish (amazingly sung by Fischer’s daughter, the contemporary-specialist soprano Nora Fischer), a short Sextet for strings and tabla subtitled ‘Wanderlust’, the anguished German-Yiddish Cantata or the short opera Tsuchigumo, a completely off-the-wall creation in six languages and plenty of pastiche, based on a 15th-century Noh play – that voice is Essence of Fischer. It’s spare, direct, condensed. It’s funny, agonising, personal, satirical, sometimes switching between these in a flash, sometimes all at one go. It’s malleable, adaptable, insightful. A spot of Italian baroque style and language rubs shoulders with circus-like effects full of Hungarian black humour. And the opening fanfare is all fun – catchy and melodic and showy. Behind such chameleon-like eclecticism, though, lies a consistent personality: that voice, at one with the performer and the man.

(…) Anyone familiar with his [Fischer’s] sometimes eccentric, brilliantly precise work on the podium won’t be surprised to find similar qualities in his compositions. (…)

In music that is concentrated, lyrical, acerbic and often dazzling, Fischer brings together eclectic influences from Bach to weill, from Yiddish traditions to the Indian tabla and Japanese Noh theatre. (…) Soprano Nora Fischer proves a revelation (…)