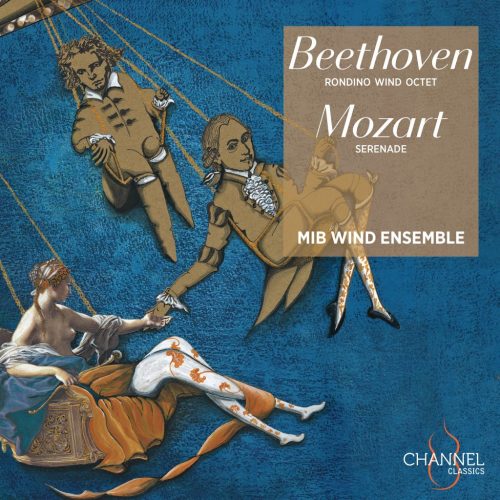 This is the first recording on Channel Classics with the Italian based MIB Wind Ensemble. Comprising the best players from the top orchestras of Italy, these musicians felt the need to create their own ensemble to fill the gap in repertoire and concert possibilities for wind instruments.

The two major early composers having written for winds would indeed be Mozart and Beethoven. So, there are no better fitting pieces than the two octets combined with the Rondino of Beethoven. Though considered ‘Tafelmusik’ – music for special occasions, “street music“, the Mozart Serenade first movement is anything but street music. No friendly and polite little piece of entertainment, but serious, sometimes threatening eight-part wind music full of chromaticism, dramatic leaps and definitely unfestive dissonances. The Octet of Beethoven also has the classical four movement structure, but he wrote the piece as an official concert piece.

And when it’s done, the pleasure is yours

The joyous mood of Beethoven’s Octet Op 103 is nicely captured here, the MIB players as ever delicious in their phrasing and collective observation of dynamics. Rhythmic bounce, eloquence of melodic line, delight in Beethoven’s witty exchanges and refinement of texture are all here in abundance, and I can’t imagine anyone having any complaints about such a performance.

So, the music… Hmmm… Well, it is Mozart. It is Beethoven. It is being performed by uber-talented wind players from several top orchestras. And I like it!

I like that both main works are complex—no fluffy stuff going on in either piece. I like that Mozart challenges one to think about what he is doing with the music. He flips it around, he turns it inside out, he uses dissonance and chromaticism. The music has tension. (What? Mozart? Oh, yes.) And, I like that Beethoven demands of the performers supreme effort, despite composing the work when only in his twenties. And, further, I like that the performers chose to include the Rondino in E-flat Major as the bridging track between the two major works. The Rondino was originally Beethoven’s intended finale of the Octet. Even though Beethoven abandoned it and wrote a new finale, I appreciate the original is included here as a standalone piece.

What is the secret? Find some good players, select music that is not yet (Mozart) or hardly (Beethoven) available in high definition, written by famously appreciated composers, and recorded by Jared Sacks. That’s all. And when it’s done, the pleasure is entirely yours.

I do not know what MIB stands for. But what I do know is that these are all seasoned soloists. Mostly hand-picked Italian musicians playing or having played in prestigious orchestras. Brief bios are given, but listeners may want to find out more on the internet. I for one have hugely enjoyed all of it, and I wasn’t sitting at my kitchen dining table. This is best listened to in the intimacy of your preferred listening room.