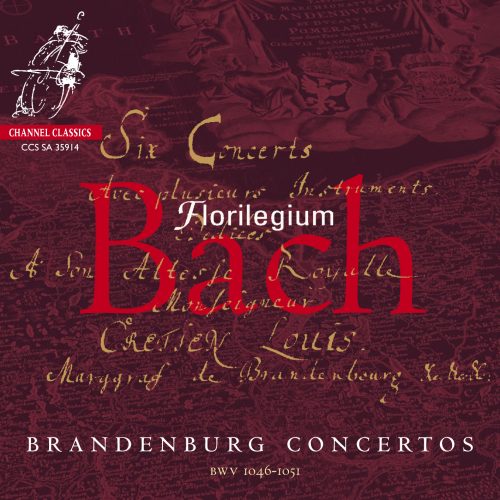 In a strange twist of fate, the Brandenburg Concertos have come to be named after a man who didn’t especially want them, never heard them, and may not have liked them had he done so.

Johann Sebastian Bach met Christian Ludwig, Margrave of Brandenburg in 1719 during his tenure as music director at the court of Leopold of Anhalt-Cöthen, who was the young prince responsible for signing up some of the musicians who were previously employed by Frederick William I. Bach worked at Anhalt-Cöthen from 1717 to 1723, and he and Leopold developed an excellent working relationship there. The Prince enjoyed travel, fine art, and, above all, music, and he respected and encouraged Bach in his work, even occasionally participating in the court concerts as a violinist, viola da gambist, or harpsichordist. Provided by Leopold with an excellent set of instruments and a group of fine players (and the second-highest salary of any of his court employees), Bach enjoyed a fruitful period at Cöthen. Many of his greatest works for keyboard, chamber ensembles, and orchestra date from those years.

Early in 1719, Leopold sent Bach to Berlin to finalize arrangements for the purchase of a new harpsichord, a large two-manual model made by Michael Mietke who was the instrument builder to the royal court. While in Berlin Bach played for Christian Ludwig, who was so taken with his music that he asked him to send some of his compositions for his library. Bach lost an infant son a few months later however, in 1720 his wife Maria Barbara died, and he rejected an offer to become organist at the Jacobkirche in Hamburg, so it was more than two years before he fulfilled Brandenburg’s request. By 1721, however, Leopold had become engaged to marry a woman who was horrified by the amount of money channeled to musical entertainment at the court. Bach seems to have realized that when she moved in, he would probably be moved out, so he began looking for a more secure position. He remembered the interest the Margrave Brandenburg had shown in his music and thought it a good time to approach him again. He, therefore, picked six of the finest concertos he had written, copied them out meticulously, had them bound into a sumptuous volume (at considerable cost), and sent them to Christian Ludwig.

This performance by Florilegium is a rarity in the overwhelming proliferation of accomplished recordings of these masterworks. Not only is it full of all the joy that Bach was capable of writing, but it displays all the detailed, sensitive interpretative consideration and technical perfection that can forge a lifelong relationship with a single recording.

I can’t stop playing the last movement of this recording. (…) what a fine Mahlerian he is: this account is superb for the orchestra’s deep, old-world sound, for a generosity of expression that clinches the work’s turmoil but draws radiantly life-affirming conclusions. (…)

(…) another outstanding set of period-instrument Brandenburgs from a crack British group. (…) One revelation is the chamber-scale Sixth Concerto which can too often sound mushy and ill-defined. Not here; you’ll never hear the individual lines so clearly delineated, and the first movement moves at an ideal pace; bouncy, alert, but never forced. (…) A winner (…) a first choice in this repertoire. Beautifully recorded too.

“A substantial achievement that should find many admirers.”

“This is one of the few [Brandenburgs] that I have truly enjoyed—and they take up two feet of my shelf space… this new recording by Florilegium is just that much closer to the ‘very peak of that mythical Brandenburgian Everest’.”

On period instruments, this new one by Florilegium on Channel Classics hybrid multichannel SACD goes at the top of the list. This set contains fleet performances that are at the same time scholarly informed and passionately performed. (…) All of the Florilegium readings are breezy and bright – happy Bach, if you will. (…) Not only are these the best period instrument performances, they are recorded in the best sound of any set. The CD layer is excellent, but the SACD is a marvel (…) the front channels are transparent and crystal clear. Warmth and clarity combined – a winner.

(…) thanks to Ashley Solomon’s beautifully judged tempi in each of the six concerti and Channel’s breathtakingly vivid 5.0 DSD recording there is a glow, richness and body to the sound that would be the envy of many orchestras. (…) excellent booklet notes (…) there is a natural unforced quality to the music making throughout this set (…) the performances of all twenty one musicians heard here deserve the utmost praise (…) the recording quality is beyond reproach (…) this new release should be at the top of anyone’s shopping list.

Each new release from Ashley Solomon’s versatile period instrument group Florilegium is always an exciting prospect.(…) thanks to Ashley Solomon’s beautifully judged tempi in each of the six concerti and Channel’s breathtakingly vivid 5.0 DSD recording made in the Church of St John the Evangelist, Upper Norwood, London in November last year there is a glow, richness and body to the sound that would be the envy of many orchestras. (…) excellent booklet notes (…) The recording quality, as I have already indicated, is beyond reproach. Solo instruments are beautifully balanced with a wonderful sense of air around them and their spatial positioning within the sound picture is always perfectly defined.

The insatiable public demand for new recordings of the Brandenburg Concertos apparently seems unstoppable, but, in spite of fierce competition, this new release from Florilegium should be at the top of anyone’s shopping list.

(…) This is consummate music-making that reflects the players’ evident joy with this repertoire. And by adjusting the order and instrumentation, Florilegium has given us a particularly fresh and vibrant sounding reading.