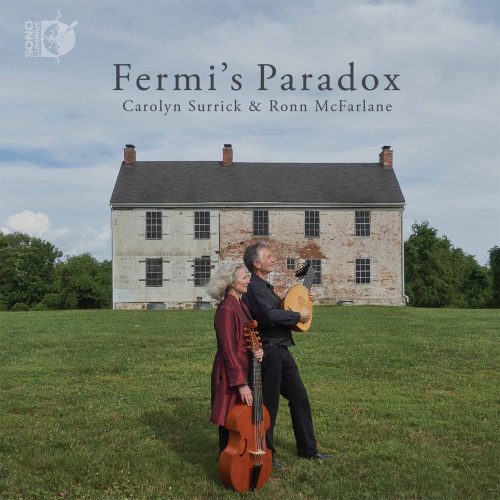 Grammy Nominated lutist Ronn McFarlane returns to NativeDSD with Fermi’s Paradix, his third release on the Sono Luminus label. The album is a new Stereo DSD and DXD album to follow his earlier album The Celtic Lute and the album Barley Moon with the ensemble Ayreheart (both also available at the Native DSD Music Store).  This time he performs with Carolyn Surrick playing the Viola da Gamba and guest percussionist Jackie Moran playing the Bodhran on tracks 2, 5, and 8.

The album is Surrick and McFarlane’s first together. It was created and recorded during the Covid-19 pandemic. Surrick is well-known for her many recordings with the group she founded in 1998, Ensemble Galilei. McFarlane is the founder of Ayreheart and a founding member of the Baltimore Consort. Their album includes recordings of new music for lute and viola da gamba as well as arrangements of some of their favorite tunes.

McFarlane told us: “We had all the time in the world. We had three months. Our Saturday rehearsals turned into Saturdays and Sundays. Week after week we scoured our memories, stacks of books, piles of sheet music, and beloved recordings for pieces we might include on this album.

Ronn brought tunes that have been part of his life since he was a young man – music he loves and had arranged for the lute. He arranged them again for the lute and viola da gamba. He asked, “Do you know Little Martha? It was originally recorded by the Allman Brothers.” I did not. Blackwater Side is a traditional Irish tune arranged by Bert Jansch. John Barleycorn fit perfectly with She Moved Through the Fair, an Irish tune I had never heard. It was a new song to be sung by my instrument. We both love Turlough O’Carolan and neither of us had ever recorded Planxty O’Rourke, Second Air with its mysterious blend of Irish and Italian sensibilities (tunefulness and raw emotion) so that made the short list. The Rose of Raby had been on my mind for years. This was the time and place.

It seemed ridiculous to even consider a recording for lute and gamba without something by John Dowland. It turned out just one of his compositions was for the two instruments – so we recorded it. If there’s Dowland, then there must be Marin Marais, one of the greatest composers for the viol who ever lived. If the gamba is going to sing a traditional Irish tune, why not a recitative and aria by Telemann? If she’s going to sing something by Telemann, why not an Ave Maria, written by Gounod and based on thematic material belonging to Bach?

As the pandemic increased in its fierce destruction, I sat alone, practicing. Some of us play from memory, some with the music in front of us. One night I began Amazing Grace. I had always played it in G major – there are lots of double stops easily available (playing more than one string at a time) and the instrument is super resonant in that key, but this time I tried C major. There was a kind of openness and freedom that had been hidden from me. I’ve played that piece for decades, but I had never heard it like that before. I sent a recording to Lindsey. I called Ronn. We had to include it.

I worked on the Bach harmonization of O Sacred Head using all the resources of the instrument – and then we added the lute. We paired another hymn, Come Thou Fount with the Swedish tune Sjungar-Lars Visa and fell in love with the two together.

Ronn and I both compose, usually inspired by people or places. His Trinity Grove and Daniel’s Chaconne are both tributes to dear friends. For me, The Last Day speaks of the weight of deep losses. And then, there’s Fermi’s Paradox. I love this story.

The brilliant Italian physicist Enrico Fermi was walking with friends at work one morning and said something like this, “It is mathematically impossible to imagine that there is not intelligent life out there in the universe.” When they were sitting in the cafeteria later that day, out of the blue, he said, “So, where are they?” All of his friends knew exactly what he was talking about.”

To paraphrase the inspiration behind this album, given that it’s mathematically impossible there isn’t intelligent life elsewhere in the universe, then where is it?

That thought forms the basis of the title track here, which sets the gentle tone for the full set, bringing together lutist McFarlane and viola da gamba player Surrick, occasionally joined by Jackie Moran on bodhran.

A lockdown project, developed over several months. It combines original tunes with arrangements as diverse as Dowland and traditional Irish.

Recorded straight to DXD in Boyce, Virginia, it’s not going to set your system alight with its easygoing mood, but still sounds gorgeous. With both the main instruments captured persuasively, and no shortage of love and artistry in the playing.

If you need a chill-out, then search no further.

Tragedies yield opportunities, and that’s exactly what Ronn McFarlane and Carolyn Surrick accomplish. Gone are venues, as such, but in its place, a luxurious presence of re-engagement and re-creation. Were it not for the Pandemic, these friends wouldn’t have uncovered hidden jewels of the past as well as penning their own creations…together. What becomes most fascinating on the album are the new compositions and the threading of two or three songs into one.

Carolyn Surrick’s viola da gamba has a rarity in its ability to provide shadings of emotions that add great chemistry. For instance, Telemann’s Cantabile is deep in its flush with an outpouring of Burgundian blush. She also stakes claim during Gounod’s Ave Maria as the lute takes the harmonic backdrop. The rendition is searing but not over reacted.

Equally, Ronn McFarlane’s investments are worthy and in their own right. While his Fermi’s Paradox cleanly ponders the crux of the current state-of-affairs, his Trinity Grove is also a momentous experience in a different dimension: the piece is patiently pondering. Here, we dwell upon the ancient Redwood trees and a soft walk under grand canopies and damp earth. The pine needles on the floor, however, appear rejuvenated as Jackie Moran’s percolations awaken the giants. The Grove must, however, return their slumber in the closing arguments. Balancing his own compositions, M. McFarlane’s Daniel’s Chaconne gives the album a more amiable, softer edge.

In a paraphrase of old songs, the bountiful rendition of Come Thou Fount/Sjungar-Lars Visa cleverly weaves together religion along with folk melody, allowing each instrument a say in the music. The combination of She Moved Through the Fair and the classic, John Barleycorn, gets a stronger awakening by adding the percussive strength by M. Moran on the bodhrán. For a quick reflection, even Howard Duane Allman “Skydog” returns in a refreshingly gorgeous rendition of Little Martha. Un grand hommage.

Ronn McFarlane’s friend is the lute, and Carolyn Surrick’s viola da gamba her cherished soul. Integrating these two enduring instruments is significant and meaningful with an enlightenment to last a lifetime.

…Enrico Fermi’s dilemma has been rectified. 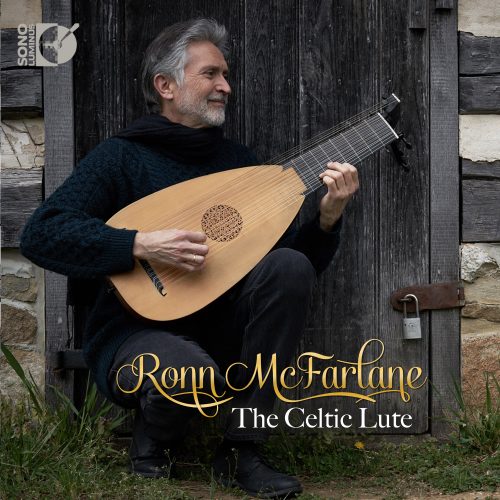