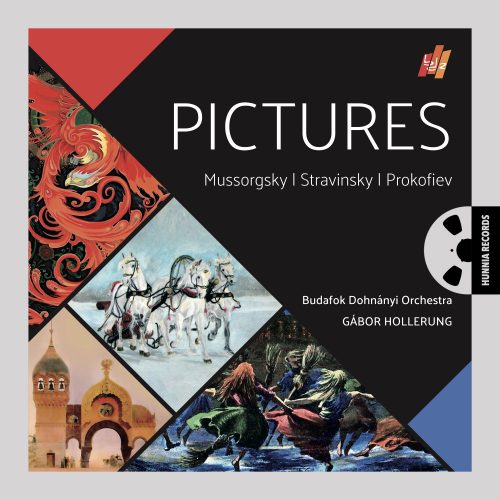 Conductor Gabor Hollerung tells us “The pictorial power of music has had an important effect in classical compositions from the Renaissance period, and it gained increasing importance in profane and dramatic musical genres like opera and oratorio. One of its best-known examples is Vivaldi’s Four Seasons, which evokes a series of images in the listener even without the actual knowledge of the sonnets the music was inspired by.

In absolute music genres (symphonies, concertos, pieces for chamber music etc.), the musical process is expressed exclusively by basic musical means, like change in tonality, the alternation of tension and solution. It could only preserve its absolute musical purity until the appearance of the symphonic poem on the stage of Romanticism, which put pictorial thinking in the foreground of its verbalizable ideas.

Mussorgsky’s Pictures at the Exhibition obviously need little explanation. The composer’s characterizing skills are unrivalled in colorfulness and expressive power, compared to his predecessors in French and German Romanticism. This composition highlights the most important purpose and mechanism of pictorial thinking i.e.: it is a mirror of the emotions generated in the listener by music. Being an ingenious master of stage genres, he creates an imaginary stage with great mastery that is the stage of the exhibition visitors’ soul and of his own at the same time. The thoughts, images, reactions born in the visitors’ mind are embodied by transformations of the famous promenade theme. The striking symphonic features of the piece originally composed for piano inspired many to write an orchestral arrangement even before and after Ravel. Ravel’s instrumentation is considered undoubtedly the best of all because there is not any self-aimed moment in it, everything serves the pictorial musical thinking in his arrangement.

Mussorgsky’s other famous masterpiece: Night on the Bare Mountain is also regarded as a kind of milestone. On the one hand, it is the most significant example of Romantic pictorial music, on the other it forecasts the birth of a brand-new musical genre: film music.

This composition was inspired by Gogol’s drama St John’s Night. In Mussorgsky’s work, the festivity of light is interwoven with the chasing of evil and darkness. Thus, St John’s night is connected to a witches’ sabbath scene – that is quite unusual for us. The menacing sound from under the ground gives us goose bumps, the dance of the dead is folkish and electrifying, the appearance of the Devil is solemn and bloodcurdling, the black mass celebrated by Satan is interrupted by the sound of bells heralding the break of dawn.

Mussorgsky writes this to his friend about the piece:
“Witches used to gather on this mountain, talk scandal, and wait for their chief Satan. After his arrival, the witches form a circle around the throne on which the chief, in the form of a giant goat, has seated himself, and they glorify him. When Satan has reached enough of a rage thanks to the witches’ glorification, he gives the sign for the sabbath to begin and then picks himself out the witches who have taken his fancy. That’s the way I did it. The form and character of my composition are Russian and original. Its tone is ardent and chaotic. I wrote St. John’s Night very quickly, directly into the full score, without rough drafts, finishing it in twelve days, thank God. Something was seething within me, and I simply didn’t know what was happening to me.”

Stravinsky’s Firebird – despite all its modernity – may be regarded as the peak of Russian late Romanticism. The composition points to a revolutionary new direction in the genre of ballet music. Obviously, the modern ballet trend related to the name of Sergei Pavlovich Diaghilev played a seminal role in that. As opposed to classical ballet with its highly refined, abstract code system, in this new ballet trend music and movement are connected elementally. Modern dance sees the rebirth of the primaeval and restores the genuine and natural relationship of movement and body.

Stravinsky brilliantly depicts the various layers and the emotional content of the story from mystical sorcery, through the gentleness of femininity to infernal vice. At the end of the piece, the glorified apotheoses of the Firebird theme is achieved through such unexpectedly simple and natural means that humbles the entire Romantic era. The 1919 suite version of the ballet was intended for the concert podium, and it presents us with the totality of magical images and emotions without knowing the entire story in detail.

The selection of pictures in this album is completed with three movements from Prokofiev’s suite from his music composed to the feature film Lieutenant Kijé. The movie itself is of minor importance in film history, the music composed to it however is an emblematic example of modern film music, besides his other work Alexander Nevsky. Prokofiev like -many film music composers today – arranged the material into concert suite with a very fine taste. This suite, like the other three compositions on this album, offers us a chain of strongly characterizing, pictorial movements. Prokofiev is regarded at the most significant composer of Neo-Classicism. In this work, his connection to Romantic musical thinking is obvious. The same characteristic theme – referring to the figure of Lieutenant Kijé – appears in every movement, yet it creates a different atmosphere in each situation. The composition has a certain grotesque touch, which is clearly related to the story where the non-existent character of Lieutenant Kijé is first cherished then abandoned by the machine of bureaucracy.”