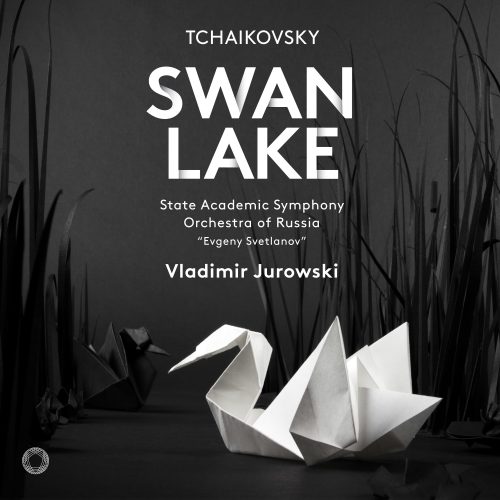 Swan Lake is the first of the three great ballets that Tchaikovsky wrote, and the most famous. The piece is known in the shape it obtained in 1895, when it became a classic in the choreography of Marius Petipa and Lev Ivanov. That “imperial” version strayed from Tchaikovsky’s world premiere score, with several cuts, abridgements, and displacements. This DSD recording presents the work as it was heard during the 1877 world premiere performance, highlighting the extraordinary symphonic qualities of Tchaikovsky’s original conception.

“To me, it is one of Tchaikovsky’s greatest achievements that he brought this symphonic dimension to the ballet, without compromising the lightness of texture and the greatness of the melodic invention. It is still great ballet music, but also a great symphonic score, and I hope this recording will fully lift out this symphonic quality of the music.” – Vladimir Jurowski

Swan Lake is performed by the State Academic Symphony Orchestra of Russia “Evgeny Svetlanov” led by its Artistic Director Vladimir Jurowski. Jurowski has recorded extensively for Pentatone and has received enthusiastic critical acclaim.

Planet Hugill 5 out of 5

Tchaikovsky’s original symphonic version of the iconic ballet restored to the repertoire.

On this album from Pentatone, Vladimir Jurowski and the State Academic Symphony Orchestra of Russia “Evgeny Svetlanov” give us the Swan Lake ballet that Tchaikovsky wrote in 1877, rather than the one arranged and re-adjusted after the composer’s death for Petipa’s famous version of the ballet in 1895.

In the 1980s, I attended a performance of Swan Lake at the Royal Ballet. For the first three acts, it was a traditional Petipa-based production but in the last act things changed as the music reverted to Tchaikovsky’s original and the choreography was by Frederick Ashton. I am not sure if this version has been revived since, but certainly we get few chances to experience Tchaikovsky’s original thoughts in the ballet.

Whilst Swan Lake might be one of the most iconic, and most revived, ballets in the Western Classical canon, it is strange that whatever the choreography, whether it is a reconstruction of Petipa and Ivanov’s 1895 original, ‘after Petipa’ or anything up to Matthew Bourne’s superb re-working, the music always stays the same (give or take a few cuts). And all based on a version created after the composer’s death and which he never sanctioned.

The history is quite simple, in 1895 Marius Petipa and Lev Ivanov created a new version of Swan Lake using music Tchaikovsky had written in 1877 for another ballet company for a production which was not very successful.

Petipa always had very precise requirements when it came to music and timings; he had worked with Tchaikovsky before on Sleeping Beauty, but the tragedy of Swan Lake is that this version was created after Tchaikovsky’s death, so other hands altered and edited the music, including orchestrating other Tchaikovsky pieces to fill in ‘gaps’. Some of the changes are striking and work well in the context of the ballet but they are not what Tchaikovsky intended. Where music has been moved from elsewhere in the score, the cracks are easily paper-over-able. But where ‘new’ Tchaikovsky music has been added, then the atmosphere changes and tension is released as we drop out of Tchaikovsky’s tightly wrought Swan Lake musical universe.

Whilst Tchaikovsky’s original Swan Lake has been recorded (in Soviet-era Russian recordings), it has been remarkably neglected, a fascinating lacunae in our passion of historical performance and original versions. When he wrote Swan Lake in the 1870s, he was under far less supervision from the choreographer than he would be when writing Sleeping Beauty for Petipa. So, the 1877 Swan Lake is very much Tchaikovsky’s own thoughts. In fact, many critics of the original 1877 Moscow production found the score too noisy, too Wagnerian (!) and too symphonic.

Whilst not a symphony in disguise, there is no doubt that Jurowski brings out the symphonic aspects of Tchaikovsky’s writing. The sections hang together in a way familiar from his symphonies (and conversely some of the early symphonies can sound remarkably like ballet music). Jurowski also has a profound sense of narrative, not surprising in a conductor who does both symphonic and operatic repertoire. So this works as an audio piece, without the dance.

What is fascinating/disturbing/intriguing are the moments where familiar music collapses into something entirely new, unfamiliar from the popular version. So that if you are familiar with the ballet, the scenario suddenly goes somewhere new.

The video (below) features an animation with origami birds, and the CD box set comes complete with instructions for making your own origami swan!

Jurowski and the orchestra performed the ballet in concert in February 2017, with the recording made that month and a year later. Sound and performance are admirable, and this is certainly a version of the music which I would love to live with. The booklet includes an introduction from Jurowski, along with an extensive article on the music and the development of the ballet.

Now all we need is for the Royal Ballet to revive Ashton’s version of Swan Lake and ask Jurowski to conduct it!

Pentatone bills this as the 1877 “World Premiere” version of Swan Lake, which it is. But for the sake of someone who might be misled by the “World Premiere” tag here, let me point out this is hardly the first recording of the original. In fact, the 1877 version is the most recorded one, though the 1895 rendition is usually chosen for the stage.

The earlier version is clearly the stronger of the two, at least from a musical standpoint, though balletomanes would prefer the later account. Arguably, what Jurowski conducts here is what Tchaikovsky would prefer (were he alive), since he died before the emendations were made to fashion the later version.

For this recording Pentatone turns to one of its stars, Vladimir Jurowski, who is principal conductor of the London Philharmonic Orchestra through the 2020-2021 season and principal conductor of the ensemble on this album, the State Academic Orchestra of Russia “Evgeny Svetlanov”. He is also chief conductor of the Berlin Radio Symphony Orchestra and will become general music director of the Bavarian State Opera beginning with the 2021-2022 season. Though he has conducted a wide variety of music over the years, both in the concert hall and on the operatic stage, he is most linked to Russian music, Tchaikovsky’s in particular. He has done a complete cycle of the composer’s symphonies with the LPO and is currently involved in a complete set of Prokofiev’s symphonies with this same Russian orchestra. He has made numerous other recordings, and needless to say, is quite a busy fellow.

Earlier in his career, Jurowski struck me as a conductor who was insightful and quite dependable, but also sometimes willing to take chances and go his own way. Here, he delivers a well-shaped, well executed account of this popular ballet music. Rarely does he do anything that listeners might regard as wayward. His tempos throughout are slightly on the brisk side, and his phrasing always accommodates Tchaikovsky’s wide-ranging expressive palette, from the exoticism of the Danse espagnole from Act III (Track 18, Album 2), to the spirited elegance of the Act I Waltz (Track 3, Album 1) and the intimate moments, like Act I’s Finale (Track 18, Album 1).

True, Jurowski’s tempo in the coda of the Act I Pas de deux (Track 14, Album 1) may be too fast for most dancers, but he still manages to make it work nicely here. While Swan Lake is extremely popular, it is a work in which Tchaikovsky gives you a large portion of dessert and relatively little meat and potatoes. Yet, in Jurowski’s hands the music has greater consequence, a more dramatic character. Indeed, he makes a strong case even for Act III, probably the lightest and least impactful of the four acts.

Jurowski’s cumbersomely named orchestra is the modern version of the USSR State Symphony Orchestra. An ensemble which oldtimers like me will remember from their many recordings from the 1960s on the Melodiya/EMI or Melodiya/Angel labels. They perform much better now, especially in their brass playing, and appear to be at or very near world class status. They have Tchaikovsky in their blood in virtually every number. Pentatone’s sound reproduction is vivid and well balanced.

One can certainly find several fine competing versions of this ballet. But Jurowski delivers a spirited and thoroughly idiomatic account in this new Pentatone recording that captures the essence of Tchaikovsky’s delightful score.

It wasn’t until the 1970s that there was a resurgence of interest in the original version of Swan Lake. As opposed to the hugely popular yet utterly inauthentic 1895 edition prepared two years after Tchaikovsky’s death by Riccardo Drigo.

Jurowski is more inclined to symphonic sweep rather than relishing the moment. That said, Jurowski lacks nothing in terms of passionate commitment – the impact of his recording, especially when the 5 Channel DSD Surround Sound tracks are activated.  It is an all-engulfing – and conjures up a compelling emotional narrative.

Familiar – and glorious – music given a fresh approach under Jurowski who explained his thoughts on the score in last month’s ‘Musician and the Score’.