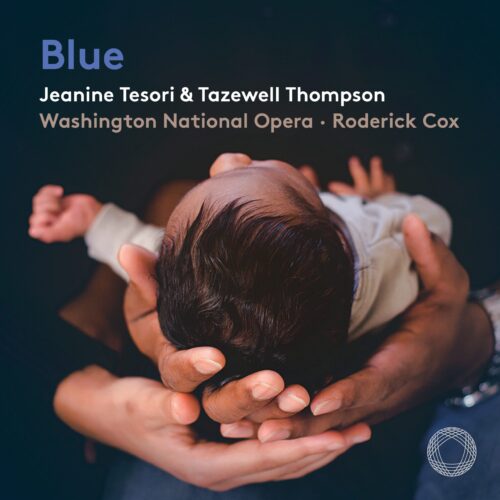 The Washington National Opera presents Blue, a contemporary opera on racial injustice in the US today. With a libretto by Tazewell Thompson set to music by Jeanine Tesori. This is a double album from Pentatone.

Blue tells the tragic story of an African-American police officer whose son is killed by a fellow officer during a protest. Strongly resonating with the Black Lives Matter movement, the piece is equally groundbreaking thanks to its intimate and layered portrayal of African-American family life on the operatic stage. Historically and musically, Blue compassionately tells a story that is at once painful and identifiable to so many of us.

The album is a production by Washington National Opera in association with San Francisco Classical Recording Company. It was recorded at John F. Kennedy Center for the Performing Arts, Opera House, Washington D.C., USA on June 21-29, 2021 by the team at Soundmirror Inc. with Producer Blanton Alspaugh, Recording Engineer Brandon Johnson and Mastering Engineer Mark Donahue.

The Music Critics Association of America named Blue the “Best New Opera” of 2020, while the Financial Times praised it as “an exceptionally strong new opera about race in America”, and hailed Tesori’s music as “eclectic, but assuredly so, full of beauty and eloquence.” The piece is sung by an excellent cast of vocalists, including Kenneth Kellogg as The Father, Briana Hunter as The Mother, and Aaron Crouch as The Son, while The Washington National Opera Orchestra is led by rising star conductor Roderick Cox.

Jeanine Tesori is one of the most important American composers of today, with a diverse catalog for musical theatre, opera, film, and television. Tazewell Thompson is an internationally acclaimed director, playwright, teacher, and actor. Washington National Opera is among the leading US opera houses, and has the mission to present stories that reflect the America of today.

Blue, an all-too-timely story of one family’s devastating loss — the teenage son of a black police officer is killed by a white police officer — is given universal resonance by Jeanine Tesori’s gripping, accessible music and Tazewell Thompson’s poignant, unflinching libretto.

Blue was selected as the recipient of this year’s award in mid-March, and we at MCANA are proud to be announcing the award now, in this difficult time, when many of its planned productions around the country had to be canceled, and because incidents like the one at the center of the opera continue to occur. We hope that this important work will see many more performances in the future.

Financial Times 5 out of 5

Blue deserves pride of place because it was a commissioned world premiere, and because it is very, very strong. Composer Tesori crosses all known boundaries, from acclaimed musicals (Caroline, or Change; Fun Home) to opera (A Blizzard on Marblehead Neck, also commissioned by Glimmerglass and first done in 2011, Zambello’s first season). She also teaches, works in film and television and is now writing a score for the Metropolitan Opera.

Two years ago Zambello asked Tesori and Thompson — a playwright and veteran Glimmerglass producer — for an opera about race in America. Inspired by James Baldwin, Claude Brown, Ta-Nehisi Coates and his own experiences, Thompson has produced a sensitive, poetic libretto. It tells of a black couple who are thrilled to have a baby boy, despite the warnings of friends who fear the fate awaiting so many young African-American men. The father is a New York City policeman, and between the acts the boy, now a rebellious teenager, is shot dead by a white cop. In the second act the father’s rage and the mother’s despair are gradually consoled with the help of their pastor.

Tesori’s music is eclectic, like so many new operas, but assuredly so. Her orchestration is rich and her vocal lines retain a beauty and eloquence, unlike so many new operas. Occasionally the opera skirts sentimentality, but is mostly loving in the first act and elegiac in the second. Thompson produces, and does an accomplished job. Donald Eastman’s décor consists of a back wall showing an angled city street façade that shifts colors hauntingly, along with roll-on set pieces.