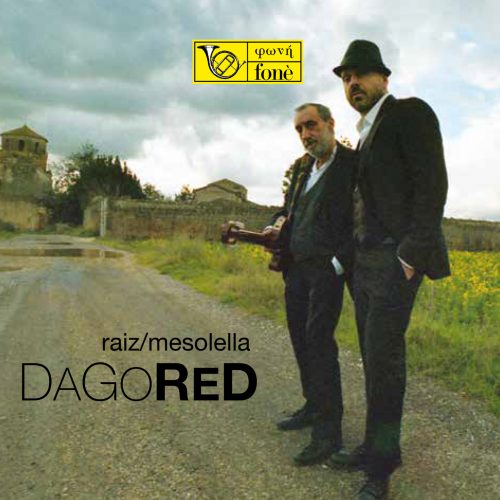 Mesolella and Raiz describe Dago Red as a mix of traditional Neapolitan music from Italy with rock and reggae music classics.  Resulting in a fascinating album that includes performances of I’m Your Man by Leonard Cohen, See Me Feel Me by Pete Townshend of The Who, Give Me Love by George Harrison of the Beatles, Rastaman Chant by Bob Marley and Arrivederci Rome made famous by Dean Martin. Each of these classics is paired with the music of Italy.  Resulting in a unique musical experience.

Raiz, one of the most beautiful, hot, intense and personal voices of Italian music, has embarked on a path of personal research with Fausto Mesolella, former guitarist of Avion Travel, as well as a collaborator and producer of a large number of Italian musicians.

Mesolella is a guitarist that is equally personal and eclectic. He is able to go from the traditional Neapolitan song to rock, crossing all the possible contaminations, but maintaining its specificity and its original touch. So it was almost destiny that the two Italian musicians of the south should eventually meet, and they did it in the best way, in this Dago red , which comes to seal a path started on Italian stages.

(…) Perhaps not a new experiment, but the uniqueness of this album is the mixing of genres and styles that we find within each song.

The starting point is the Neapolitan song, the classic one, the one that my generation, grown up on bread and punk rock, has always hated. And yet one is left speechless listening to a blending of Lacreme Napuletane and Immigrant punk. It has an intro voice and guitar, for one of the great classics of Libero Bovio, which deals with the theme of the emigration of the South to America (how bitter the bread of emigration). The voice of Raiz of stands in all its power and emotional charge, backed by touches of acoustic guitar Mesolella , which turns into an angry electric guitar when the song turns into punk scream, mixing in the center of the classic Neapolitan’s famous Immigrant Punk of Gogol Bordello, to close in a final voice and really touching acoustic guitar. (…)

Next we experience a Rastaman Chant with dialog between James Senese, the blackest of the Neapolitans, and Bob Marley. This is a meeting between music and cultures. It has a vaguely funky base supported by the battery of Mimi Ciaramella. Mesolella displays his talent, making the guitar talk with the voice of Raiz. (…)

Equally reckless is the experiment blending Third Stone From The Sun / ‘O surdato’ nnammurato / Give Me Love , where the electric guitar of Mesolella, plus the electronics of Eraldo Bernocchi, brings us the music of Jimi Hendrix, while Raiz sings the Neapolitan classic turning slowly into Give Me Love by George Harrison of the Beatles.

Dago Red (term taken from a story by John Fante which indicates the red wine of the Italian-born immigrant to America, where Dago was one of the derogatory terms with which Italians were called) is positioned a notch above the average of Italian music. It is one of the most interesting and intelligent discs from the Italian record market.