In The Studio with Carmen Gomes – Producer’s Note 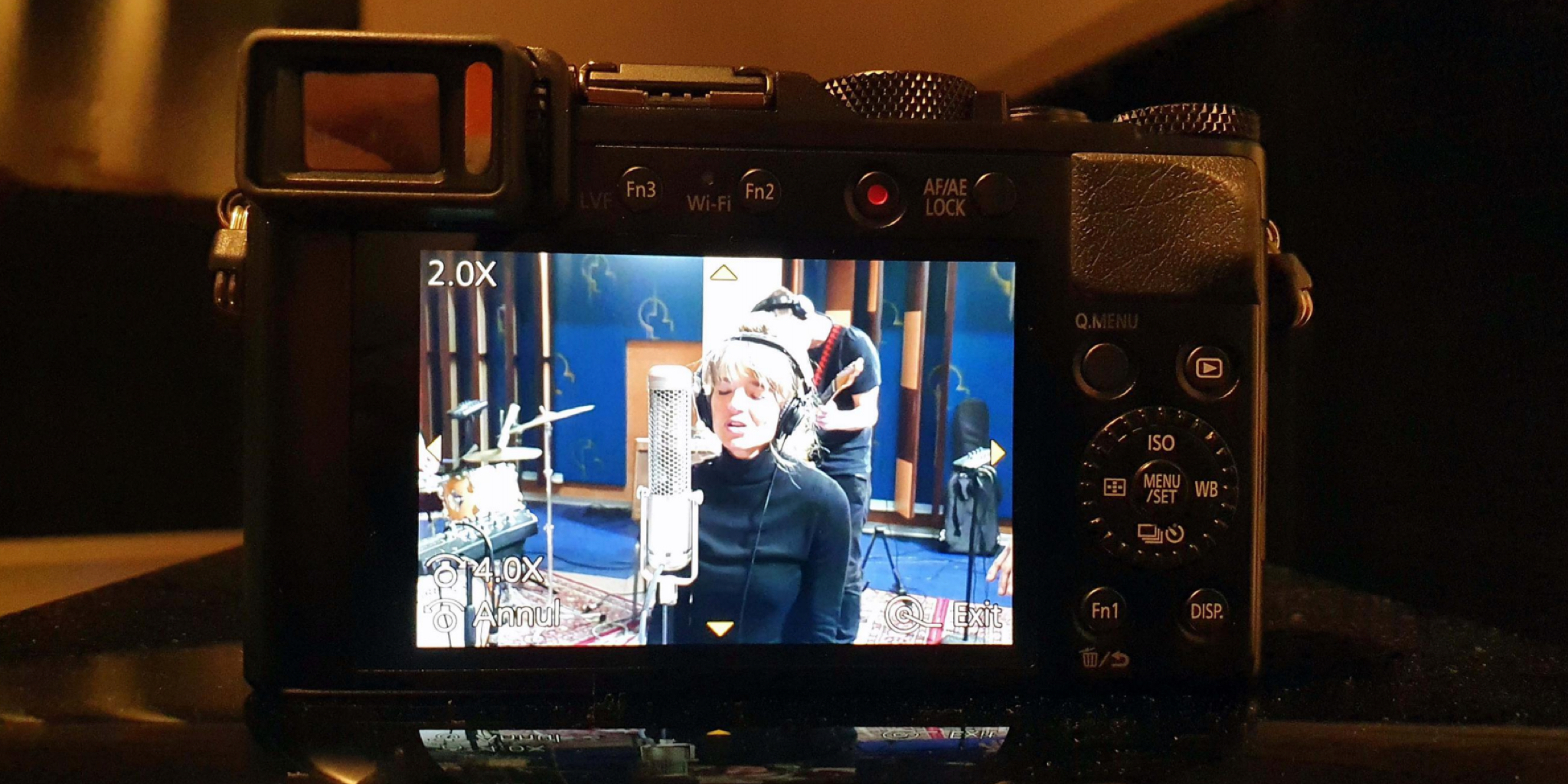 As I am writing this I am listening with my player randomly playing through these Sound Liaison recordings with Carmen Gomes Inc., I notice similarities and differences. If I name the similarities first, that’s the easy list. It’s the same band, recorded in the same room by the same engineer. The sound of the albums all have the Frans de Rond Visual Sound signature, great depth, clear placement and an almost physical presence of the musicians.

As each album was created in very different circumstances the list of differences is longer. Below I take you ‘backstage’ at the recording sessions of Carmen Gomes’ three DSD/DXD releases, available at NativeDSD Music.

🎁
Any purchased Carmen Gomes album purchase comes with an exclusive-to-NativeDSD video of the track “How Long”, made during the recording session of the album Don’t You Cry.

Carmen Sings the Blues is live, audience present, and the music is played with a certain edge; head engineer Frans de Rond remembers; “Normally when recording a live concert, I record the ”dress rehearsal” as well in order to have repair material just in case parts of the actual concert does not go as planned. However due to a technical failure, which I only managed to solve 10 minutes! before the start of the concert, this was no longer possible. So this recording is all first takes.

Carmen Gomes Inc. is a working band with lots of ‘road experience’ they remained calm and in good spirits despite the mildly chaotic rehearsal situation. Maybe the failed dress rehearsal contributed to the extraordinary dedication and concentration they performed with at the actual concert. It was now or never.

When an audience is present, a synergy occurs. The audience becomes part of the music making and helps spur the musicians on to greater heights.

I placed the musicians in front of a stereo pair of microphones with additional spot microphones on each instrument.

Musicians playing without headphones,creates a number of musical and technical benefits:

As they are not ‘’separated’ by the headphones, the musicians create a natural and musical balance, easily captured by the main stereo microphone pair.  Now the need for compression to control levels is no longer necessary, and the boxed sound which is so common on many modern recordings is absent.

This all sounds very straight forward but for this approach to work, certain criteria has to be fulfilled;

The studio has to have a good sound.

The musicians have to be very good and well prepared as it is very difficult to repair mistakes because of the “cross talk” between the instruments.

And with a live audience in the studio, we pray that they really turn off their cell phones (before the concert we always politely ask them to) and that the ones with a bad cold choose to stay at home.”

Don’t You Cry is a pure One Microphone recording. The credo for the recording was

One Hall, One Band, One Microphone, One Take, One Source. It was the first of our critically acclaimed one mic recordings. The reason for us to start recording in this way was the basic idea that we have one pair of ears, so why not take a stereo microphone, place it in front of the band and press record?… easy does it …but somehow it does not work like that. At least we had not yet heard a one microphone recording of a whole band that we found completely satisfying.

We are big fans of Josephson microphones. They are the secret to our critically acclaimed double bass sound. So we thought that if one mic would be able to do the impossible, it would be the Josephson C700S stereo microphone.

We had hoped to be able to try it out on a Carmen Gomes’ recording session, but there was an unforeseen problem with the delivery, the mic would not be on time. Having booked the studio and the musicians, we decided to go ahead and record the album the way we mostly do; a stereo pair and spot mic’s on the individual instruments.

We had just recorded the last song of the session when the Josephson C700S arrived.

The band had to go and play a gig in the evening and Frans had a lot on his mind that day, so nobody was really in the mood for testing a new microphone but Carmen said: Come on, lets just make a quick take of something simple; “Let’s play ‘How Long’!”. So we all gathered around the mic, made the take, packed up and rushed off to the gig of the evening.

Multi track recording has advantages and disadvantages. The good is that you can make an instrument louder or softer as you please. The bad thing when the recording is done in one room is phase. Maybe, the most time consuming aspect with multi mic recording is getting the phase between the microphones right. Frans de Rond is a true genius in that field and his expertise is one of the secrets to our well defined sound stage.

Now with only one mic the challenge lay elsewhere.

Mixing was no longer possible. We would have to make the complete sound stage right there by carefully moving each instrument closer or further away as well as left and right in relation to the microphone.

Carmen was given a headphone so she could hear exactly what the mic was hearing. She could then direct the musicians and with hand gestures let each band member play louder or softer.

Guitarist Folker Tettero decided to play the whole session on his old archtop guitar. It is quite unique that you can actually hear the pure acoustic sound of the guitar blending in so well with the sound from his custom made amplifier. Listen to Folkers comping during the bass solo in ‘Where can I Go’; that’s practically the pure sound of his guitar and not to forget; the sound of his hands.

Special credits goes to drummer Bert Kamsteeg who, while playing a full modern drum kit, managed to drive and colour each tune with his unique style, but never over power the pure non amplified sound of Carmen’s voice and my upright bass.

Up Jumped the Devil

On Up Jumped the Devil, discovering the music of Robert Johnson, we in a sense tried to expand on the idea of a one mic recording.

The concept for the album was to create an imaginary road movie where one perceives Robert walking late at night, en route in the Mississippi Delta, reflecting back on his life.

The low A, 27.5 Hz, from the bowed down tuned double bass representing the Mississippi night, the drums creating the sounds surrounding the night and the guitar being Robert’s mind.

For this to happen Frans needed to be able to use all his expertise in creating what I like to call a visual sound.

“There are several reasons at play why I call this is a One Mic+ recording.

On this recording the role of drummer Bert Kampsteeg is very important. We wanted him to be able to play as freely and dynamic as possible.

I realized that if we had Carmen up close to the one mic she was creating an acoustic baffle that covered up certain frequencies.

The same was true for Peter Bjørnild’s double bass.

By moving Carmen and bassist Peter Bjørnild further away and supporting them with two Josephson C700A microphones, the drum sound got much more present.

We wanted the small ‘soundscape’ compositions to have a very dark atmosphere (Peter said he wanted them sounding as dark as the Mississippi night), so I decided to add a spaced pair of Josephson C617 microphones up very high in the studio and let them be our main source of ambience. I think that worked very well. And also the deep drop tuned low ‘A’ of 27.5 Hz from the double bass got picked up very well by that pair. Such a low note is almost impossible to hear close up, somehow you only hear the upper harmonics generated, so that was an extra benefit of the ambient pair. And it made me fall even more in love with the sound of studio 2.

You could argue that this is a return to old fashioned multi mic recording but I don’t think that is true, drums and guitar and the main part of the double bass sound is still coming from the Josephson C700S. The microphone is absolutely central to the sound stage we have created.

The two C700A support microphones are identical to the C700S except that each has only one figure of 8 capsule.

But the beauty of these mic’s are that spill coloration is much less of a problem. So they are perfect as spot mic’s.

Another funny thing….I keep learning things about the C700S. I have to keep forcing myself to keep experimenting with distance, closer or further away from the mic, it is absolutely crucial to get the best possible sound. I don’t think I have ever captured Folker Tettero’s guitar better than on this album and it was a question of moving the right leg of the table with the amp on, 2 cm. (0,787 inch) backwards and there the sound was! Unbelievable.” Frans de Rond.

And there is more to come. Robert Johnson part 2, a Ray Charles tribute and we still have to mix the 2018 multitrack DXD recording that got interrupted by the Josephson c700s revelation.

As a special gift for our fans at Native DSD,

Frans mixed and mastered a not yet published video recording of the first take of How Long from the Don’t You Cry sessions. Notice how Carmen with hand gestures tells us to pick up the pace half way through the song. That’s why first takes are the best, there is always that little bit of magic.