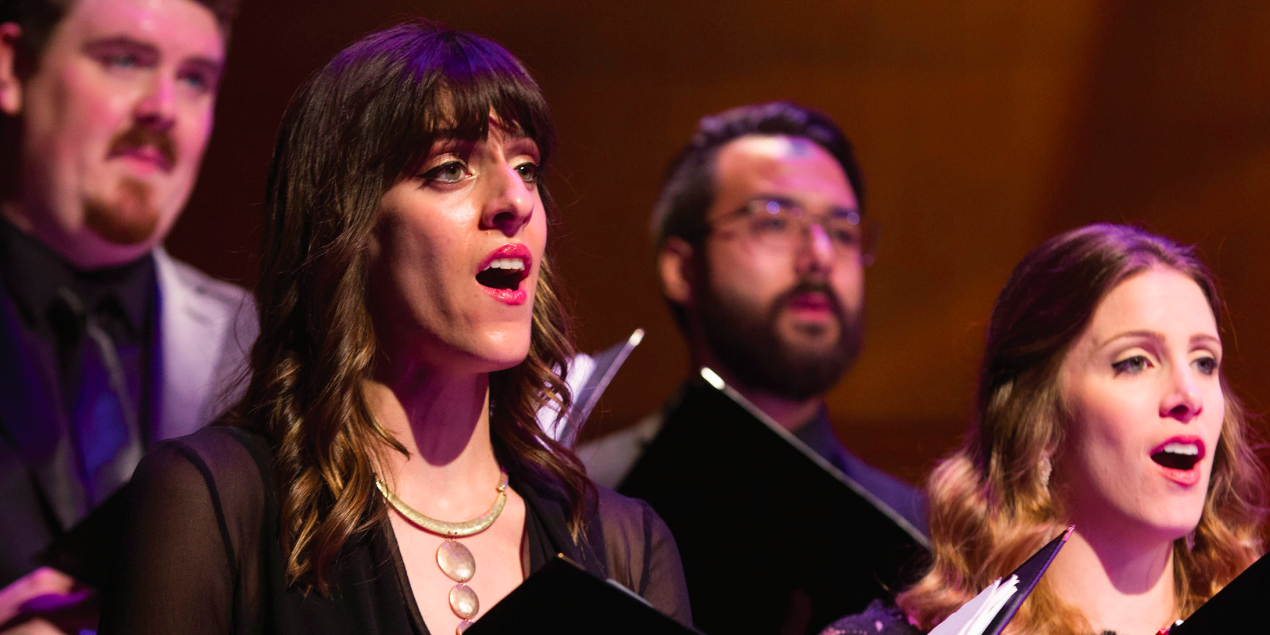 All Things Common celebrates choral music by Tarik O’Regan recorded in the British composer’s new home state of California. Tarik and family moved to the United States a few weeks before our recording sessions. They are happily ensconced in San Francisco, weathering the Covid-19 lockdown with perseverance and a healthy British sense of humor and patience. He’s thrilled with how the album turned out, which helps.

This is the first recording released by Pacific Chorale under the artistic leadership of Robert Istad, who assumed the directorship two years ago. The album features music by Tarik O’Regan, the Chorale’s composer in residence, and includes the world premiere recording of Facing West on text by Walt Whitman, which received its premiere performance by Pacific Chorale in Samueli Theater at Segerstrom Center for the Arts in Costa Mesa, California on May 18, 2019. The recording was made in Samueli Theater on May 20-21, 2019, recorded and mastered by Yarlung Records’ Bob Attiyeh, Arian Jansen, Steve Hoffman and Tom Caulfield. The album was underwritten by executive producer Lenora Meister. The program samples works from the last twenty years of O’Regan’s career, ranging from a 2001 setting of the liturgical Magnificat and Nunc Dimittis to the 2019 premiere of Facing West, performed by a 24-voice ensemble of singers from Pacific Chorale, with Istad conducting. Also featured on several tracks are instrumentalists from Salastina Music Society.

“Tarik O’Regan’s choral writing forever changed my musical perspective,” says Istad. “His music grabbed me with its rhythmic audacity, harmonic daring and unique wit. From that first hearing, I hoped I would be able to collaborate with him in some way. I speak for our singers when I report how much fun we had preparing Tarik’s music and performing it in concert and in this recording.”

O’Regan comments, “Working with Robert Istad and Pacific Chorale over the years has been an especially important experience for me and my music. Rob’s method of building a piece from page to performance (or, in this case, recording) is one based on a bedrock of precision and impeccable technique. It has been a privilege – and a lot of fun, let’s not forget that – to have been part of many different programs through many different seasons with Rob and Pacific Chorale. All Things Common permits a glimpse into our ongoing work together; I hope you enjoy it.”

Working with conductor and Pacific Chorale music director Robert Istad is always a pleasure. When he asked Yarlung to record his debut album with Pacific Chorale performing music by Tarik O’Regan, I knew we were in for a treat. Even though Pacific Chorale normally performs in the much larger Renée and Henry Segerstrom Concert Hall, I was delighted that we were able to work in the adjacent and more intimate Samueli Theater. I always enjoy making recordings in Samueli, with its magnificent and adjustable acoustics, silent air conditioning and lights, and a theater staff that always treats our Yarlung crew like returning royalty. Tom Caulfield joined us to record our GRAMMY®nominated DSD Album Sibelius Piano Trio in this same concert hall.

Tarik O’Regan has written music for a wide variety of ensembles and organizations including Pacific Chorale, Dutch National Ballet, the BBC Symphony Orchestra, Royal Philharmonic Orchestra, Australian Chamber Orchestra, Estonian Philharmonic Chamber Choir, Sydney Dance Company, Chamber Choir Ireland, BBC Proms at the Royal Albert Hall, and the Royal Opera House, Covent Garden. The Phoenix, his opera about the life of Lorenzo Da Ponte, commissioned by Houston Grand Opera with a libretto by John Caird, premiered in April 2019. Tarik’s work, widely recorded and published exclusively by Novello, has been nominated for two GRAMMY® awards and both New York Times and Philadelphia Inquirer Best Classical Releases of the Year for Threshold of Night; the National Endowment for the Arts Artistic Excellence Award, and a South Bank Sky Arts Award nomination for Heart of Darkness; a Gramophone Award nomination for Scattered Rhymes; and more.

Salastina Music Society performs with smaller or larger chamber orchestra ensembles depending on the music. For this recording, Salastina includes co-directors Maia Jasper White and Kevin Kumar on violins; Meredith Crawford, viola; Charles Tyler, cello; and Eric Shetzen, bass. Meredith Crawford is also known to Southern California music audiences as the principal viola in the Pacific Symphony, and Maia Jasper White as a member of the Los Angeles Chamber Orchestra.

Pacific Chorale has delighted national and international audiences with concerts of great choral music performed at the highest musical standards since 1968. Under the artistic leadership of Robert Istad, the organization produces a series of concerts each year at the Segerstrom Center for the Arts, where it serves as the sole resident choir. The mission of Pacific Chorale is to inspire our community through artistry and innovation in choral music performances and education programs. Pacific Chorale is recognized for exceptional artistic expression, preserving and performing classical choral music as well as stimulating American-focused programming. Pacific Chorale presents a substantial performance season of its own and is sought regularly to perform with the nation’s leading symphonies. Pacific Chorale has infused an Old World art form with California’s hallmark innovation and cultural independence, developing innovative new concepts in programming, and expanding the traditional concepts of choral repertoire and performance. The organization boasts over 30 world premieres and has released 14 self-produced recordings.
In addition to its long-standing partnership with Pacific Symphony, with whom Pacific Chorale made its Carnegie Hall debut in April 2018, the Chorale has performed with such renowned American ensembles as the Los Angeles Philharmonic, the Boston Symphony, the National Symphony, San Diego Symphony, Los Angeles Chamber Orchestra, Philharmonia Baroque Orchestra, and Musica Angelica. Pacific Chorale has also toured extensively to more than 19 countries in Europe, South America and Asia, and has collaborated with the London Symphony, the Munich Symphony, L’Orchestre Lamoureux and L’Orchestre de St-Louis-en-l’Île of Paris, the National Orchestra of Belgium, the China National Symphony, the Hong Kong Sinfonietta, the Estonian National Symphony, and the Orquesta Sinfonica Nacional of Argentina. Pacific Chorale also places a significant emphasis on choral music education, offering grades 1-6 after-school programs, a high school student summer camp, and a community-wide singing event at Segerstrom Center for the Arts.

Personally, I am very happy with how our singers performed and how the album turned out. I hope you enjoy it also, and I welcome your thoughts. Please let me know what you think.

Bob Attiyeh is Producer and Recording Engineer of Yarlung Records