Once upon a time… The sound, intimacy and beauty of the harp made soprano Caroline Erkelens look for a harpist to work with. After a long nocturnal phone call, she and Anne Koene decided to go for it. In March 2003, under the name of “Musica Del Cuore”, they performed together for the first time, yielding an eruption of creative energy. They were inspired by Anne’s three instruments (classical harp, concert harp and Celtic harp) to put together three concert programs which they performed many times. The duo was invited to the Concertgebouw’s Recital Hall to play the chamber opera “Julianas”, written for them by René Samson to a libretto by Olaf Mulder. During a special conference in France, they performed in honour of the Dalai Lama’s prime minister, playing e.g. Monteverdi’s Lamento di Arianna. They recorded the album Amor Vincit on the Aliud Records label and later performed in Rabat, Maroc at the International festival “Les cordes pincees 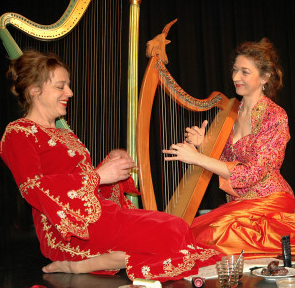