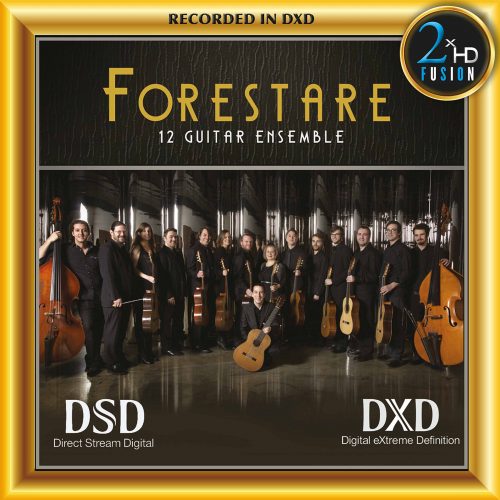 This unusual ensemble of 12 guitars, 2 double basses and the occasional percussion offers a fresh, 21 st century glance at the baroque era. Forestare’s more modern guitar arrangement gives a new perspective to this traditional music which is normally played by small string chamber ensembles with the occasional wind instruments.

The energy emanating from the players make this a captivating introduction to the classical genre in a contemporary way. Without betraying the authenticity of these timeless compositions.

The audiophile DXD recording took place at the Saint Augustin Church in Mirabel, Quebec, Canada, which is known for its fine acoustics. Only three Schoeps M222 microphones were used in the Pure Decca Tree microphone technique.

This set almost does what it says on the tin. A more accurate title would be ’12 Guitar, Two Double Bass and Occasional Percussion Ensemble’ – but while the massed instruments may stir thoughts of classical works played by ukulele orchestras, this is an exceptionally long way from that.

The dozen guitarists of the Forestare Ensemble have long been performing together, and it shows in this wonderfully energetic and detailed recording of works by Bach, Vivaldi, and Jean-Baptiste Lully, fully revealing the immersion of the players in the Baroque styles here – impressive, since to date their repertoire has been more modern.

Of course, the exemplary recording to DXD, by the 2xHD team of producer André Perry and recording and mastering engineering René Laflamme, plays its part, too, not only in capturing all the intricacies of the scoring and playing, but also the sheer brio of the performances and the lively Montréal church acoustic in which the performances took place.

That’s in no small measure due to the recording technique: faced with 15 musicians, the team eschewed a multiple- microphone approach, instead going for just three Schoeps mikes in a pure Decca Tree configuration of left, right and center.

It all makes for a delightfully lucid, unforced sound, inviting the listener to make the decision whether to focus closer into the generous soundstage or just let the music pour forth. Either approach is equally rewarding.

Journal de Montréal 5 out of 5

An innovation that’s truly out of the ordinary, appealing to all Baroque and guitar enthusiasts.

Chili’s Radio Beethoven 5 out of 5

The best guitar ensemble of the moment.