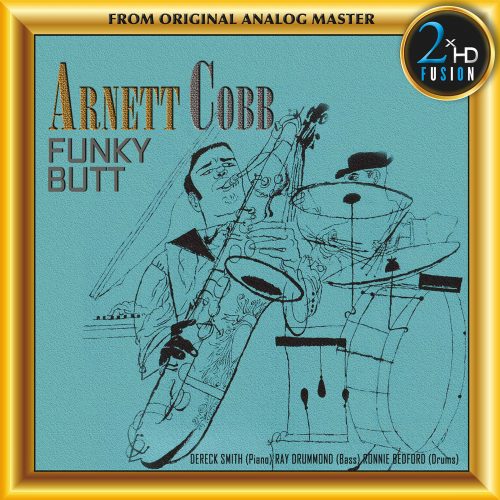 Funky Butt is Arnett Cobb’s final recording. Grammy Award winning Jazz Legend Arnett Cobb is an American music pioneer. His larger than life playing style separates him as a master saxophonist & icon. He was sometimes known as the “Wild Man of the Tenor Sax” because of his uninhibited stomping style.

Cobb, a Tenor Saxophone player from the 1940s who (like Illinois Jacquet) fused together some of the most exciting aspects of swing and early R&B, is in typically exuberant form on this quartet set with pianist Derek Smith, bassist Ray Drummond and drummer Ronnie Bedford. Cobb is warm on the ballads, but the stomps are what make this record most memorable.

The album features a host of standards including Jumpin’ At The Woodside by Count Basie, Satin Doll by Duke Ellington, Georgia On My Mind by Hoagy Carmichael & Stuart Carroll, I Got Rhythm by George & Ira Gershwin, September In The Rain by Al Dubin & Harry Warren, Isfahan by Billy Strayhorn and Radium Springs Swings by James Newton.

Game show fans will recognize Jumpin’ At The Woodside as the Theme for Gene Gene The Dancing Machine on The Gong Show with Chuck Barris.

This is an Analog Master Tape to Stereo DXD and Stereo DSD transfer by Rene Laflamme at 2xHD Mastering.

One of the hard blowing “Texas tenors”, Arnett Cobb threw himself into his playing, earning the title of “The Wild Man of the Tenor Sax”. The nickname is fully justified by the opening track here, a punchy version of Jumpin’ at the Woodside. British emigre Derek Smith provides swinging backing, as do Ray Drummond and Ronnie Bedford, the latter adding some steamy drum breaks.

Satin Doll reveals the smoother side of Arnett Cobb – at least, to start with, but the sound gradually becomes more rasping. Derek Smith’s half-chorus doubles the tempo. Arnett pours emotion into Georgia on My Mind. The title-track is a Cobb original – very bluesy and funky. Derek Smith’s solo emphasizes the blues element. I Got Rhythm is taken at a furious pace, with Arnett’s tenor sax honking energetically.

A gentler but still assertive side is revealed in Isfahan, originally a feature for Johnny Hodges with the Duke Ellington Orchestra. Derek Smith’s solo is masterly. This 1980 album is a gift for those who like their jazz swinging relentlessly, with a gutsy Texas tenor backed by a superb rhythm section.