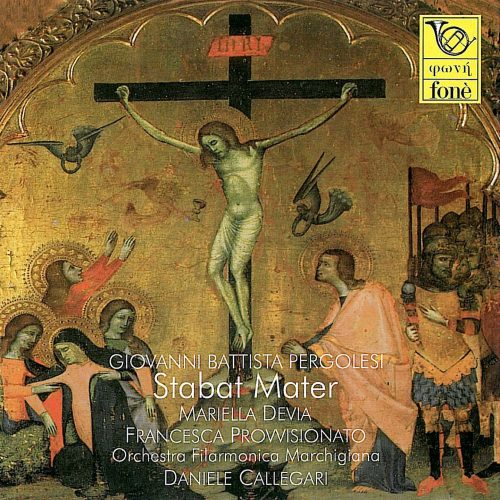 Giovanni Battista Pergolesi was born in 1710 in Jesi and died in Pozzuoli in 1736, struck down by consumption when only twenty-six. Unlucky as far as his health was concerned, he was gifted, by way of compensation, with a spontaneous and powerful musicality which was immediately communicative. His fame as a composer spread far and wide so rapidly that he was imitated by many, and numerous works were wrongly attributed to him. Pergolesi was active in both theatrical genre and in sacred music and his genius is synthesized in two works of opposing character, the opera buffa La serva padrona, and the Stabat Mater. The latter is a sublime and sorrowful lament by the Virgin confronted with her Son’s sacrifice on the Cross. The text that Pergolesi set to music is the ancient Latin sequenza attributed almost certainly to Jacopone da Todi, that remarkable monk and poet who lived between 1230 and 1306. Traditionally understood to have been a well-off and jolly character, Jacopone converted to a most fervent religious mysticism after having survived the collapse of his palace, and after a cilice (a tough garment of penance) was found on the body of his wife who died in the disaster. From that point on, Jacopone expounded his faith and his intense desire to partecipate in the Passion of Christ in verses of rough semplicity fired with fervour. As the Dies Irae, the Stabat Mater is a strophic composition in which the verses are linked by rhyme and assonance. The theme is the grief of the Madonna at the foot of the Cross, and the anguish of the faithful as he shares in the suffering of the crucifixion.