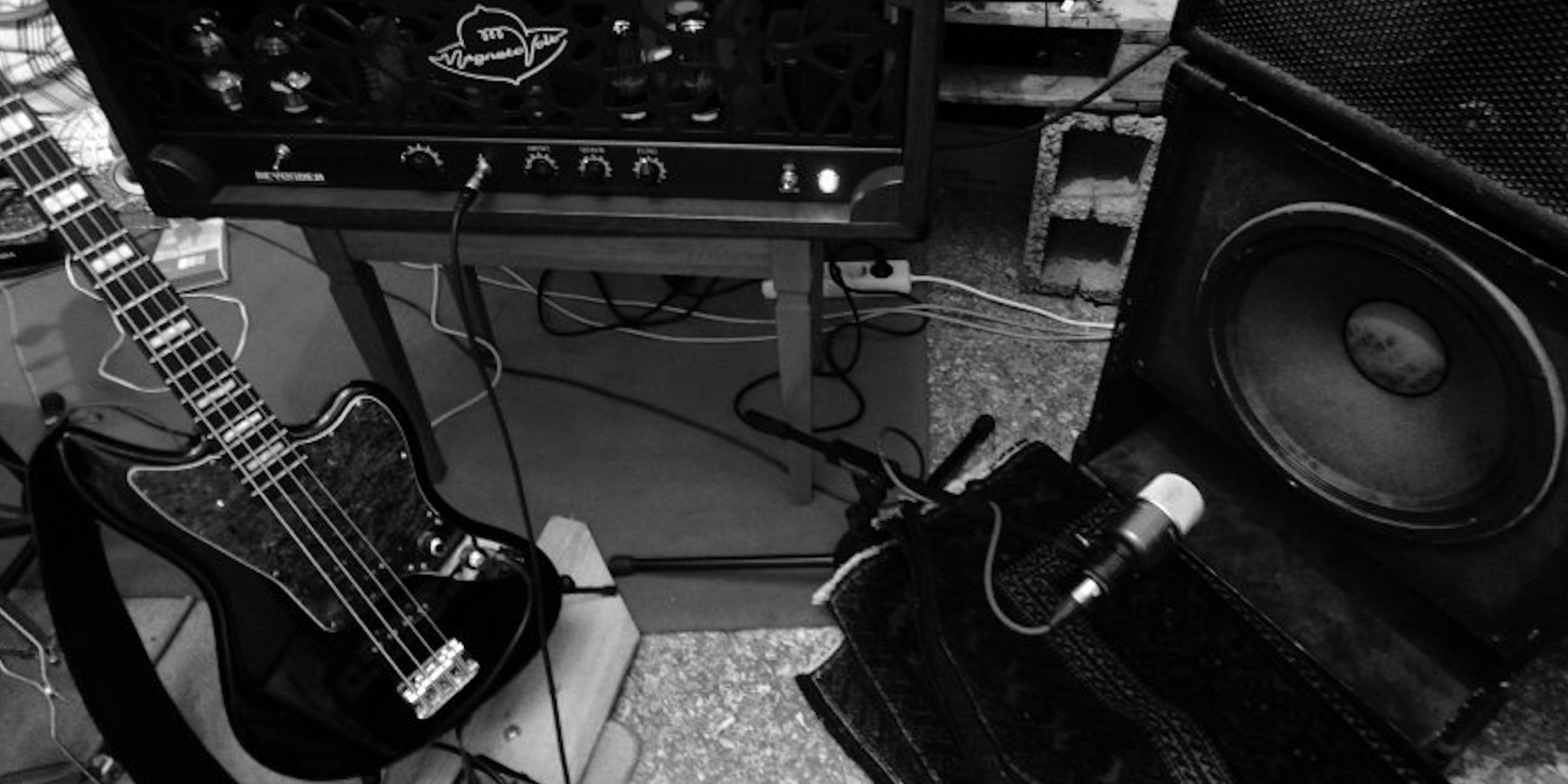 It is not easy to outperform yourself, when you have already released two highly successful albums and an EP (“LP”, “II”, “EP” https://magneticfidelity.nativedsd.com/ and https://fwrlrecords.nativedsd.com/), especially when you are busy touring the world, like Naxatras.

…normally done with multitrack recording, but we preferred the old-fashioned approach,

Their third full length album, titled “III”, took longer than any of their previous albums to complete, and the approach was different. The music was performed live in the studio, mixed on the fly and recorded straight to a stereophonic tape recorder, using vacuum tube equipment, as with their previous albums. However, the vocals were recorded on top, this time! This is normally done with multitrack recording, but we preferred the old-fashioned approach.

Prior to the invention of multitrack recording, it was already common to record the instrumental parts and the vocal parts separately. To achieve that, two tape machines are needed. One is used in the usual manner to record the instrumental parts. Then the recorded tape is reproduced and the signal is sent to a mixer, where it is mixed together with the vocal signal from a microphone. The vocalist can hear this over the headphones, while singing. The mixed outcome is being recorded by the second tape machine. The process could be imagined as being similar to karaoke, but a bit more refined.

John Delias had significantly augmented his guitar pedal collection and even used the Magnetovolt FudGe, a very strange analog effect unit of my own invention, which turns sound into thick FudGe by using germanium transistors, germanium diodes and internal positive feedback. John Vagenas was using the Magnetovolt Beyonder, a huge vacuum tube amplifier designed exclusively for him. The circuit is of my own design and is very unusual, in that transformer coupling is employed between all stages, no feedback is used, and the 6550 tubes in the output stage are power-driven, which means that they require a smaller power amplifier to drive them, included in the same 70 Kg enclosure, along with the necessary 600 W vacuum tube power supply…! Kostas Harizanis brought in a Ludwig custom drumkit, complete with Swiss and Turkish cymbals. The guest musician this time was Filon Geropoulos, who played my vintage Magnatone guitar, as well as an acoustic guitar. He also bowed some cymbals while John Vagenas plugged in his analog synthesizer to the Beyonder, for some proper “special effects”.

it is intended to place the listener in the drum throne

For the first time in the history of the band, John Delias can be heard on lead vocals, in one of the selections on the album. The instrumental parts were recorded in May 2017 and the vocals were recorded in December 2017. The entire process was fully analog, as always, even down to the analog reverberation and delay effects throughout the album. The recording was engineered to convey to the listener the feeling of being among the band members rather than being at the distant audience position. More specifically, it is intended to place the listener in the drum throne, offering the drummer’s perspective of the performance.  While this may not immediately become obvious to the average person, anybody who has spent a considerable amount of time sitting behind a drumkit, playing in a band, will certainly be able to relate.

The band requested a more vintage sound this time, approaching the feel of their debut album. Back in the day, the tape formulations available were already compressing above 185 nWb/m, and recordings much lower than that resulted in unacceptably high levels of noise. The tendency for electric instrument music was to record at a higher level, resulting in audible tape saturation. Many people find this effect so pleasant that there are countless computer software plugins attempting to emulate it for digital recordings, using DSP algorithms. Modern high output tape formulations are not as easy to saturate though. Most tape machines would be electrically overloaded long before real tape saturation is encountered. Fortunately, my customised Telefunken M15A machines are truly medium-limited rather than electronics-limited and can properly saturate any tape. I set the nominal operating level at 500 nWb/m and measured incoming peaks reaching +16 dB over that! This is +25 dB over the 0 dB tape reference fluxivity of 185 nWb/m!

We used ATR Magnetics 1/4″ master tape, for which the manufacturer specifies the saturation output level as +23.5 dB at 1 kHz, so we were operating with 1.5 dB of magnetically induced peak limiting at 1 kHz, increasing at higher frequencies. My measurements showed an average dynamic range limiting of approximately 4 dB, as a result of re-recording to tape a second time for the vocals.

… this seemed like the ideal opportunity to minimise the signal path and make a virtue out of the physics of magnetic tape recording.

This was an interesting experiment in dynamic range processing. Most recordings of rock and pop music on any medium are heavily compressed, using electronic circuits known as compressors and limiters, often set to much more severe settings than the 4 dB previously mentioned. But why use additional circuitry when the medium itself already comes with a built-in dynamic range compression feature? Those of you familiar with my work probably know I am a relentless minimalist, so this seemed like the ideal opportunity to minimise the signal path and make a virtue out of the physics of magnetic tape recording.

The end result was tested on a wide range of sound systems by the band, who felt that although it sounded great on good quality systems, it tended to overload smaller budget systems. As is usual in the music industry, the PCM versions of the recording were premastered to increase compatibility with all types of reproduction systems. This essentially involved the reproduction of the master tapes on one of the M15A machines, with the outputs connected to a Manley Massive Passive Mastering Equaliser, which in turn was connected to the A/D Converter. The equaliser was adjusted for a smoother finishing touch.

Thus, the DSD release comes in two versions, the Raw version, and the Smooth version.

In preparation for the DSD release, we were discussing whether the processing with the equaliser should also be done for the DSD version or not. Since the target audience for DSD is more likely to be using high-end equipment, it was felt that the original version might be more appropriate, but then again, the processed version was indeed the one intended for commercial release, since we have no way of knowing what equipment will be used by those who will listen to it. Unable to decide what would be best, we realised it might be wise to leave this choice up to the individual user.
Thus, the DSD release comes in two versions, the Raw version, and the Smooth version. The Raw version is a more accurate documentation of the real event, whereas the Smooth version was the processed version, intended to maximise acceptance by a wider audience. It conforms better to norms of how things “should” sound rather than how things “do” sound. If you are curious about the difference between the “should” and real life, just compare the two versions and find out for yourself!

Naxatras have succeeded once again in surpassing themselves, releasing an album containing more than an hour of highly original and authentic music, reflecting their increased level of experience through more complex compositions and remarkable performances! Considering that they actually performed that stuff live, with no technical assistance, it is easy to understand why they do not do multitrack recordings: They simply don’t need it, if they can already play like this is real life!

Now, after listening to their third album, I am confident that they are legends in the making.

I still remember hearing the first few songs of their debut album as it was being recorded, and thinking to myself that we’ve just found some serious talent who are bound to become successful. I was proven right. Now, after listening to their third album, I am confident that they are legends in the making. I have the feeling this is only the beginning of a long career, the third out of many more timeless albums that will follow.

Or, get both and save by purchasing the bundle.

J. I. Agnew is an award-winning recording/mastering engineer, working with analog tape machines, disk mastering lathes and vacuum tube electronics. Along with his wife, Sabine, they run Agnew Analog Reference Instruments, specializing in high-end audio electronics design and precision mechanical engineering services pertaining to analog recording and reproducing equipment. He was educated in Greece and England, was awarded a scholarship for his doctoral research at the University of Sheffield and was teaching at the same institution until 2010. He is a member of the Audio Engineering Society, the American Society for Mechanical Engineering, the Institute for Electrical and Electronics Engineering and the American Society for Precision Engineering.