Soloists Chorus and Orchestra of the Bolshoi Theatre Moscow 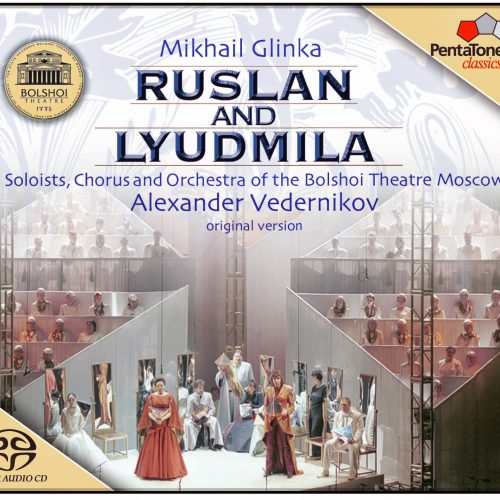 “opera as it was meant to be heard”

This is the Ruslan and Lyudmila we’ve been waiting for. The music flows. The singers are all excellent. The chorus is clear, the Bolshoi orchestra is fantastic. Performance-wise, there is little if anything that I would complain about.

In multichannel, the orchestra, the chorus and soloists are in perfect balance. Virtually every detail of the orchestration is crystal clear, the different vocal timbres of the choir nicely separated, the soloists in good perspective, all the while harmony and balance between the assembled forces is maintained. The violins are bright, but always nice and warm. There is good separation between the various string voices. The brass instruments are the most spectacular: recorded with a true three-dimensional sonority. They are never two-dimensional, squeeky or congested.

Percussion has just the right amount of bang and reverb. In other words, this thing sounds like a concert. I’ll go even further and say that it actually sounds better than a concert.

This new critical version goes back to the original Glinka scores and attempts to recreate the opera as it was meant to be heard, rather than the version which has been played in the past century.

A very special Thank You to Pentatone for releasing this. I’ve waited a long time to hear Ruslan and Lyudmila given the proper treatment. The result is worth the wait.