Dvorak: Symphony No. 9 – From the New World & 2 Slavonic Dances 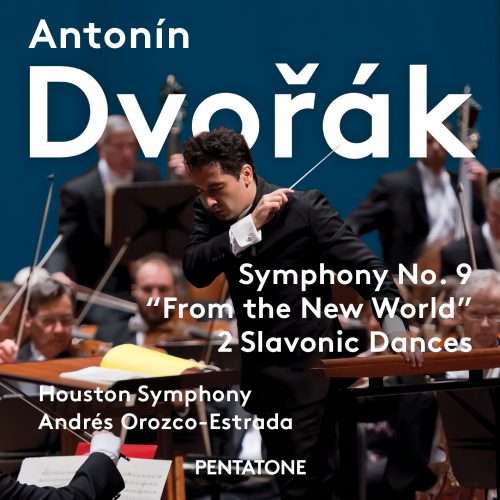 Dvorak’s New World Symphony is counted among the most successful and distinctive symphonies ever written and it loses none of its drama or appeal on repeated playing. Inspired by American spirituals and Henry Longfellow’s epic poem The Song of Hiawatha, this infectiously tuneful work with its brilliantly colourful orchestration and rhythmic verve has its creative wellspring in Dvorak’s own homesickness. It was condescendingly described by his critics as a “Czech composer’s impression of the country” but its qualities were never in doubt and its inventiveness and warmth radiate from every page. From beautiful, wistful melodies, to unfettered exuberance and glorious, sustained climaxes, this extraordinary symphony has it all.

This is Orozco-Estrada’s fifth recording for PENTATONE. His earlier discs of Dvo?ák symphonies were described as “Vivid and colourful, overall well balanced” (Pizzicato) “an interpretation full of theatricality, with a sure sense of the monumental” (Gramophone).