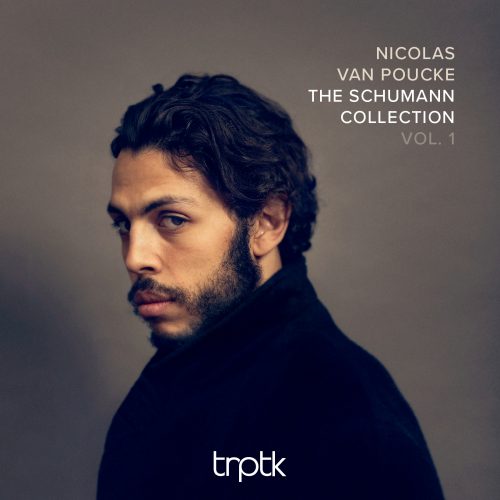 Pianist Nicolas van Poucke set to record a collection of his favorite works by Robert Schumann. The Schumann Collection, Volume 1 is the first album in that series. The new Stereo and Multichannel DXD recording features Schumann’s Carnival, Op. 9, Fantasiestücke, Op. 12, and as icing on the cake, Arabeske, Op. 18.

“This is what I love so much about Schumann’s music. If I play Mozart, for example, you make up your own story connecting the pieces and stimulate your fantasy around them. You must create a narrative you play the program within. And that’s totally the opposite of what the composer originally meant with it, but it gives you structure in the fantasy around the piece.

With Schumann, though, it’s a different kind of story. He clearly tells you what he means, or envisions, with his music. You just need to get as close to what he meant as possible. I try to get myself into that sphere – which is an enormous task in itself – and then you still must be able to communicate that by converting all of this into the technical and mechanical side of things.

In the end, it’s about pressing keys on a keyboard. You can think of it as artistic big deal and all, but it’s just as much simply a craft. It’s all in translating what’s written on paper into playing the instrument, materializing this fantasy world into the mechanicals of it all.”

You can read more about this album in an interview featuring TRPTK’s Brendon Heinst and Pianist Nicolas van Poucke in this article on the NativeDSD Music Blog.

A word with the young freethinker among Dutch pianists

Nicolas van Poucke belongs to a young generation of Dutch pianists who are endowed with cheerful and hopeful immense talent, which makes you wonder how far that will take him. At the age of 28, at least up to the Queen Elisabeth Hall in London, where he played Beethoven’s Third Piano Concerto last September with the Chineke! Orchestra – for a completely empty hall.

That remarkable time during the Covid pandemic also enabled him to work on his second album in peace. The first, with works by Chopin, was critically acclaimed. Number two can also be cheered on. The Schumann Collection Vol. 1 is the title.  Guaranteeing that there is even more Schumann in the pipeline in the coming years.  Judging from Volume 1, that’s something to look forward to.

Few pianists manage to approach this musically and psychologically complex world with so much naturalness. Van Poucke plays the 21-part Carnival, which can be understood as a fragmented self-portrait, with a rich touch and a lot of musicality. Even more beautiful is the Fantasiestücke, which Van Poucke brings to life with a beautifully dimmed tone.

In the closing Arabesque he shows daring rubati. The eight minutes will be over before you know it.

What a pleasure to listen to this quite extraordinary pianist, Nicolas van Poucke, in this new release from TRPTK. His performances of the Schumann works on this album are totally engaging, full of musical intelligence and emotional depth.

There are so many performances of Carnaval by great pianists such as Rubinstein, Katchen, de Larrocha, Michelangeli, Cortot Anda, Arrau, Freire. Why am I recommending this new performance by van Poucke?

I’m recommending it for two reasons: 1) he really does have a unique voice, something different to share in this music and 2) this is the best sounding recording of Carnaval that you’re going to find—it’s worth adding to your library just for the superb sound quality. For my music listening, I enjoy having both qualities.

Nicolas takes a more deliberate, more thoughtful introduction to the first movement on this recording, the Préambule of Carnaval by comparison to some other pianists. He plays this first movement with some contemplation of where this is all going, with just a hint of a lingering phrase here or there. For me, this bodes well. I get tired of the renditions that are all “hell bent for leather,” beating these notes out as fast as demonically possible and to the point of losing any meaning to the music. I won’t list for you the numbers of performances I find doing this, let me just say that Nicolas achieved so much more in his first two minutes and nineteen seconds.

This thoughtful approach to Schumann’s music continues throughout this recording. Not just in the Carnaval, but also in the Fantasiestücke and the Arabeske. He plays demonically fast and powerfully when called for but is willing also to linger when appropriate and to savor a phrase.

In the opening movement of Fantasiestücke, for example, Nicolas plays delicately, lingeringly, gently savoring the moments, with delicate spacing between notes allowing the reverberation of the strings to expand and fade away. Then he launches “Aufschwung” (the next movement) with a flurry of declaiming notes and energy; not pounding away furiously, no. This is still well judged, shapely phrased playing, full of intention and meaning. Well done!

The recording quality with which these performances are presented is another excellent accomplishment by Brendon Heinst. Well done! The sound has a resonant, reverberant yet open quality. We are close into the piano, hearing the initial transients of the hammer strikes with immediacy and basking in the reverberations of the strings. This is, to me, more the artist’s perspective on the instrument than an audience member’s perspective. And this is the producer’s and recording engineer’s choice to make. The recording is a work of art designed to create an emotional response. And it does. It creates in this listener quite a thoroughly engaged, full immersion, response to the music.

In summary, these are performances I find very attractive. I fully expect to come back to them again and again, as I have already done over this past week since the recording was released.

Not so long ago, the LP above everything else was the motto of Nicolas van Poucke. In any case, he did not want much (more) of the CD, was his message to me. But the tide has clearly changed, prompted by Brendon Heinst of TRPTK, who used the best possible recording technology, state-of-the-art, for his first Schumann album on TRPTK.

After his Chopin album, Van Poucke turned to Schumann this time. Judging by the title of the album: The Schumann Collection Vol. 1, suggests that there is even more Schumann to come. Fortunately, no one needs to regret this sequel either, because Van Poucke knows his way around these romantic piano works particularly well. This is music that suits him well. Just as it was then for Chopin’s piano works. It confirms once again that artistic success usually cannot do without self-knowledge.

In short, stylistically there is much to enjoy thanks to this playing by a Dutch pianist who has long since passed the technique and has thus managed to make the substantive side of these scores his own; and with that also to our music lovers.

His Schumann album has all the positive characteristics of his Chopin recital, although it goes without saying that he ‘treated’ the piano works of the two composers differently. Once again there is that intense concentration and willingness to take (responsible!) Risks within the defined boundaries of the score. The countless details are beautifully and convincingly highlighted, the accelerations and decelerations, melodic and harmonic accents are created from a well-thought-out concept. The entire discourse underlines its uniqueness.

It is also striking how much Van Poucke expresses the split in this music, both in ‘Carnaval’ and in the (8) ‘Fantasiestücke’. He makes it clear with great conviction and expressive commitment that this is music in which traditional boundaries are crossed and it is clear that German Romantic idealism has now had its day. Poetry captured in music that, as in ‘Carnival’, under the hands of Schumann but also that of Van Poucke takes on an unmistakable, cross-border connotation. Intimate, comfortable homeliness that contrasts extremely sharply with the fantasies derived from the thoughtful Eusebius and turbulent Florestan.

With Van Poucke, the form and content of these character pieces (they stem from Schumann’s ‘early’ period, 1835-1839) effortlessly fall into place. This applies to both ‘Carnival’ (the subtitle given to the 21 parts actually speaks for itself: ‘Scènes mignonnes sur quatre notes’) and the more independent character sketches of op. 12 (‘Fantasiestücke’) are beautifully expressed under his hands.

Also impressive is Van Poucke’s view of the dew-glittering final piece: the (well-known) ‘Arabesque’, about which the composer himself remarked that it was nothing more than a delicate salon piece, weak and stylistically light-footed. Van Poucke nevertheless knows how to make a lot of it, just as the piece should sound: ‘leicht und zart’.

I have not kept up with the latest developments in recording technology, but it will undoubtedly suffice for those in the know that this album was recorded in DXD 352.8 32-bit and that the music lover does not need to know anything other than that the Steinway D -274 comes out of the speakers with great authority. Maarten Kools’ cover photo is a small plate with all the characteristics of a nineteenth-century portrait painting. Coincidence?