Off with the V! 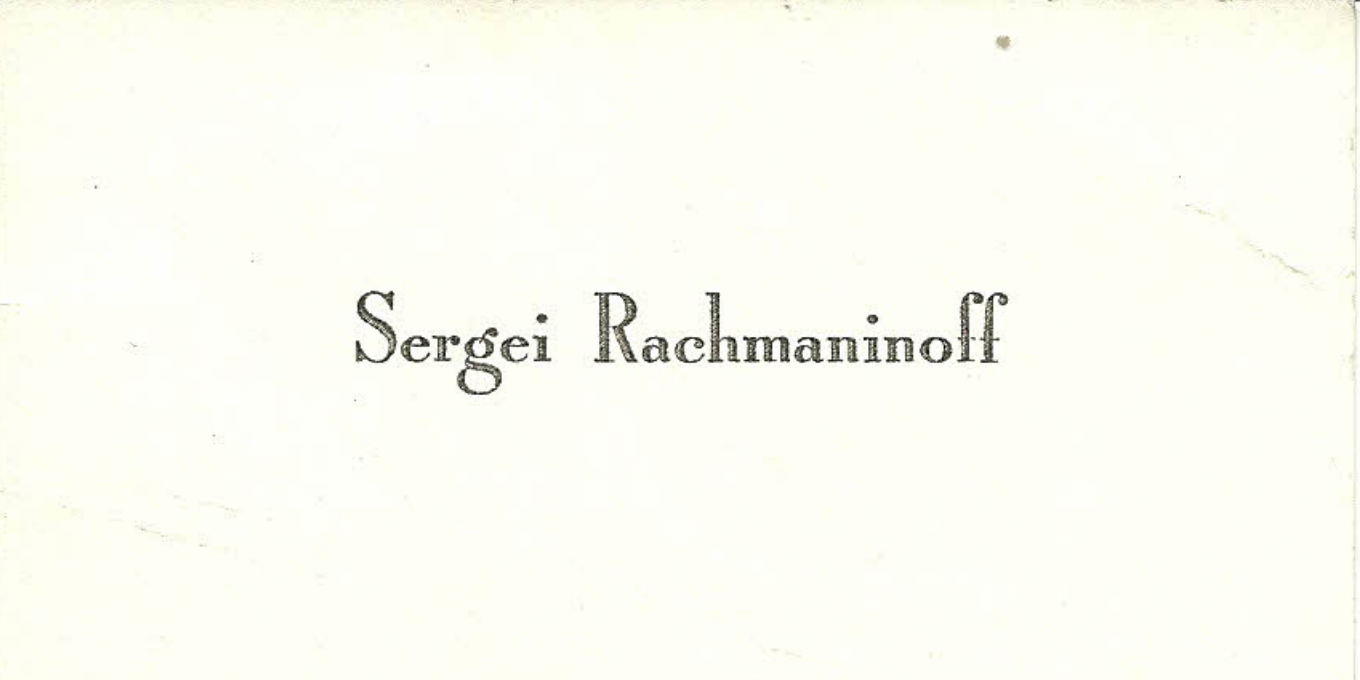 You might recall, in my blog post from this past October I wondered: “Is it Rachmaninoff or Rachmaninov?”

About 75 percent of the listings at the NativeDSD Store use -ov, and the rest use -off. I tended toward the -ov, but good old Microsoft Spellcheck prefers -off. Searching can be an issue, so I suggest searching for “Rach” so that they will all pop up. Besides, you don’t have to type as many letters!

Let’s spell the man’s name the way he wanted

OK, so why am I bringing this up again? Because I have the answer! I just received this message from Ettore F. Volontieri, General Manager of the Serge Rachmaninoff Foundation in Switzerland:

It’s a pleasure to be in touch with you and many thanks for your interest on Rachmaninoff music. I have read with great interest your feature “Mostly Rachmaninoff” appeared on the site Native DSD music and I was obviously intrigued by the initial dilemma “Is it Rachmaninoff or Rachmaninov?”.

Please allow me to a small personal introduction. I met with Alexander Rachmaninoff – the grandson of Sergei Rachmaninoff and the only surviving son of Tatiana Conus, the second daughter of Sergei and Natalia Rachmaninoff – in 2004 and I started working for him and his Serge Rachmaninoff Foundation, which he had incorporated in 2000, in the Autumn of 2005. I have been Alexander consultant for the following 7 years, until he suddenly passed away of a stroke at the beginning of November 2012. Since 2013 I have been serving as General Manager of the Serge Rachmaninoff Foundation that has fortunatelly survived to Alexander sudden death thanks to the generous engagement of a few friends of Alexander, such as Welz Kauffman (CEO of the Ravinia Festival), Timothy Walker (CEO of the London Philharmonic) and Bruno Hamard (at the time General Director of the Orchestre de Paris).

Since the very beginning the activity, beside the goal of promoting the lesser known works of the composer (such as the Piano sontata no. 1, the Symphony no. 1 and the one-act operas), Alexander wanted to reaffirm the correct spelling of the composer, “Rachmaninoff” versus “Rachmaninov”, which only after the death of the composer and performer started to be in use in the music industry. In fact, being Sergei Rachmaninoff alive, it’s just impossible to find a different spelling than “Rachnmaninoff” in all posters, recordings, letters, documents, anything that concern the public mention of the name of the composer. Linguists will tell us that the correct way of translitterate the russian name is clearly “Rachmaninov”, but there is much more behind the choice than a pure linguistic argument. The historical reality is that this was a choice of the bloshevics against the “frenchish” version with FF, which was used during the time of the Romanoff : the fact the the family of Sergei has been litterally devastated during the October revolution – 22 members of his family were murdered – and his Estate of Ivanovka burned out made clear for Sergei that to keep alive the spelling “Rachmaninoff” was a political and cultural statement.

Based on this elements, we have obtained that many institutions and player of the music industries switched from “Rachmaninov” to “Rachmaninoff”, (recording companies such as Chandos and EMI, as well as institutions such as the Konzerthaus in Vienna or the Philadelphia Orchestra in the US). The “battle” is still on, we are thinking of launching a campaign called “Off with the V”, but we have now to focus on the legal issues with the legal heirs of Alexander Rachmaninoff to preserve the Villa Senar – the estate of Sergei Rachmaninoff on the Lake of Lucerne – as a cultural center.

I wish you all the best and I hope you will agree, from now on, to use the form “Rachmaninoff” in your further features related to the composer.

Of course Native DSD will continue to make album listings as they come from record companies. But I’m convinced! We should spell the man’s name the way he wanted. I hereby resolve to always use the -off spelling when discussing one of my favorite composers! Off with the V!! I love it, Ettore!