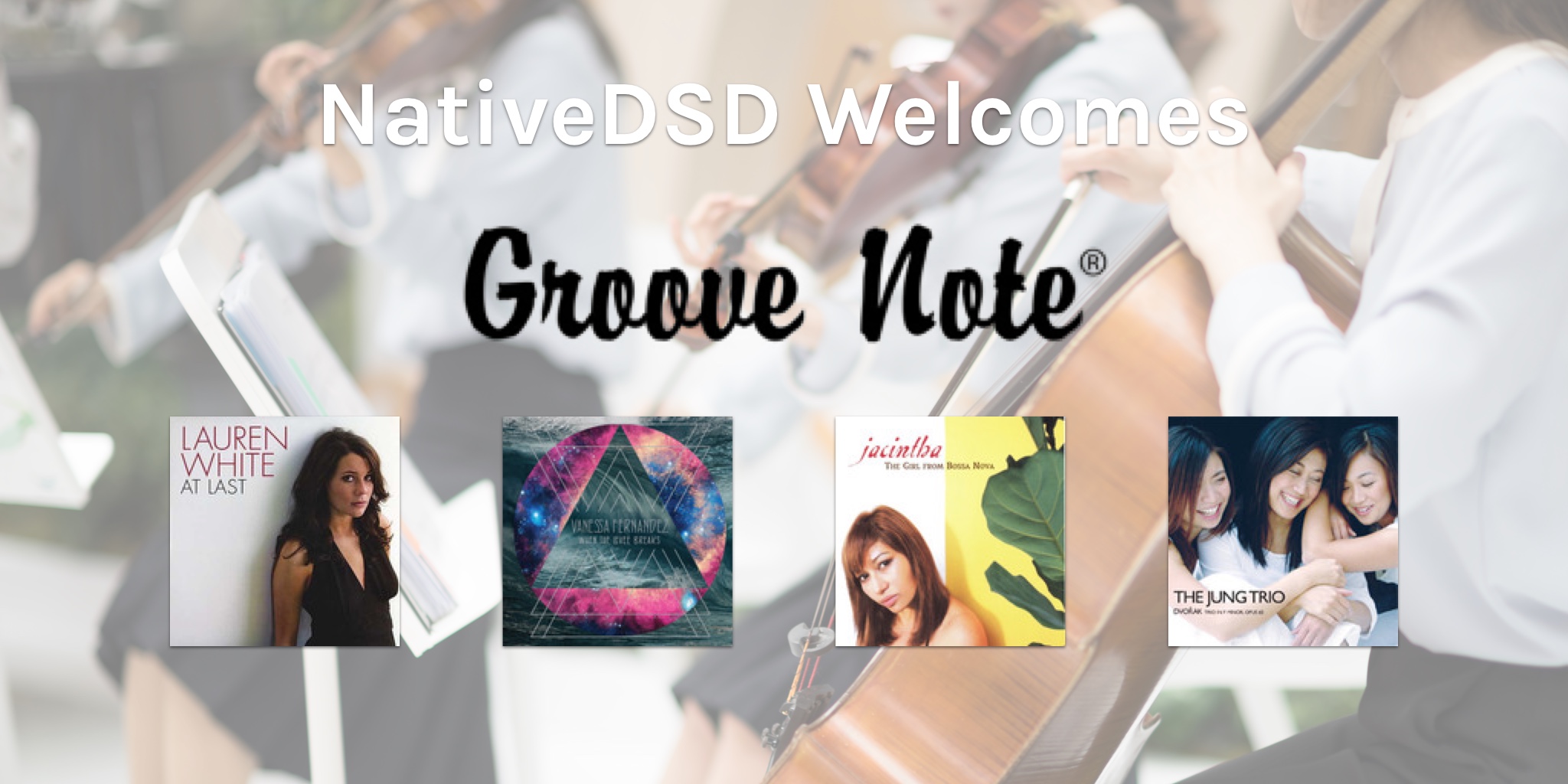 Here’s the story of how Groove Note Records and NativeDSD got to know each other, started collaborating and as a result… release the first four Groove Note DSD Albums at the NativeDSD Store today!

It started in irvine, where a well known high end audio distributor Philip O’ Hanlon from On A Higher Note was demonstrating some top shelf audio equipment that his firm was distributing in the U.S. With a state of the art analog and DSD system at an audio show in Irvine, California, sitting in the audience was Ying Tan of Groove Note Records – and two rows behind him – Jared Sacks, Managing Director of NativeDSD Music.

O’ Hanlon spotted them, walked over to NativeDSD Technical Advisor Brian Moura and whispered, “Have Ying and Jared met?” Brian said, “I don’t think so” and Philip raised an eye brow, walked over to both and did a quick introduction in the hallway. Ying and Jared had an extended chat and discussed the possibility of adding Groove Note to the NativeDSD Music store in the future.

A DSD Demo in Germany

Fast forward to the High End Munich audio show in Germany. Jared was demonstrating some of his favorite DSD releases from the NativeDSD Music store in an audio demo room that had a system that included the Playback Designs Analog to DSD converter designed by DSD pioneer Andreas Koch.

At the back of the room in walked a new listener. It was Ying Tan. After listening to the fine DSD music a bit and smiling, he approached Native DSD’s marketing guru Floor van der Holst, introduced himself and said it was time for Groove Note to bring its catalog to NativeDSD. Floor contacted Jared and the process began.

Today we’re pleased to announce the debut of Groove Note Records at NativeDSD. Groove Note features original Analog and DSD recordings in DSD Stereo and DSD Multichannel that feature Jazz, Blues, Vocal, Soul, Pop and Classical music. Each album features producers including Ying Tan and Joe Harley with engineering by Analog expert Michael C. Ross, mastering by Bernie Grundman at Bernie Grundman Mastering and Dave Glasser at Airshow Mastering and performances by some of the top session musicians based in Los Angeles. Groove Note has offices in Hollywood and Singapore.

To start things off, we’ve selected 4 DSD releases from the Groove Note catalog. But rest assured, there are more to come. With this release, it will be the first time these albums are available as DSD music downloads outside the United States and Canada markets.

Jacintha brings her fine musical styling to this warm and refreshing album of bossa nova favorites. In Multichannel DSD you will hear the singer’s vocals in the center channel speaker as a clear as a bell. The album delivers a wonderful listening experience.

Singer Vanessa Fernandez brings us a unique tribute to the music of Led Zeppelin in this interpretation of the group’s songs in an acoustic setting. It’s an Analog recording with rich detail and extended low end. In preparing this one for DSD release, NativeDSD Mastering Engineer Tom Caulfield remarked “I’ve never heard a drum kit sound like it does on “Kashmir”. It’s like I’m standing right next to the kit.”

On the analog recording At Last, Jazz Vocalist Lauren White performs some classics including Blue Bayou, Mack The Knife, My Funny Valentine, Superstar and Love for Sale. Accompanying White are Anthony Wilson (from the Diana Krall Trio) on guitar, bass player Chuck Berghofer and pianist Bill Cunliffe. Michael P. Gladstone from All About Jazz reviewed the album and asks, “With the appetite-whetting At Last, the only question is: what’s next?”

Moving to the world of Classical Music, Groove Note brings us The Jung Trio. This album was recorded Live, Direct to 2-track on 30ips analog tape. Reviewers have called it “One of the best sounding chamber music recordings that we’ve ever heard!” Stereophile’ s Michael Fremer says, “It was an ear-opener: the violin, cello and piano were reproduced with an appropriately rich darkness, three dimensionality, transparency, and verisimilitude that had me thinking: Can it possibly sound any better?”

We invite listeners to drop by the NativeDSD Music store and pick up some of these fine DSD releases from Groove Note. You will have some enjoyable musical moments ahead when you do.