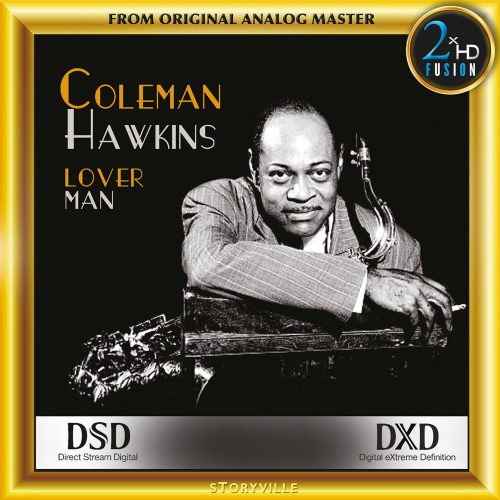 This is masterful tenor saxophonist Coleman Hawkins at the height of the swing era during the bop revolution.

Hawk is magisterial – composed, commanding but unostentatious here, breaking out occasionally into a flurry of notes and exhibiting a mature sense of dynamics. Hawkins is in fine form here, playing with typical visceral bravura. Playing, in fact, like the man who invented jazz tenor saxophone.

Lover Man is a Stereo Analog Tape to DXD and DSD Transfer from Rene Laflamme and Andre Perry at 2xHD Mastering.  The album was originally reissued on the Storyville Records label.  The Stereo DSD 512 edition was created by Tom Caulfield at the NativeDSD Mastering Lab using the Signalyst HQ Player 4 Pro mastering tools.

The story behind the 6 tracks

Mike Hennessey tells us the story behind the 6 tracks on Lover Man “The first four sides of this album capture the momentous meeting of four great iconoclastic jazz figures. It was a historic, magical moment when Coleman Hawkins, Bud Powell, Oscar Pettiford, and Kenny Clarke came together on the stage of the Grugahalie in Essen on the evening of April 2nd, 1960 and played for an Essen Jazz Festival audience of some 8,000 people. That audience was uniquely privileged because it was to witness the performance of some most inspirational spontaneous music from a quartet of jazz masters who were destined never to play together again.

Oscar Pettiford, one of the prime emancipators of the bass, died later that year; Bud Powell went to that great 52nd Street in the sky six years later. And three years after that, Coleman Hawkins was dead. A most precious recording, then – and it underscores yet again the gratitude that all jazz lovers owe to the people who ensure that such auspicious musical encounters are preserved on record.

The next two tracks are from a 1968 Copenhagen recording studio date, and once again, Hawkins has the blessing of a superb, tightly integrated rhythm section.

Lover Man is a classic among jazz ballads and Hawk gives it classic treatment. Kenny Drew plays a pretty introduction against Pedersen’s beautifully poised and rounded bass notes. Hawkins is in appropriately reflective and melancholy mood. Drew plays a most thoughtful and delicate half chorus with Heath and Pedersen, breaking up the tempo intelligently behind him, then Hawkins returns for the final half chorus with some more poignant musical observations.

Considering that this track and the following one, Sweet Georgia Brown, were recorded about a year before Hawkins died, his playing on both is remarkably resourceful and coherent. At the time he was an extremely sick man – yet, though not as tigerishly aggressive as he was at his peak, he attacks the familiar changes of Sweet Georgia Brown with great vigor. He uses the line on the tune which he recorded for Capitol in March 1945 as Hollywood Stampede.

The Rhythm section’s close rapport is undoubtedly enhanced by the fact that the trio worked as the house team in the Montmartre Club in Copenhagen at this period. Heath’s top cymbal is superb, Drew accompanies and solos with imagination and taste and NHOP is a constant joy.”

Although the performances are, for the most part, very good, the recording and mastering are not. Especially the final two tracks.

The first four tracks are live recordings, with all the challenges that brings. Hawkins’ saxophone is well captured, but the rest of the combo is not. The bass is muffled and garbled at times, and the piano and percussion sound like they are about 20 feet from a microphone. Disappointing to say the least. Especially considering the description of the conversion to DSD. No masterful transfer can make up for a poor recording in the first place.

The final two tracks are worse. They sound mono to me. The fidelity is questionable. The piano sounds like it was recorded in the pre-hifi era. I will never listen to these last two tracks again. Regret making this purchase. Not Recommended.