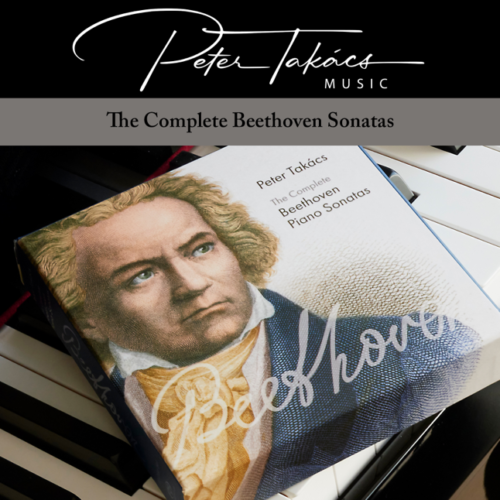 2022 Album of the Year – Solo Instrumental

The albums were recorded in 5 Channel Surround Sound DSD 64 by the Soundmirror Team at the Concert Hall of the Music and Mass Communication Department of Austin Peay State University in Clarksville, Tennessee in December 2001 through early September 2004. Peter Takacs played the Bösendorfer Imperial Grand Piano at the Concert Hall.

I’ve found them to be most engaging, well performed and nicely recorded. The performances are consistently well within the top ranks of performances one might find, and the sound quality exceeds that of most recordings available. Takács takes a middle road in his interpretations—consistently very solid, no excesses, and eminently satisfying. His playing style is very clean, supple and nuanced. And he can deliver power as called for. These performances were recorded in 2001-2007 by John Newton of Soundmirror, who knows what he’s about, and were originally released in 2010 as an eleven disc Stereo/Multichannel Hybrid SACD set on the Cambria label. By arrangement with NativeDSD, they are now available for download in both 5-channel and stereo in DSD64, 128, and 512.

NativeDSD Blog 5 out of 5

NativeDSD has many Beethoven Piano Sonata recordings available. Excellent Waldsteins, wonderful Moonlights, exciting Tempests, and heartfelt Pathetiques. It’s hard to go wrong with the most popular Sonatas. But what about all the others? What if I told you that there are superb performances, superbly recorded, of all the Piano Sonatas (along with a few extras) available now!

All 11 of Peter Takacs’ Beethoven albums are available individually, and in a money saving DSD bundle. I’ll let you read about the details of Peter Takacs life and performance history in the descriptions. What I’m anxious to tell you about is my reaction to this incredible group as a complete set.

Takacs is not an overly flamboyant pianist. He lets Beethoven speak for himself, yet I found absolutely nothing missing in these performances. The “greatest hits” sonatas are as fine as one could wish for, but what really impressed me is how much I thoroughly enjoyed all of the lesser known ones.  I kept thinking that each was like a totally new discovery, and each was something I would never want to be without.

Am I over-selling? I’m trying not to do that, but as someone who has enjoyed fine piano music all my life, I must tell you I am impressed.  And finally, the recordings are top-quality. Not too far, not too close, the perspective and clarity are absolutely perfect to my ears.  Make up your own mind, but the complete DSD set would be my first recommendation!

Peter Takács is a professor of piano at Oberlin College in Oberlin, Ohio. He was born in Bucharest, Romania and by four was taking music lessons and made his debut there at seven. When the family emigrated to France he was admitted to the Conservatoire National de Paris. In the United States he was awarded full scholarships to both Northwestern and the University of Illinois. It was with Leon Fleisher, with whom he maintains a close personal friendship, that he completed his artistic training at Peabody Conservatory. In addition to the usual one-on-one instruction, he gives master classes, adjudicates on music competitions, and concertizes in the United States and abroad, performing in solo recitals, chamber music and works with orchestra.

It is evident that Takács has become very close to Beethoven’s spirit, for these interpretations seem to come from within and not imposed on the score. These are not simply scholarly performances but fresh, compelling renditions by a scholar who has resolutely looked beyond the printed page. In addition to the 32 published sonatas, six extras are included: WoO 50 & 51 (1797/8); The Elector Sonatas WoO 47 nos. 1,2,3; and the sonata for piano four hands op.6 (1896/7) with Janice Weber, secondo. Plus, for good measure, the Andante Favori WoO 57. Thus, the collection is uniquely complete.

For me, Takács reveals qualities in these works that elevate them from piano pieces into musical narratives that engage the listener’s undivided attention and hold it beyond the very last note. I hated to stop any one of them or have my attention diverted in case I missed something. Even the shortest note or phrase has meaning. A poor simile but it may be like habitually viewing a sculpture from the same perspective and then seeing it from a new aspect… same piece but differently illuminated… an added dimension and a fresh appreciation of a familiar piece. Listening to these recordings aroused nostalgic remembrances of the wonderment and excitement of hearing these works for the first time. I do hope that Professor Takács will flavor us with some Schumann, played with equal dedication.

Audiophiles will be very excited with these albums  which are recorded in 5 Channel Surround Sound DSD 64 but are spot-on heard in Stereo DSD. The instrument is a Model 290, 9’6” Bösendorfer Imperial Grand and the recordings were engineered by Soundmirror, Inc. of Boston.

If you are a true audiophile – and chances are you think you might be if you visit these pages – then this set will be self-recommending. A magnificent recording in Multichannel DSD done on a wonderfully-mannered Bosendorfer and recorded at the Concert Hall of the Music and Mass Communication building at Austin Peay State University in Clarksville, Tennessee.

It is flat-out the most vividly captured set of the Beethoven sonatas on the market today, and might remain that way for some time. These are late bloomers, recorded 2001-2004, and DSD has changed somewhat since then, but you aren’t missing anything here. Peter Takacs is a noted performer and professor at the Oberlin Conservatory of Music, and this realization represents the fulfillment of a lifelong dream of his.

Period folks will shrink from this, and that is too bad. Of course the mere mention of a Bosendorfer is probably enough to put them off their food for a week, and that is a shame, for Takacs’s approach to these works, according to his own requirements set down in the notes, is one of the most rational and musical apologias I have heard. Following the dictates of one of his teachers, Leon Fleisher, Takacs says that one must go beyond mere historical and “timely” aspects of the music to get to the “wisdom of the material”, the “unspoken essence that lies beyond the notes.”

So are their revelations here? Actually, no, and that is not unexpected; after so many sets over so many years it is almost impossible to expect an artist to shed new light on these warhorses. What we look for now are performances that are heartfelt, clean, passionate, and in this case, with state-of-the-art sound. This recording has all of those.  I can see myself returning to this set very often because the sound is marvelous. If you love this music, and how can you not, you need more than one—make that more than two or t