George Gershwin is the soloist on the new DSD 256 “Rhapsody in Blue” recording! 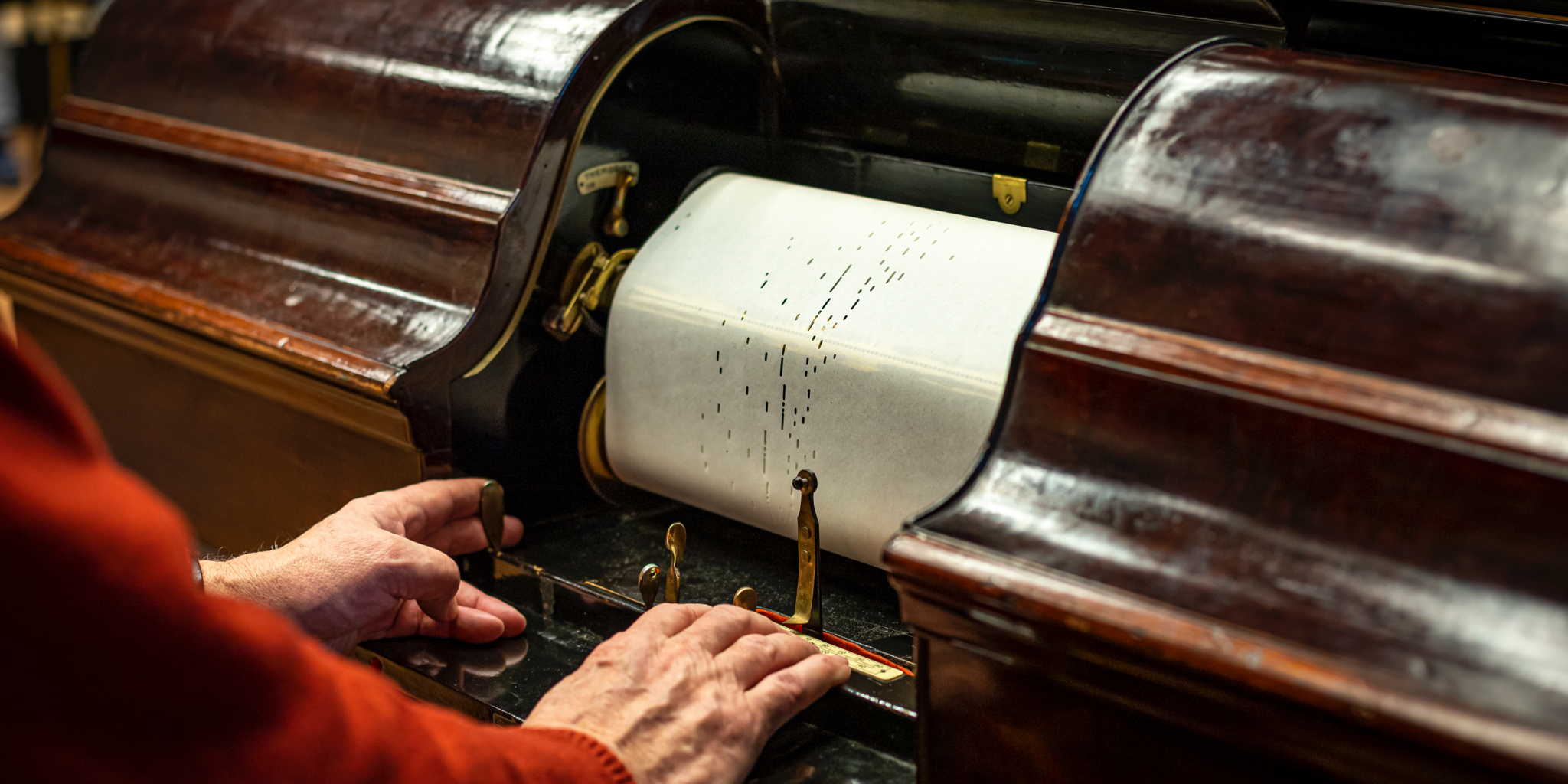 A piano roll made in 1925, featuring the composer as soloist, is used on this new recording of the Marine Band of the Royal Netherlands Navy.

Jan Bouman played the French horn in the Netherlands Philharmonic Orchestra. On the lookout for a new piano, he came across a pianola, a mechanical instrument with a reputation as a musical absurdity. As a professional musician he posed himself the question whether the pianola could be employed in a wide repertoire. In so doing he became quite captivated by this unique, late nineteenth-century invention.

The first pianolas were constructed as a separate fitting, later to be usually replaced by a permanent, internal mechanism. Together with their music rolls, they remained in production until the early 1930s. Considerable skill was required to transform music scores into mathematical patterns on the pianola roll.

Gershwin’s Rhapsody in Blue is heard on this album, performed by George Gershwin, with the aid of a separate fitting, made by the American Aeolian company. It is a remarkable apparatus: little felted levers, resting on the keys of the piano like the pianist’s fingers, are activated by the perforations in the music roll, which trigger small exhaust-valves linked to a wind reservoir in which a degree of under pressure is maintained by the player’s feet. The greater the under pressure, the louder the sound.

The operator, the pianolist, must acquire the proficiency of a pianist in terms of rapidity and refinement of touch. Most of the perforated rolls were executed based on sheet music. They are consequently in strict time, lacking tempo changes, rubato, and phrasing. The operator creates such nuance during the performance by means of the tempo-handle, a rod linked to the pedal of the pianola.

The music roll employed on this album is a registration of George Gershwin’s own playing. The timing and duration of the notes and the use of the pedal are therefore predetermined by him. But the pianolist, con-trolling the roll’s movement with his feet, determines the dynamics, including the accents, by treading more or less energetically. With his right hand he operates the tempo regulator and the dynamics of the high and low notes of the piano, while with the left hand he operates a little handle linked to the right pedal of the piano. Wrong notes are virtually ruled out. But at the same time, the instrument obliges the pianolist to devote full attention to a musically satisfying interpretation.

A piano roll made in 1925, featuring the composer as soloist, was discovered by chance. There was just one problem, however, for the roll comprised not only the solo part but also the accompaniment (piano) part. The 5,000 to 6,000 little perforations were sealed by Jan Bouman, and the result is nothing less than a revelation.

Gershwin proves to be a capricious soloist, and much more jazzy than present-day concert pianists, who often render a ‘romanticized’ version of the piece. Another surprise, and highly convincing too, are the THREE final chords of the first movement, which today are always omitted.

In the words of Major Arjan Tien: “We can now enjoy Gershwin’s interpretation on a piano roll of his own playing. Conspicuous is the enormous, extreme freedom that he takes with his own character directions such as meno mosso e poco scherzando, which is ‘outside’ the tempo and more like molto scherzando. The messa di voce (crescendo– decrescendo) too is pronouncedly interpreted as rubato rather than simply as louder and softer. What is more, he takes great liberty with the phrasing, sometimes on the verge of being unrhythmical, which for as accompanists was no mean challenge.”