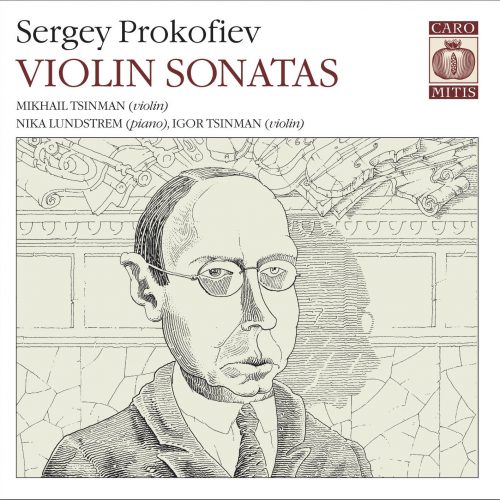 You treat these four sonatas as a single cycle. What is the nature of its unity, and why did you decide against ordering them chronologically in the album?
For musical reasons. The Sonata for solo violin is an introduction, followed by the powerfully tragic Sonata in F minor; next comes an intermezzo, the Double sonata, and the brilliant finale, Sonata in D major. Thus, the cycle has a general key, D major, and the contrast between its parts is very expressive. Each of the four sonatas has something in common, in images or intonations, with Prokofiev’s defining works in the genre of musical theatre. A stylistic change connected to the insight into the principal ethical task of creative work is the ballet “The Prodigal Son” and the Sonata for two violins; thinking about Russia’s historic destiny is manifested in “Alexander Nevsky” and “Ivan the Terrible”, in the operas “Semyon Kotko”, “War and Peace” and the epic First sonata; “Cinderella” and the Second sonata evoke fairy tales, and, finally, a number of “Soviet” pieces written on commission, which may include the Sonata for solo violin.

Some of Mikhail Tsinman’s comments about Prokofiev may strike you as odd, or oddly stated, but there’s no doubt he can play the fiddle and has the measure of Prokofiev’s music for the instrument.

This generously-filled disc would have something going for it even if the performances (with maybe a couple lapses) weren’t uniformly fine, which they are. Quite a number of discs featuring Prokofiev’s two violin sonatas include the composer’s Melodies, Op. 35bis, at twelve minutes’ duration, not a generous offering. Some recordings offer other tidbits—mostly arrangements of works originally written for orchestra—and some offer no fillers at all. So it’s a very attractive proposition to have all of Prokofiev’s Sonatas for the Violin collected on a single disc. And in highly atmospheric surround sound, no less. (But note that there’s an excellent budget alternative featuring violinist Andrey Bielov on Naxos 8.555904. Bielov includes all three sonatas for single violin but not the Sonata for Two Violins; substituting Op. 35bis instead).

The current performances are by what must be a rare trio of among musicians, at least operating at this level of professionalism: father Mikhail Tsinman, daughter Nika Lundstrem, and son Igor Tsinman. Mikhail is concertmaster of the Bolshoi Theater Orchestra and violinist with the Moscow Rachmaninoff Trio, so he’s undoubtedly had much first-hand experience with Prokofiev’s music for both the theater and chamber ensembles. This is evident from the booklet notes, which include a series of rather strange ruminations in the form of answers to interview questions posed to the violinist. Or maybe they’re just strange to a Western reader. And they are interesting, getting into the issue of Prokofiev’s surprising religious affiliation (with Christian Science) and the broader picture of the metaphysical in the composer’s life and works.

As one might expect, these ruminations include a number of references to Prokofiev’s works for the theater, the most interesting idea being that the violin sonatas have connections with the composer’s last ballet for Sergei Diaghilev and his Ballets Russes, The Prodigal Son (1928–29). In his diary Prokofiev opined that the theme of a work based on a Gospel parable should “come from above.” Concerning this observation, Mikhail Tsinman says, “The music of ‘The Prodigal Son’ is the beginning of a stylistic change, whose grand results will have matured in Russia. Ever since this time, the idea of eternal blessed existence is central for Prokofiev’s art.” A pretty heady statement, but I won’t take exception to it. However, Tsinman’s connecting the ballet with Prokofiev’s Sonata for Two Violins seems like a very personal interpretation: “Its [the sonata’s] first theme comes down from the heights like some ideal principle, and, reaching the lower register (‘the material’), stumbles upon a dissonance, the second G – A flat. An error!. . . The sonata was written in 1932 for Paris, but its first performance was in Moscow. I think that was one of the milestones on the road from The Prodigal Son to Prokofiev’s own return to Russia. And the Russian theme of the Sonata’s finale is perceived as something idealistically native, enticing as that field of rye. . . .” As I say, a very personal, and rather strange, take on things.

But as Tsinman goes on to say in his comments, it was not all “ideal principles,” all sweetness and light, that informed the works Prokofiev wrote after his return to Russia, and that includes the First Violin Sonata in F Minor—a key often associated with darkly passionate emotions. The sonata took a remarkably long time for Prokofiev to complete: he started in 1938, finishing the work in 1946. It was immediately received as a masterwork by violinist David Oistrakh, who gave the debut performance, and Prokofiev’s colleague Nikolai Myaskovsky. Since then, the sonata has tucked itself firmly into the repertoire of violinists. Beginning with a ruminative movement marked—very unusually for a first movement—Andante assai, the work seems to have very little of “ideal principles” about it; it’s (quietly) anguished; angry; and finally, life-asserting, though some of the earlier-expressed angst hangs over the relatively upbeat finale.

Prokofiev took so long to complete the First Sonata that the Second was started and finished long before the ink had dried on the First. The Second Sonata was written between 1942 and 43 during a removal from Moscow (imposed by the Soviet government for Prokofiev’s own safety) to the city of Perm, in the hinterlands of the Soviet empire. It doesn’t seem to have any direct references to native folk melody, as does the Second String Quartet of 1941, written while Prokofiev was living under similar circumstance in Kabardino-Balkaria; but the sonata has a folk-like simplicity and immediacy lacking in the sober First Sonata. Also, the Second Sonata was originally scored for flute, which may account even more for its neo-Classical lightness of texture and mood. In 1943, at Oistrakh’s bidding, Prokofiev re-scored the work for violin and piano, and it’s in this form that the piece is most often heard. This is another fine performance mostly, but the Scherzo would definitely benefit from more lightness and éclat.

Finally, we have the Sonata for Solo Violin, written in 1947 to honor the thirtieth anniversary of the October Revolution. It apparently uses “Russian motives” and was conceived as a piece to be played by young musicians—Prokofiev initially hoped this would be an ensemble of violin students. Despite the nationalistic gestures and obeisance to the important Soviet aim of enculturating Russian youth, the work didn’t ward off the 1948 attack on Prokofiev (and other prominent Soviet artists, including Shostakovich) as an anti-democratic elitist. I can’t buy into interviewer Michael Serebryanyi’s observation that the Solo Sonata is a “full-blown parody. Mocking through clenched teeth and through tears.” But it is emotionally more equivocal and thus more challenging than the kind of “youth” works that Kabalevsky produced around the same time. Like the others of Prokofiev’s violin sonatas, it needs a seasoned performer to do it full justice.

Which brings us to the performances on the current CD. It’s true that none of the musicians has star status, but they bring something just as important, a highly idiomatic approach to music that is their birthright. But besides a certain inside track in terms of cultural understanding, the Tsimans are truly accomplished musicians for whom these works offer no exutant challenges. And since these performances strike me as sensitive, alert, and interpretively on-point, I’m happy to recommend a recording that represents not only high performance and production values, but great value, period.

I was really impressed with the first spate of releases from the Russian label Caro Mitis. A long hiatus followed, and I was worried that another fine label had fallen by the wayside. But I see that new releases are appearing once again—good news for music lovers generally and audiophiles in particular.