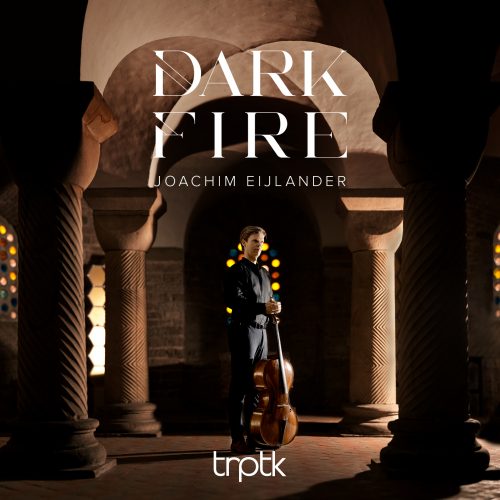 After 3 releases on the Navis Classics label (also available from NativeDSD), cellist Joachim Eijlander returns to NativeDSD Music with Dark Fire, his first album on TRPTK. Dark Fire is said to be “an encounter with the realms of other people’s experience, principally those of musicians. When two energies meet for the first time and are fully open to the experience, a new mirror image of themselves they have never seen before will arise.”

Eijlander says “Philosopher Martin Heidegger (1889–1976) described the encounter between the organized philosophical world of the ancient Greek and the mystical, abstruse world of the East as a dark fire. This would have caused the enlightenment in Greek poetry.

It’s unclear what Heidegger really thought about it, but I found the mental image of a dark fire lit by this chance meeting beautiful and highly inspiring. For Heidegger, this was mainly about the East and West.  To me it’s about an encounter with the realms of other people’s experience, principally those of musicians. When two energies meet for the first time and are fully open to the experience, a new mirror image of themselves they have never seen before will arise.”

This album by cellist Joachim Eijlander is, like the Paper Motion set, another TRPTK release, which means it’s also heavily annotated when it comes to the equipment employed in the recording process. But it couldn’t be much more different in style and approach.

It’s one of those ‘musical cultures meet‘ projects, the cello being joined by guitar, piano, accordion, and duduk. Yes, I had to look it up too: it’s an Armenian double-reed woodwind instrument made from apricot wood. It’s OK, you can thank me later.

Anyway, the pieces here are unfamiliar, but both the performances and the recorded sound, placing the instruments in an atmospheric church acoustic, are excellent, with Sulkhan Tsintsadze’s ‘5 Pieces On Folk Themes’ especially attractive in making use of the varied instrumental textures on offer. It’s a slow burner, to be sure, but one well worth exploring.

Dark Fire, TRPTK’s new DSD album of solo and duo works for cello, brings the immediacy and excitement of a house concert into your listening room. A house concert is a great way to hear live music. The barrier between performer and listener is removed. Audience members can talk with the players, meet the composers, and become acquainted with works that do not often appear on mainstream concert programs. The musical performances on “Dark Fire” recreate the house concert experience.

For this album, cellist Joachim Eijlander selected a group of early-20th century works for solo cello, and cello duos with duduk (a double-reed instrument of Armenian origin), guitar, accordion, and piano. The range of the cello extends from deep, guttural low notes to a supple high register, offering composers a broad spectrum of sound for creating unaccompanied works. The template of solo cello compositions was perfected by J.S. Bach, whose unaccompanied suites for cello still challenge students of the instrument. In the 20th century, the rediscovery of Bach’s cello suites paralleled the development of new solo works for the instrument.

Joachim Eijlander opens “Dark Fire” with Saygun’s “Partita for Solo Cello”. Threaded with folk themes and Near Eastern scales that convey the traditional culture which Saygun aimed to preserve, it also belongs to the musical world of Saygun’s teacher, Vincent D’Indy, and the great French composer Claude Debussy.

This was my first exposure to Saygun’s music. Something magical happens when hearing a new piece that doesn’t imitate other works yet feels familiar. Eijlander reveals deeper layers of emotion and meaning that made an impact on this first-time listener.

Two short duets for cello and duduk, played by Eijlander and Kadir Sonuk, complete the first part of the program. The duduk’s voice-like tone resonates with the antiquity of its 5th-century origins. Eijlander writes that playing with Sonuk encouraged him to improvise; you can hear him stretch out beyond the written notes.

The next solo work is Gaspar Cassadó’s “Suite for Solo Cello” from 1926. The Spanish cellist and composer Cassadó enjoyed a long and successful career, from his early student days with the cellist Pablo Casals, to his close friendship and musical partnership with the preeminent interpreter of Spanish piano music, Alicia de Larrocha. The Suite is one of Cassadó’s most popular and enduring works. Under Eijlander’s bow, it sings, springs and glides through three delightful dance-form movements.

Guitarist Izhar Elias is the partner in two duets by Cassadó. The guitar’s range overlaps that of the cello, making for a dialogue in similar registers. Elias brings out the Iberian soul of these works, especially in the melancholy “Lamento di Boabdil”. Balance between the two players is skillfully managed by engineer Brendon Heinst. The Spanish portion of the program now concluded, Eijlander dazzles us with a virtuoso performance of the showpiece “Toccata for solo cello” by the Georgian composer Sulkhan Tsintsadze.

The final portion of the program transports us to Soviet-era Georgia, the musical landscape of composer Sulkhan Tsintsadze. Like Cassadó, Tblisi-born Tsintsadze was a performing cellist, and a prolific composer of chamber music, symphonies, concertante works, and film soundtracks.

The five pieces by Tsintsadze are firmly rooted in 19th-century tonality, with branches that enfold the song forms of the composer’s homeland. The seamless interplay of Eijlander with pianist Helena Basilova and accordionist Vincent van Amsterdam in these brief works leaves the listener with a desire to hear more by these exceptional artists.

Credit for the high quality of this release belongs not only to cellist Joachim Eijlander and his duo partners, but to TRPTK engineer and label chief Brendon Heinst, and to his partner in this venture, executive producer Gilles Stoop. A music lover and audiophile, Gilles Stoop took the next step of musical patronage beyond attending performances, to organize house concerts in his home and support the production of albums on the TRPTK label.

After the opening piece, the Cellopartita by Ahmet Saygun, you may still have doubts. What kind of gruff, introverted music is this?

Joachim Eijlander, former cellist of the Rubens Quartet, is not a pleaser. Still, Dark Fire is a strong album. In terms of sound and style, there is a lot of variation and surprise, Eijlander’s tone is alternately tender and dangerously rough.

The title comes from the philosopher Heidegger, who used it to describe the meeting between Greek antiquity and the ‘mystical’ East. Eijlander previously recorded Bach’s cello suites. Now he opts for collaboration.

He accompanies duduk player Kadir Sonuk in traditionals, such as the enchanting Hiçliğe yolculuk (‘Journey to nothing’). With master guitarist Izhar Elias, Eijlander plays a wonderful lament by Gaspar Cassadó, whose dance Cello Suite is the best-known work on the album. Pianist Helena Basilova and accordionist Vincent van Amsterdam participate in compositions by Sulkhan Tsintsadze – melancholic, rattling, uplifting, folk-like and of course dark and firey.

The Dutch cellist Joachim Eijlander dares to leave the beaten path of Bach. He has already proved that he can play Bach excellently. His new project is called “Dark Fire” and that title refers to a statement by philosopher Martin Heidegger. He described the meeting between the philosophical world of the ancient Greeks and that of the mystical East as “dark fire”. Eijlander ignites that dark fire on an album that – of course – travels to the East. On the cover Eijlander is depicted in mysterious light between Moorish-like pillars.

The album opens with low-roaring drones in a five-part Partita for solo cello by the Turkish composer Ahmed Adnan Saygun. His partita is an infectious piece, beautifully played with virtuosity. We are then in Azerbaijan for traditional music, which Eijlander performs with courage together with duduk player Kadir Sonuk. The cellist improvises beautifully along with Sonuk.

From the Spanish cellist and composer Gaspar Cassadó we hear a suite for cello solo, and two pieces that Eijlander plays with guitarist Izhar Elias. The Arab influence is clearly audible. Alternately with accordionist Vincent van Amsterdam and pianist Helena Basilova, ‘Five pieces on folk themes’ by the Georgian Sulkhan Tsintsadze will be played. Rich and varied repertoire beautifully brought together and beautifully performed. 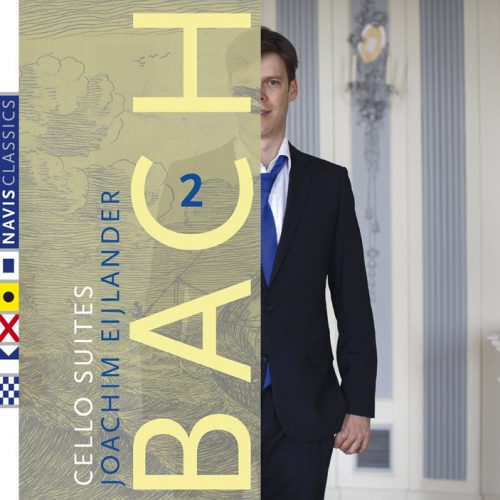 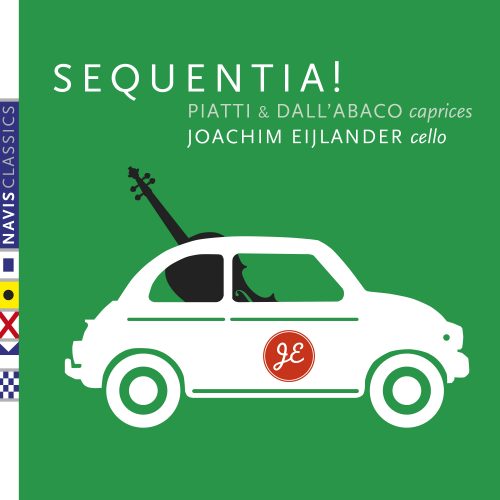 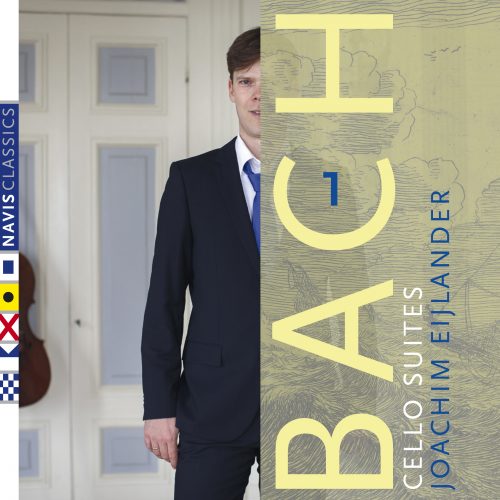 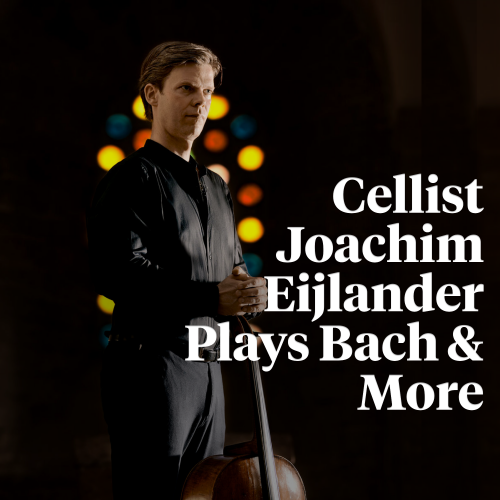