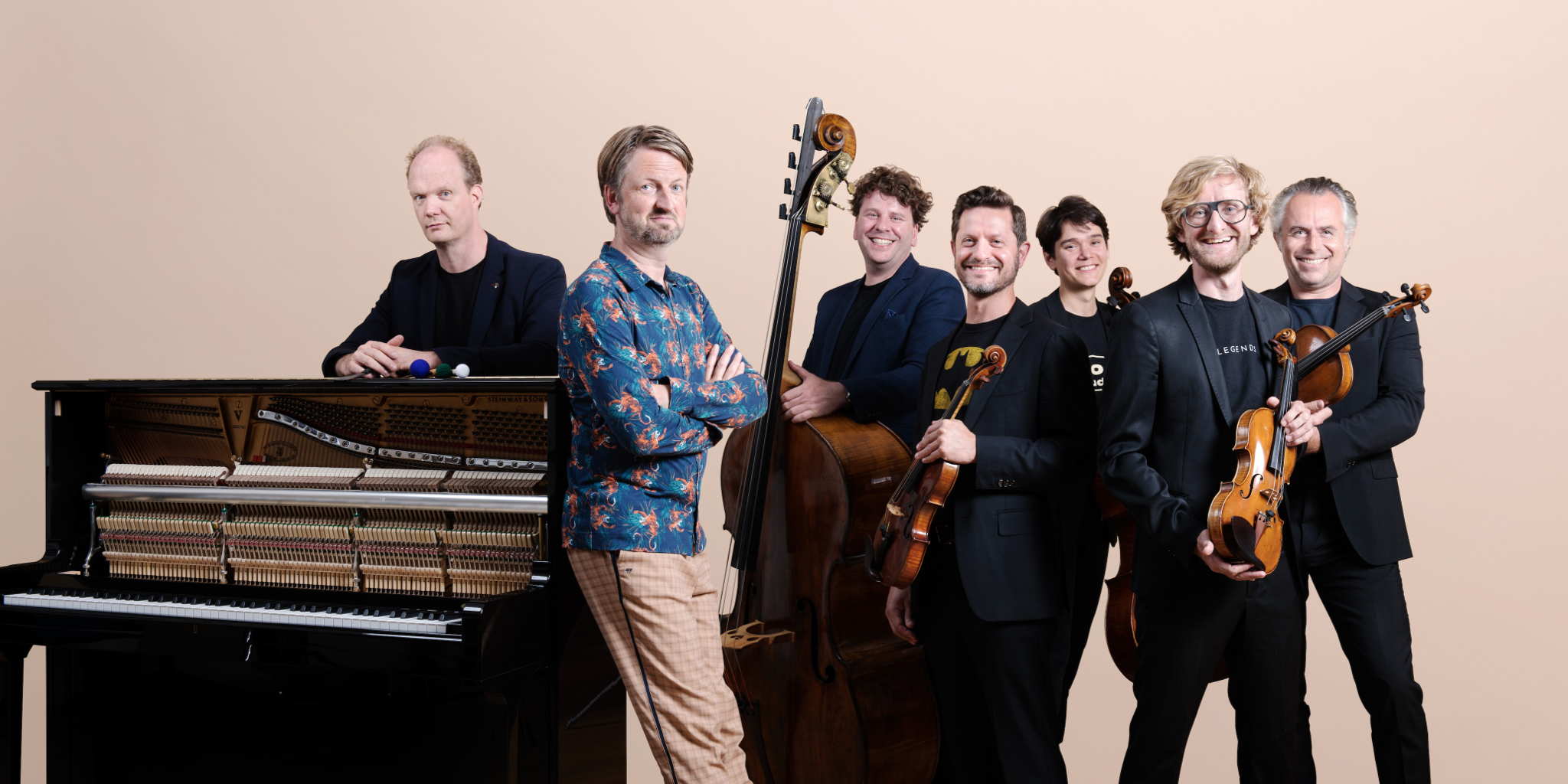 Frerichs’ Piano Concertos Nos. 1 & 2 are performed by the Alma Quartet, Dominic Seldis (members of the Royal Concertgebouw Orchestra), Vinsent Planjer and of course Rembrandt Frerichs himself on piano.

Pianist Rembrandt Frerichs has made a considerable name for himself in the Dutch music scene. He makes exciting connections between world music, baroque and classical music. Rembrandt Frerichs already came into the spotlight through composition commissions from leading musicians, including Liza Ferschtman and Amsterdam Sinfonietta. His star is rising further now that musicians of the Royal Concertgebouw Orchestra have asked him to compose a brand new piano concerto. He introduced the fortepiano in the high-profile production ‘The Contemporary Fortepiano’ on Just Listen Records. Now, on a modern Steinway, Rembrandt Frerichs has recorded his own Piano Concertos Nos. 1 & 2, in which the orchestral score is composed and the solo piano and percussion parts are improvised.

Frerichs seizes every possible musical adventure with both hands, and it is therefore no surprise that he was commissioned by viola player Michael Gieler of the Royal Concertgebouw Orchestra to write a piece for his ‘IJ-Salon serie’, a place where one can experiment to one’s heart’s content and break down musical barriers.

It is a logical consequence of his artistic choices over the past decade that Rembrandt has come to be known as a forward-thinking free spirit for musicians who want to break out of the confines of their professional practice. In his projects, he makes every effort to test both his own limits and those of his fellow musicians. On this album this can be heard, for example, on the track “Finale,” where the strings are plunged into a rhythmic world not yet common to classical musicians.

Composing this music felt like an invitation to the most fun playground and working with these musicians was such a nice coming together of energy.

Together with the Alma Quartet (string players of the Royal Concertgebouw Orchestra), double bassist Dominic Seldis and his regular percussionist Vinsent Planjer, Frerichs took an entirely new and unexpected path. He brought the improvisational element back into classical music, a practice that was common in the time of Mozart and Beethoven. Some composers only wrote out the orchestral score and came up with their solo part during the performance. Frerichs follows that pattern in his first two piano concertos. He uses a ‘black page’ with prescribed notes for the strings and allows himself to be inspired by the moment from a ‘white page’ together with percussionist Planjer. The musical imagination is given free rein and because of this unusual starting point, each performance will be different.

Rembrandt: “For a long time it was unclear how the concert would sound in its entirety. The string players didn’t have a picture of the embedding of the piano yet. At the rehearsals I would say something like: I’m going to do something here, but what that is I’ll figure out during the concert. The penny didn’t drop until we played for an audience for the first time at the Oranjewoud festival and the musicians heard the piece in its entirety. You could truly read on their faces, ‘Aaaah so this is what he meant…’ That moment can be heard during the second movement of the piano concerto no. 2.”

Frerichs’ piano concertos provide listeners with a freshness and spirit of renewal, like we found in the works of pioneers from the beginning of the last century: Ravel, Debussy, Gershwin, Bartók and Stravinsky. We also hear many elements from jazz, such as an infectious sense of timing and groove, and the linear improvisations of the legendary Lennie Tristano.

Composer and pianist Rembrant Frerichs shared his feelings towards this recording, and why it is special to release it in DSD:

“Dear DSD & DXD listeners,
It is a pleasure to bring you my new album at NativeDSD Music! Composing this music felt like an invitation to the most fun playground and working with these musicians was such a nice coming together of energy. Having it recorded in such an incredible high resolution means that the music really sounds as good as it can, it actually sounds precisely the way it did when we played the music during the recording session. I hope you will enjoy listening to these compositions, the recording and the interpretation.“

To celebrate Frerichs’ spectacular new release, NativeDSD is offering its customers 25% off all of his earlier works.

David is NativeDSD’s Product and Communication Manager. He grew up writing songs, playing guitar and drums. Working with musicians in studio to produce records as a recording engineer and producer, he produced music for numerous commercials for Pulse Content, and organised numerous music events and concerts.