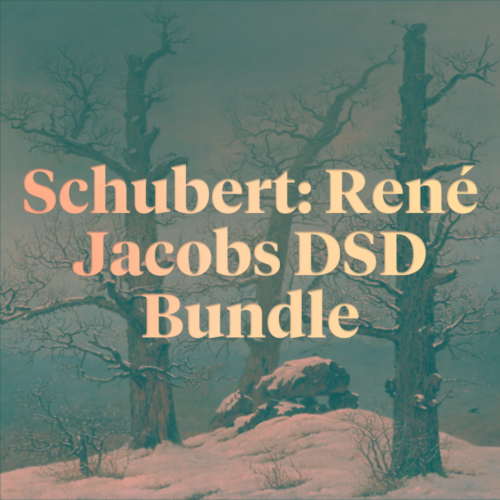 This is a DSD Bundle of the complete DSD cycle of Schubert symphonies with star conductor René Jacobs and the dynamic Belgian period instrument ensemble B’Rock Orchestra. This ambitious new project marked René Jacobs’ and B’Rock’s first collaboration with Pentatone, and was recorded from October 2018 to July 2022.

NativeDSD Bundles are a mini collection of DSD albums created by the NativeDSD team that brings the works of a special artist, music label or musical genre to your personal library. Better yet, when you buy all of the albums in a bundle (in this case 4 albums), NativeDSD gives you a special 30% OFF discounted price on the full bundle. Expanding your musical horizons and collection while saving money at the same time.

Each DSD Bundle is a music opportunity and adventure we urge you to explore.

Symphonies 1 & 6
With this recording, Jacobs and the B’Rock Orchestra lift out the maturity and depth of these two early works. Whereas the First has a more classical, bubbly quality, the Sixth shows Schubert’s inclination to musical Romanticism. At the same time, these symphonies have much in common: both display humour and joie de vivre, with “carnivalesque” allusions to early nineteenth-century Italian opera, but behind the happy façade lies a deeper layer, full of melancholy and bitterness. In that respect, these works fully capture Schubert’s personal life: that of a social, lively man, plagued by the knowledge of his fatal illness. They are performed on period instruments, transparent, but full of fire.

Symphonies 2 & 3
Jacobs approaches these pieces as a symphonic pair revealing contrasting aspects of Schubert’s personality and compositional approach. The former being serious, ambitious, aiming to “outdo” Beethoven, while the latter is deliberately un-heroic: light, lyrical, and full of Italianizing elements.

Symphonies 4 & 5
The Fourth is Schubert’s first symphony in a minor key and adumbrates a new harmonic worldview that Dvořák associated with Wagner’s Tristan und Isolde. On the contrary, the Fifth sounds Mozartian and cheerful, although that light-heartedness is only an appearance, as is so often the case in Schubert’s music. In the composer’s words, “too light a mind usually harbors a heart that is too heavy!” Looking closer beneath the surface, the cross-relations between the “Tragic” Fourth and “lighter” Fifth become more evident.

Unfinished & Great Symphonies
In his extensive liner notes, Jacobs develops a theory that the B Minor Symphony did not remain “unfinished”, but was deliberately left unfinished, because Schubert shaped its two movements in analogy to Mein Traum (My Dream),  an autobiographical narration in two parts, written in 1822, simultaneous to the creation of the symphony.