The Nederlands Saxofoon Octet (Dutch Saxophone Octet, in short NS8) was founded in 2014 in Amsterdam by a group of recently graduated saxophonists. They wanted to go beyond the standard saxophone quartet and decided to form a saxophone octet. With a sopranino and a bass-saxophone, and all sorts of saxophones in between, the ensemble has a wide range that allows interesting adaptations to a range of music, varying from chamber music to symphonies. NS8 received permission from the Schönberg Foundation to adapt and perform Schönbergs Verklärte Nacht.

The NS8 also collaborates with composers of contemporary music. They premiered Via Dolorosa from Bernard van Beurden and collaborated in a grand project celebrating the twenty-year anniversary of the Guggenheim Museum in Bilbao. In the Netherlands, NS8 has performed in TivoliVredenburg, the Concertgebouw in Amsterdam and Muziekgebouw Eindhoven. They have appeared as guests at various festivals including the Grachtenfestival, Wonder-feel, Mañana Mañana, Uitgast, Cityproms, the Oranjewoud Festival, and Festival Classique.

One of the first pieces that the octet played was of Simeon ten Holt’s Canto Ostinato. Saxophonist Stefan de Wijs created the arrangement and received the approval of the descendants of Ten Holt.

‘Playing Canto Ostinato can’t be compared with playing any other piece of music’, says NS8-member Dineke Nauta. ‘It requires special concentration and openness. That doesn’t come easy, especially in the beginning, but the more quintuplets you play, the faster they come to you. When you get it, the piece will fly by and you have the feeling you can play for hours.’ Colleague Nina van Helvert: ‘Compared to the original Canto Ostinato, our Canto has far more opinions than when you play it with four pianos. Furthermore, each player brings his or her own personality and color. Together, we form an organic machine with components that communicate closely with each other. At one time everybody follows an initiative in articulation or dynamics, at another time, one player goes solo against the rest. But each time it goes forward, and then it retreats; it builds tension, and then it releases. In eternity.’

‘It was a big effort’, says arranger Stefan de Wijs about adapting Canto Ostinato for eight saxophones. ‘It’s not a ‘normal’ score you can arrange across the page from left to right. The beauty of playing Canto is that not all is set in stone when you perform, but when you arrange the piece you just have to define it. The trick is to arrange it in such a way that many options remain open. In the end, the arrangement was finalized during the rehearsals. And when I hear it played now, I think, even though it says: ‘Arranged by Stefan de Wijs’, it is just as much arranged by the octet. I wrote the notes, but NS8 made the choices.’ Canto Ostinato with eight saxophones sounds completely different from Canto with four pianos, says the arranger. ‘The timbre of a saxophone differs radically from that of a piano, changing the perception of the sound’. That’s why he needed to make many adaptations to the original score, but, he says, ‘I maintained the tonalities.’ 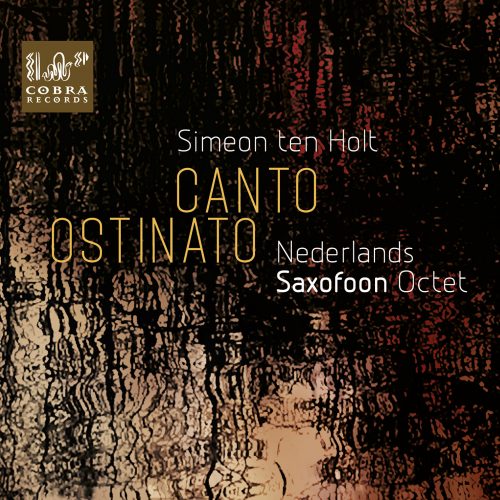