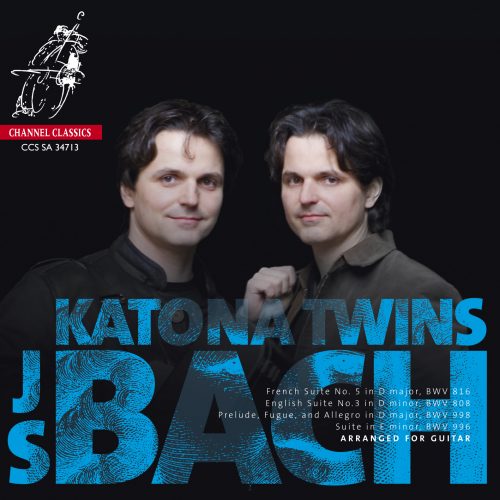 On this disk we recorded two duets and two solo works by J.S. Bach. The duets were originally composed for the harpsichord and the solo pieces for the lute. Because of the complexity and difficulty of lute works, many support the idea that these works were written for an instrument called the “Lauten werck” or lute-harpsichord (a small harpsichord with a similarly shaped body to that of a lute). We know that Bach possessed at least two of these instruments, according to the inventory of instruments made at his death. He was also in contact with one of the most famous lutenists of the time: Sylvius Leopold Weiss, whose acquaintance might have contributed to the emergence of these works for lute.The English and the French suites are both a set of six suites, from which we chose the French Suite No. 5, BWV 816 and the English SuiteNo.3, BWV 808. The names French and English were given after Bach’s death and have, if anything more to do with French style lute and keyboard music, than with the English baroque style. To add to the confusion theCourante in the fifth French Suite is Italian with a rapid triple meter and not French.The English Suites might have been composed for an English nobleman(although there is no substantial evidence to support this) but they all start with a Prelude, which has more affinity with French music (with the difference that Bach’s Preludes are composed in strict meter).J.S.Bach: Prelude, Fugue and Allegro, BWV 998: Because of its unusual three movements the “Prelude, Fugue and Allegro” is a highly controversial work. Bach wrote many preludes and fugues but this is the only one with a third movement, an Allegro, attached. Some are of the opinion, that this isa fragment from an unfinished bigger work. There is a group of musicologists however, who believe it to be a work, composed towards the end ofBach’s life with a theological message and the number 3 at its core. There is another Trinitarian work by Bach: the “Kleines harmonisches Labyrinth”(BWV 591) which existence strengthens the argument that Bach was applying theological aspects to the Prelude, Fugue and Allegro.There is no autograph by Bach for the Suite in e-minor, BWV 996 and the primary source is a copy by Johann Gottfried Walther and another one made a couple years later by Heinrich Nikolaus Gerber, who was a student of J. S. Bach.The E minor Lute Suite is composed just like the traditional Froberger keyboard suite model (four basic dance movements allemande, courante,sarabande, and gigue) to which Bach added a florid Passaggio (a prelude whose origins are to be found in the improvised introductions to organ toccatas) and a lively Bourrée.

(…) it’s pure quality. This is a thoughtful, balanced, and beautiful recording, where everything seems to stand in the right place. (…) Overall, the playing is technically excellent and effortless (…) The two brothers play with care and confidence, with expressive intonation, letting Bach’s wisdom shine through. (…) the recording quality is very good, full and friendly. (…)
Amazon

The Katona Twins have been called the world’s best-known classical guitar duo. Their technique is fabulous and with the excellent hi-res surround offered by Channel Classics, this becomes a wonderful album for music lovers, even those who may look askance at Bach arrangements. (…)

(…) The Katona Twins, the Hungary-born brothers Peter and Zoltan, bring an effortless virtuosity and pleasantness in these transcriptions of Bach’s music. The sound of a harpsichord and a guitar do not even differ that much, which make these performances very naturally.

“The Katona brothers’ arrangements of a selection from Bach’s English and French Suites (originally for clavier) are rather novel and quite illuminating. (…) This is a highly desirable disk of Bach’s music, played with freshness, elegance and wit. It sports many attractive tone-colours to add to the entertainment.”