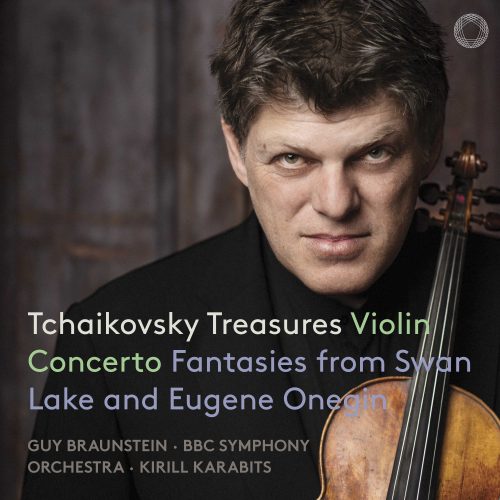 Tchaikovsky has dedicated some of his finest music to the violin, but this new album expands the instrument’s repertoire even further. Inspired by greats such as Sarasate, Heifetz, Kreisler and Joachim, violinist Guy Braunstein reanimates a tradition of violin and orchestra rhapsodies with new arrangements of famous excerpts from Tchaikovsky’s Eugene Onegin and Swan Lake. Together with the extraordinary Violin Concerto, Valse Scherzo and Sérénade mélancolique, they constitute a collection of glittering Tchaikovsky Treasures.

“Why compose violin and orchestra rhapsodies after Tchaikovsky’s opera and ballet music? It all started because of jealousy… A few years ago, I was conducting Eugene Onegin. While rehearsing the Letter Scene, I found myself envying Tatjana so much. I just couldn’t help it. I ran to my hotel afterwards, took out the violin and started playing Tatjana’s part. Then again. The next day I modified it and started making it suitable for virtuoso violin. I remember that the great Leopold Auer did that with Tchaikovsky’s music. After all, he was the dedicatee of all Tchaikovsky wrote for the violin. So I went to work on the Letter Scene, the Lensky Aria (which Auer himself transcribed for violin and piano) and finally the “pas de deux” scene from Swan Lake. The result is three pieces of Tchaikovsky’s music that are totally new in the violin literature. In the golden era of the violin, Sarasate did such things. So did Heifetz, Kreisler, Joachim; all the greats. They felt the urge to enlarge the repertoire by composing, transcribing and arranging. In the last decades, performers rarely do that anymore. I try to follow their great tradition.”

Guy Braunstein belongs with this album, with his intense violin playing and his inexhaustible sonic fantasy in a row with the very big violinists. Without overestimating itself.

For more than ten years, the Israeli violinist Guy Braunstein was First Concertmaster of the Berliner Philharmoniker. In 2013 he gave up this position in favor of a solo career. The Berlin-based choirmaster has just recorded the violin concerto by Peter Tchaikovsky, as well as his own rhapsodies on topics that Tchaikovsky composed for his opera “Eugene Onegin” and for the ballet “Swan Lake”.

“I try to get into the composer’s head,” says Guy Braunstein, “and take a good picture of the mood and the face he shows.” In his Violin Concerto Tchaikovsky shows at least three faces: a melancholic, a classical and a folkloristic.

Tchaikovsky unites all three in one of the greatest violin concertos of the 19th century. “He jumps from one to the other, so organic and so homogeneous, like almost no other composer.”

Born in Tel Aviv in 1971, Guy Braunstein plays Tchaikovsky’s music with an energy that can be felt in the direct surroundings of the musician like a strong force field. On the stage and also in the recording studio, Braunstein lets his enormous physical presence flow over the bow into his Ruggieri – an instrument from 1679, with very special qualities. “With this instrument, all I have to do is think what sound I want for a particular spot, and then the instrument produces exactly what I’m looking for.”

In Tchaikovsky’s Violin Concerto Guy Braunstein can play all his virtuosity, embedded in the colorful orchestral sounds that form the BBC Symphony Orchestra.

Kirill Karabits is the ideal conductor for this music, says Braunstein, who calls the Russian conductor his “musical twin brother”. “He understands this music just like me: light and yet powerful, sparkling but not bombastic, melancholic but not schmaltzy.”

“The Canzonetta,” explains Braunstein, “is where everything comes from the first clarinet solo, the woodwind chorale, the mood that they have produced for me, I have to continue, but now alone.” And this loneliness walks through the first topic. Of course, we do not know who was the subject of Tchaikovsky’s love, but that’s a love song! ”

The slow movement is followed by the rapid finale of the Violin Concerto. Actually, this would already be the highlight of the album. But in the program of the album, the concert for Braunstein is just a point of reference, a “reference”. Because now follow three own rhapsodies on topics of Tchaikovsky. In it, Braunstein again increases expression and virtuosity. “This” Pas de Deux “starts with a waltz and then comes the” Black Swan. “This is originally composed by Tchaikovsky for Leopold Auer as a concertmaster, a great violin solo. This is how I took the first 16 bars of this solo, as it is in the original – after that, I let go of my imagination over these 16 bars. ”

By “letting go of his imagination”, Guy Braunstein follows famous role models, placing himself in a line with the very great violinists: Fritz Kreisler, Joseph Joachim or Leopold Auer. And that is exactly where Guy Braunstein belongs with this album, his intense violin playing, and his inexhaustible tonal imagination – without even overestimating himself: “These great masters were much better than we are today, they got the gifts of the composers and then they have They have given back their arrangements and their new versions, thus making the violin literature richer. ”