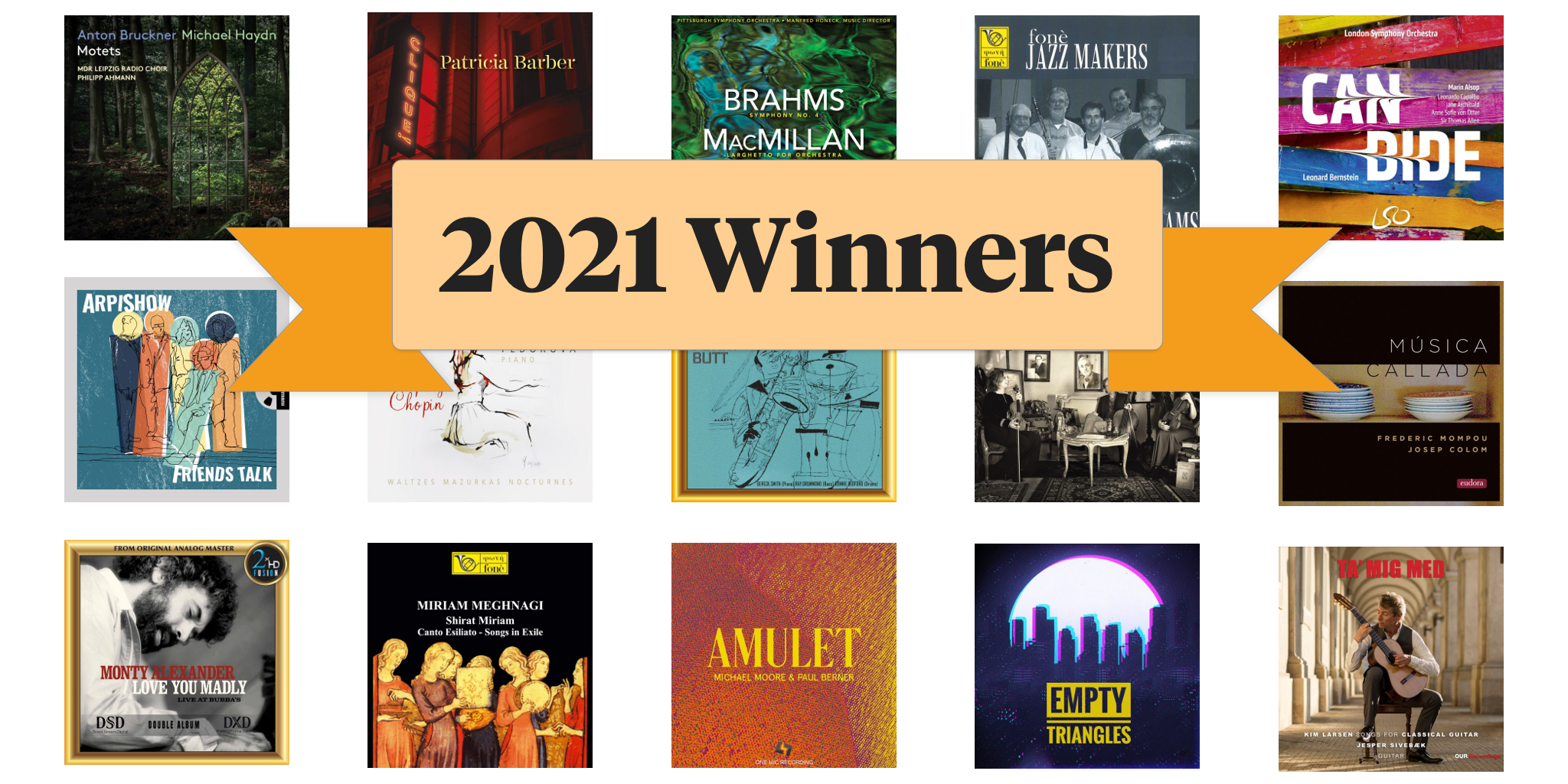 All votes have been counted, and we reveal the 2021 Albums of the Year, as well as the 2021 Audience Award Winner at the very bottom of the page!

Thank you to all 1,238 NativeDSD Music listeners who casted their votes in the various categories!!! ❤️

AND THE WINNER IS…. Clique! by Patricia Barber (Impex IMP7002D)

Now Patricia Barber is back with her new album Clique! This album features 9 classic songs that will be familiar to music fans everywhere. My favorites on the album are This Town and All In Love Is Fair but there are several others that are also very fine. Barber and her Jazz ensemble have performed these tracks many times in Jazz clubs and it shows. The performances are warm and rich. Add in the recording and production team of Jim Anderson and Ulrike Schwarz and you have a Stereo and 5 Channel Surround Sound album that is easily one of the best of the year.

AND THE WINNER IS…. Girl Of My Dreams by Fone Jazz Makers (Fone Jazz SACD014)

The MDR Leipzig Radio Choir is quite fine in these motets from Bruckner and Michael Haydn. These Bruckner choral pieces are far less grandiose than his symphonies and are lovely. As the booklet notes suggest, finding these two composers together might seem like an odd pairing but there are many commonalities in their lives. Most importantly, the MDR Leipzig Radio Choir and the recording engineers have made this a must-hear release.

AND THE WINNER IS…. Take Me Along (Ta’ Mig Med) – Kim Larsen Songs For Classical Guitar by Jesper Sivebaek (OUR Recordings 8226915)

From the booklet notes: “La Muse features two completely different works by French composers both written in 1944:Trio à Cordes Op.105 by Florent Schmitt and Suite La Muse Ménagère’ by Darius Milhaud. One is turbulent and magnificent, the other intimate and poetic. The two composers could not be more different and might be said to clash. And yet, Prisma String Trio feel their works are a beautiful match and complement each other well.“ The first half of the 20th Century was an especially amazing time for music, including these two composers. The Prisma String Trio brings a personal touch to these works, and the results are quite enjoyable. Cobra’s recording is excellent.

Tenor Saxophone player Arnett Cobb is a Jazz Legend who was known as the “Wild Man of the Tenor Sax”. His playing featured elements of Jazz, Swing, Soul and Stomps. On Funky Butt, 2xHD Mastering dips into the catalog of Jazzology Records to bring us a collection of Cobb’s tasty sax playing backed by Derek Smith, Ray Drummond, and Ronnie Bedford. From start to finish this album is exciting and entertaining, offering insight as to how Arnett Cobb influenced many genres of music in his day and for generations to come.

AND THE WINNER IS…. Shaping Chopin by Anna Fedorova (Pure DSD) (Channel Classics 43621)

Anna Fedorova has the perfect touch for Chopin, and Channel Classics engineering captures is perfectly. Her program of “Waltzes, Mazurkas, and Nocturnes is absolutely delightful. She is delicate, she is strong, and she truly tells the story of each piece in her playing. All six (so far) of her Albums for Channel Classics are award-worthy.

AND THE WINNER IS…. Friends Talk (Pure DSD) by ArpiShow (Hunnia Records HRES2114)

Friends Talk features 13 tracks and almost 1 hour of Swing Jazz music. Some tracks are purely instrumental while others also include a vocalist. I found Friends Talk to be very entertaining, full of swinging performances captured in stellar Pure DSD 256 sound quality. One NativeDSD listener called it one of the best albums he has downloaded to date with excellent performances, music and sound quality that is a game changer. That says it all.

AND THE WINNER IS…. Amulet (One Microphone Recording) by Michael Moore & Paul Berner (Sound Liaison SL1048A)

Recorded with One Microphone by Sound Liaison’s Frans de Rond, Amulet is the kind of album that lends itself to this recording technique. Moore’s Clarinet takes the lead and Berner’s Double Bass follows along, with the two musicians participating in a very musical interplay. It is straight forward good music. A pleasure to sit back and enjoy.

AND THE WINNER IS…. Shirat Miriam by Miriam Meghnagi (Fonè Records SACD047)

What a treasure this album is! Miriam Meghnagi sings Jewish songs, accompanied by Guitarist Domenico Ascione. The words are Hebrew, Yiddish, or Ladino, and the songs are from Spain, Italy, and Eastern Europe. These songs are rich in tradition and history of a people scattered across many places, but hearing them for the very first time, with no expectation, I hear so much that reminds me of simple folk songs, some Yiddish Theater, and even French Chanson. Great sound, marvelous singing, I love it!

AND THE WINNER IS…. Love You Madly: Live at Bubba’s (Double Album) by Monty Alexander (2xHD-Resonance Records 2XHDRE1187)

Pianist Monty Alexander is well known for his unique piano style which mixes Jazz with the music of Jamaica where he was born. Many listeners are familiar with his recordings on Concord Jazz and Telarc.

Love You Madly hails from an earlier time, back in 1982 when Alexander played a 13 track, 92-minute set at Bubba’s. The album was recorded to Stereo Analog Tape by Mack Emerman, the legendary founder of Miami’s Criteria Recording Studios. Emerman was a big Monty Alexander fan and brought in a mobile recording setup to record this session. It is a fine album full of excellent Jazz performances. Love You Madly quickly became a #1 Best Seller at NativeDSD Music in 2021. When you listen to the album, there is no doubt why.

Overall, the highest number of votes went to Girl Of My Dreams by Fone Jazz Makers (Fone Jazz SACD014)

The runner-ups of most votes per album – regardless of the category – were Anna Fedorova: Shaping Chopin (Pure DSD) (2nd place) and Prisma String Trio: La Muse (Pure DSD) (3rd place).