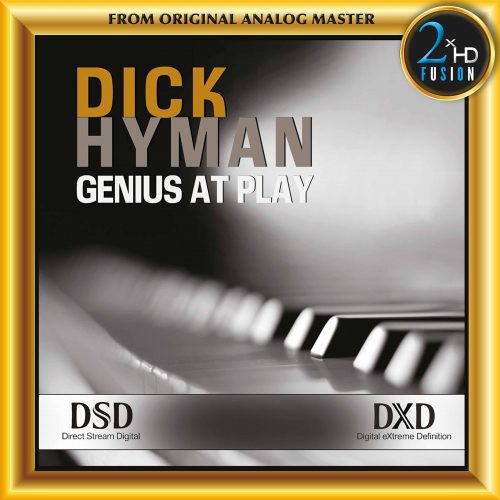 2xHD presents Genius At Play. The album is a collection of improvised Jazz Pieces for Solo Piano by Dick Hyman, the musical ‘Man for all Seasons’. Genius At Play was originally released on the Monmouth-Evergreen label in 1974.

The Analog Recording has been transferred to Stereo DSD and DXD by Rene Laflamme at 2xHD from the Original Analog Tapes. Re-introducing this classic offering for modern audiences! NativeDSD has created a special Stereo DSD 512 edition of the album for our listeners – only available at NativeDSD.Com

Producer Bill Borden says “Dick recorded all the material we are using in three consecutive sessions. We did not have to do any splicing, mixing, or ‘fiddling’ with the takes chosen, an experience new to me since the advent of tape, and a highly pleasing one to Dick. It would be superfluous to comment on the various improvised performances, as they speak for themselves. However, it should be pointed out that these are all titles he has not previously recorded, for each of which he feels a personal affinity, and which have been among his most requested numbers.”

During his long career, Dick Hyman has recorded a number of albums of solo piano. This one is among his best. Mixing jazz standards with music from the stage and pop tunes, he comes up with innovative approaches to each selection.

Of particular interest is the unusually upbeat arrangement of Billie Holiday’s “God Bless the Child,” and a lush treatment of “Sunrise, Sunset” from Fiddler on the Roof.

Unfortunately, this album has long been unavailable since the demise of Monmouth Evergreen. It recently reappeared in the catalog of George Buck’s Jazzology Records because he acquired the entire label’s library.

1 review for Genius At Play